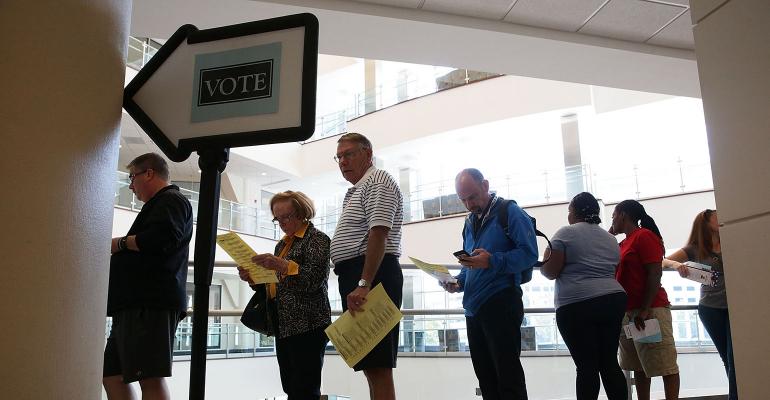 Should Your Portfolio Reflect the Ballot?

No matter who wins on Election Day, stay the course.

Election seasons are one of the most volatile and unpredictable time periods that take place on a consistent basis around the world. With the 2016 presidential election less than a week away, investors are beginning to ask the question, “How should I rebalance my portfolio to protect my investments and take advantage of the election’s effect on the economy?”

We firmly believe that the most beneficial way to invest during this time period is the same as during any other time; with research-backed, factor-based strategies that are broadly diversified across markets, industries and nations. The bottom line is that although it may seem like we should cater our portfolios to presidential elections, that is far from the truth: we believe strategic, research-backed investment strategies are still the optimal choice.

One thing that makes the economic impact of elections difficult to predict is the implementation lag associated with the transfer of power from one president to the next. Once a candidate wins a presidential election, there is a two-month window before he or she is inaugurated and able to implement policies that can influence the economy. This process often takes a considerable period of time.

Take the process of bill writing, for example. A president is not permitted to write a bill, but rather, must propose the bill to a member of Congress, who must then write and submit on their behalf. On average, a mere 4 percent of bills introduced to Congress are passed and signed into legislation.

With this in mind, consider that by rearranging your portfolio prior to an election, you are essentially betting on a potential candidate to win. Similarly, you are also betting that the policy platform that the candidate is running on will ultimately be enacted into law, and that this will be immediately, or at least in the near term, reflected in the stock price. Investing your money on such uncertainties may result in your exposing yourself to significantly higher levels of risk with little to no evidence to support such an investment decision.

The annual returns surrounding past presidential elections further back this claim, suggesting that this is not just theory, but rather a historical trend. If we examine the change in annual returns for the S&P 500 between the year of the election (the incumbent’s final year) and the year directly after the election (the first year the new president is in office) the change in returns is often large, sometimes for the better and other times for the worse. What is interesting about these numbers is that although from election to election they may be very large, the average change between the pre- and post-year election returns has been under 1 percent. This low average highlights that if you are investing for the long run, the best way to handle an election and avoid sustaining a potentially large loss may be to hold your course through the election just as we believe you should in any situation. By utilizing broadly diversified, factor-based portfolios, you may significantly hedge your risk associated with the U.S. election by being exposed to a variety of other nations, markets and investments that will not be nearly as volatile during our election season.

A great real-world example of the implementation, lag and investor psychology in action was the recent Brexit vote. When the news broke that the United Kingdom had in fact voted to exit the European Union (EU), investors across the globe immediately sought shelter from possible exposure to risks created by the UK’s exit. As safety was sought and money was pulled from risky investments, the markets initially dropped significantly. The S&P 500 dropped from a pre-Brexit level of 2113.32 to 2000.54, and the FTSE 100 fell from 6338.1 to 5982.2 over the two trading days following the vote. Just one week later, the markets had fully recovered and were on their way to new all-time highs.

As investors began to analyze the implications of the UK leaving the EU, they began to see the implementation lag associated with the vote. It became clearer by the day that there would be no immediate change to the economy as a result of the vote, but rather as new policies and agreements are worked out over time, the economy would in all likelihood react accordingly. This initial overreaction by investors who failed to realize the implementation lag associated with policy change further backs the claim that investors should not let elections influence their investment decisions. This situation is no different than a current investor seeking shelter from a possible unfavorable change in presidential power. First, it is still uncertain who will win the election and secondly, any immediate changes in the stock market will likely correct themselves and change over time to reflect the policies that are actually implemented by the new president down the road.

In summary, elections often come with periods of increased economic volatility, and as such, investors become more susceptible to making emotional decisions. As the data shows, on average, the change in presidential power will likely have a null effect on returns. As a result, we believe it is more important to focus on having a well-diversified portfolio that will mitigate your investment risk, not just from elections, but any event that may influence the economy and portfolio returns.