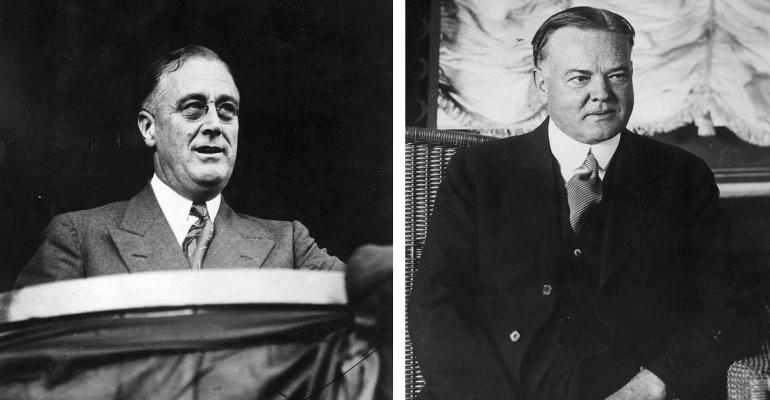 Presidential Parties and the Stock Market

Just under 3 months stand between now and Election Day, and for some of us, that day cannot arrive soon enough. Campaigning has hit a feverous pitch with ads flooding the airwaves and candidates being critiqued and reported on nonstop.

Many are examining which candidate will have the greatest impact on the economy and capital markets. A popular belief is that Republican presidents are better for capital markets. While this belief holds water leading up to a Republican being named to office, it doesn’t hold true during the Republican term as markets tend to perform better while a Democrat is in office.

What better time than now to put that popular belief to the test?

In figure 1 below, we used the Ibbotson SBBI U.S. Large Stock index, to look back at the performance of U.S. large caps during different presidential regimes. The outcome might come as a surprise to some.

Since 1929 and the Hoover administration, there have been 21 four year terms, not including the current term for President Obama. Republicans have held office for 10 of those 21 terms. Interestingly, there have been only four instances when U.S. large caps experienced a negative return (annualized). Three of those four negative periods occurred while a Republican was in the Oval Office.

The worst performing four-year period happened under the watchful eye of a Republican, Herbert Hoover, in which the first year of his presidency coincided with the beginning of the Great Depression in 1929. On the flip side, the best performing four-year term happened during FDR’s Democratic first term which occurred in the midst of the Great Depression. FDR’s New Deal programs started to take place, marking the beginning of the federal government’s willingness to play a bigger role in supporting the economy.

While the 1970s will be remembered for its weak economy and stagflation, the annualized return for large caps between 1977 and 1980 during the Democratic Carter administration was over 11 percent. Reaganomics then ensued, as did robust returns during the Reagan era, 1981–1988. Republicans held office throughout the 1980s and each term resulted in double-digit returns.

President Clinton took over in 1993, as the first Democratic president since Carter, and the stellar performance continued during his two terms, 1993–2000. When Republican George W. Bush, took over the White House the run of positive returns ended as the dotcom bubble burst and the September 11  attacks marred his first term, 2001-2004. Large cap performance deteriorated further under the junior Bush’s administration as the global financial crisis ensued during his second term, 2005–2008. George W. Bush also holds the distinction of being the only president since 1929 to oversee two terms of negative returns for large cap stocks.

As President Obama’s tenure comes to a close, we can look back at his first term and see that large caps faired very well, with an annualized return of over 10 percent between 2009 and 2012.

It is also interesting to look back at the performance of the Ibbotson SBBI U.S. Large Stock index during election years. Markets do not like uncertainty, and other than the uncertainty of the U.S. Federal Reserve’s next move, nothing is more uncertain than what will happen during an election year.

As you can see in figure 2, in the past 22 election years, there have been only four occurrences when large cap stocks ended the year in negative territory.  Interestingly, three of these negative years happened during election years leading up to a Democrat being elected President.  As we noticed in figure 1, three of the four negative presidential terms occurred during a Republican regime.

Worth noting, each of those four years can be attributed to a financial crisis. The 18 other calendar years fluctuate in performance from a high of 43 percent in 1928 to a low of 0.46 percent in 1960.  Even though markets do not like uncertainty, large gains can be achieved during election years.

It is a common belief that the U.S. stock market performs better when a Republican president is in office.  While that belief isn’t so clear cut when you dissect the individual, four-year terms, and look at the annualized performance under each presidential regime, markets do however outperform leading up to a Republican being elected president.  These inconclusive results lend credence to the idea that presidential policies have a greater impact on market returns rather than presidential parties.

Ryan Nauman is a Market Specialist at Informa Investment Solutions. His market analysis and commentaries are available at www.informais.com/blog.