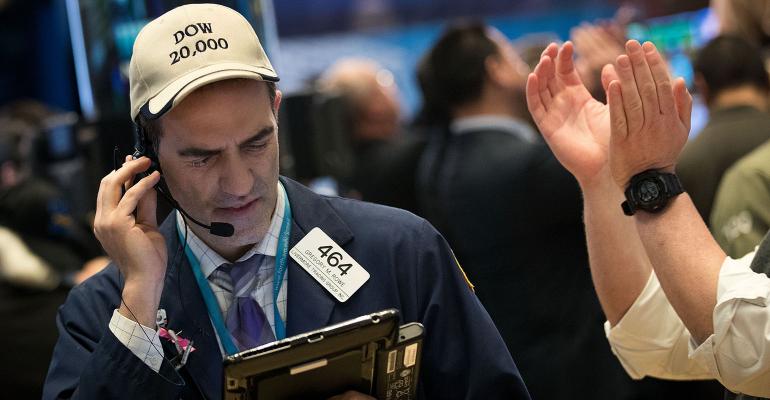 Relax: 20k Is Just A Number

The Dow Jones reaching 20,000 points is not worth all the hype.

The Dow Jones Industrial Average hit 20,000 points and it’s really not that big of a deal.

Catalyzed by the media’s incessant coverage—consumer publications like The Wall Street Journal and Yahoo Finance published live feeds of the Dow chart as the index approached the milestone—and compounded by social media (see #dow20k) echo chambers, one would think hitting 20,000 points, which sounds a lot like winning an arcade game, should result in sirens, streamers and dancing lobsters.

In truth, the financial services industry, populated by professionals paid to care about this sort of thing, seems to care very little about it.

“My father, an advisor since ’64, still has a pin in his desk that reads ‘DOW 1000,’” said Joshua Austin Scheinker, senior vice president of Scheinker Investment Partners of Janney Montgomery Scott. “Just a meaningless milestone.”

“What hurts the retail investor is all the hype.” Scheinker added, “Now, the 80-year-old income investors want to take on the risk [to] join the masses.”

Not to mention, many feel Dow Jones is an outdated index—conceptualized a century ago and skewed by price weighting as opposed to being weighted by market value like the S&P 500. The argument over whether the S&P or the Dow Jones is the better metric for determining the stock market’s strength persists.

“Much like 20,000 is a sentimental number, Dow Jones is a sentimental index,” said David Schiegoleit, senior vice president of investments at U.S. Bank Wealth Management. “It’s antiquated and sentimental, but widely understood and followed.”

At the very least, there’s no debating that each Dow Jones milestone becomes less and less significant—numerically, that is. The jump from 1,000 points to 2,000 reflected 100 percent growth, while an increase from 20,000 to 25,000 would amount to just 25 percent growth.

If drummed up hoopla makes people care, then money managers can’t turn their noses up to how that can affect investments. In the short run, emotion is a driver and can take people from the sidelines and turn them into “fear of missing out” investors.

“The Dow 20,000 does mean something to the public and as a result we have no choice but to pay heed to it; to watch it and to comment upon it,” said Dennis Gartman, a well-known investor, editor and publisher of The Gartman Letter.

What some take away from the 20,000 mark and the stock market’s run leading up to this point is market sentiment for President-elect Donald Trump.

“We’re really optimistic in that we have a changing of the guard,” said Matt Schreiber, president of WBI Investments. “Pro-growth policies could allow for significant market growth.”

Financial advisors, meanwhile, are trying to protect their clients from short-run volatility and say they must focus on market fundamentals; or, in other words, it’s business as usual.

“It is our job as stewards to help clients see through the short-term emotions and focus on the client’s goals,” said Benjamin Lau, co-chief investment officer and principal at Apriem Advisors. “That is especially important at market tops and market bottoms.”

Here are some other thoughts from around the industry about Dow 20,000:

"Do you remember where you were when the Dow hit 15,000? Or 10,000? If you do, and you’re not employed as an Equity Market Chief Strategist at an institutional investment firm, then I’d suggest you get out of the house more often and find a better hobby. If you actually remember and celebrate those occasions, I’d suggest professional therapy."

“Big round numbers can and do have an impact on investment markets simply because investors believe they can have an impact. Yes, the markets are somewhat driven, at least in the short-term, by animal spirits.”

“While the Dow 20,000 milestone is largely symbolic, it does feed into the ‘animal spirits’ mindset driving recent market strength. As we look to 2017, I expect the pace of gains will slow into next year as the timing of Trump’s policies become more clear to investors. Though I am fairly positive on the U.S. economy, I anticipate more volatility in financial markets next year.”

“Humans just have a fascination with round numbers it seems. It’s no different from how people tend to commemorate 50th birthdays or anniversaries with much more fanfare than their 49th. Is the 49th birthday or anniversary any less important in the grand scheme of things? No, but they still seem to hold a special place in our collective consciousness.”

“The publicity surrounding this event may be an opportune time to debate the merits of an index whose underlying stocks are less relevant in today’s economic structure than they were 100 years ago and how the price weighting computation further skews its relevance. For now, however, I’m certain that Wall Street and its pundits have their hats and blowers ready at the helm.”

"This is psychological and a time [when] people get really excited, but when you really, really need to be most careful."