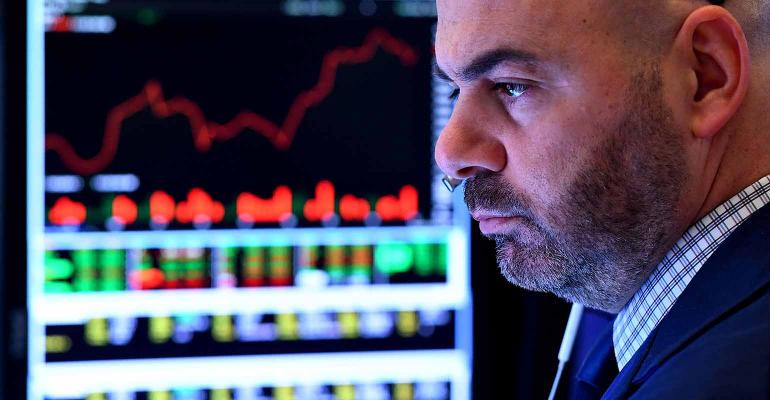 Picking Winners Has Been the Biggest Loser

Portfolio managers have proven they cannot predictably pick winning companies consistently. They may have a better shot at weeding out the losers.

Wall Street’s oldest dogma is to chase winners in the stock market, yet ironically, this strategy has entailed far more losing than winning. Whether it is the savviest of hedge funds or even the endowment managers of the Ivy League, stock picking has amounted to a decades-long fool’s errand.

Instead of picking winners, a better strategy may be to flip the investment paradigm—identify losers and leave them out of the portfolio. In an age of technological change, why not simply exclude the companies failing to adapt and at risk of disruption? Avoiding the losers (i.e., companies trapped in long-term secular decline) may be the best way to win.

Under the religion of Dodd and Graham, entire generations of investors have sought out the roughly 4% of stocks that accounted for virtually all stock market gains over the past century. While an attractive premise, this approach has demonstrably failed.

The SPIVA Scorecard documents the reality. Over the past 15 years ending in 2018, 92.1% of U.S. equity funds underperformed their benchmarks. Moreover, the Credit Suisse Hedge Fund Index, a composite of over 9,000 funds, has underperformed the S&P 500 by a staggering 193.6 percentage points over the past 10 years. As a discipline, stock picking has fared so poorly it can now be said that passive indexes outperform their active benchmarks—a bizarre reversal of theory and practice. The problem is, active managers were picking winners, not excluding losers.

The immutable challenge remains that it is fundamentally unknowable which companies will emerge as market winners, especially in an era of algorithms and program trading. Whereas even the most talented managers have struggled to select winners, even a less experienced manager may be able to identify multiple losers, especially those with businesses fundamentally challenged by technology. Cut out the losers, and you’re left with a portfolio that may be better positioned to outpace the broader market.

Significantly, exclusion-based investing has the potential to drive meaningful active share and achieve outperformance potential. As a case example, excluding only General Electric, once the most valuable and celebrated company in the U.S., from the S&P 500 in 2017 and 2018 would have resulted in 122 basis points of outperformance. Curiously enough, while students everywhere have long sworn by “process of elimination,” professional investors have not been able to eliminate what may be the biggest loser of them all—chasing winners.

Technological disruption is perhaps one of the most significant, forward-facing risks impacting investors and companies today. We live in an unprecedented environment where yesterday’s titans are today’s potential bankruptcies; look no further than the cases of Pan Am, Polaroid, Blockbuster, Toys “R” Us or RadioShack. Each was formerly a leader of its respective industry, before they were systematically disrupted by the accelerating rate of technological change.

Why is technology producing such profound economic dislocations, across all economic sectors? The answer rests in the unique characteristics of the digital revolution, an unparalleled event in human history. While the doubling of processing speed every 24 months predicted by Moore’s Law is common knowledge, its implications are genuinely difficult to fathom; not only does this imply 41% growth per year but also 8% growth every single quarter. Confronted with such staggering numbers, the message for companies is clear—adapt or die. 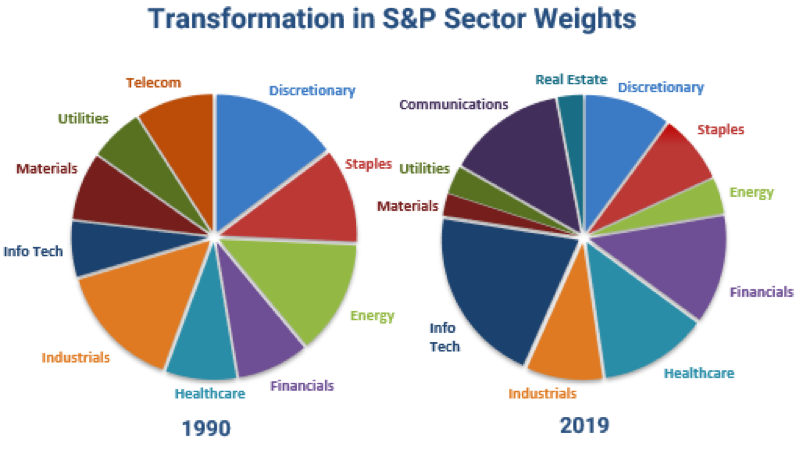 Unfortunately, it is the latter option that an increasing number of U.S. companies have experienced. Comprehensive analyses of corporate longevity have revealed that in the 1950s, the average age of a company in the S&P 500 was roughly 60 years, but this past decade that value slipped below 20 years, and within the next decade it is forecast to fall to 12 years or less.

Poignantly, half of the companies currently in the S&P 500 are estimated to be superseded within 10 years, churned out amid the gyrations of technological currents. Rather than pick the winners of disruption, a superior strategy may be to identify companies trapped in long-term secular decline, and leave these potential losers out of the portfolio. 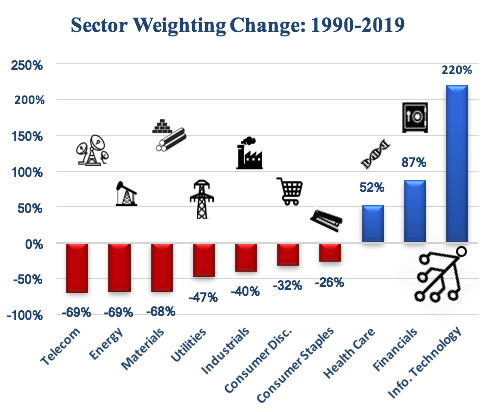 These trends are not arbitrary, but represent the plate tectonics of digital disruption, and this rate of innovation is occurring faster than the market can fully appreciate. Examine the evolution in market sector composition over the past three decades—the walk is hardly random.

In 1993, Telecommunications constituted 10.2% of the S&P 500, but this sector was disrupted so thoroughly that by 2018 it was reduced to four companies and 2.7% of index market cap. Ultimately, the entire segment of economic activity was subsumed into a newly formed Communications sector dominated by upstart social media companies. The real question is—how many more sectors will be eliminated over the next five or 10 years?

Making the Most of a World Set to Indexing 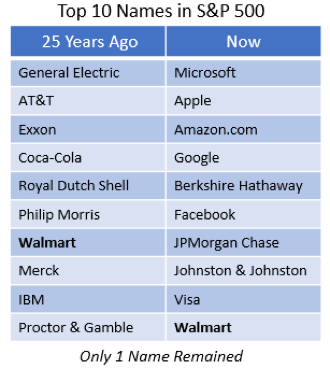 The rise of passive indexing has been a textbook example of a disrupter successfully challenging an industry incumbent, namely active stock picking, that failed to effectively innovate. Despite passive’s momentous growth, which this year eclipsed active assets under management, the strategy is not perfect. The greatest flaw of index investing is that the strategy buys indistinctively every stock in the market, even those in long-term secular decline.

Simply because a company is large and exists does not automatically impute an invulnerability to disruption; the churn in the top-weighted companies evidences this point. Of the top 10 market cap companies in the S&P 500 from 25 years ago, only one remains in that premier echelon today.

Passive indexing will potentially buy any company, irrespective of whether its business model is under threat from disruptive technology. This grave shortcoming comes as a consequence of humans thinking linearly in a world that is changing exponentially. Investing by excluding tech laggards is a fundamental reset on both active stock picking and passive indexing. Not only does this approach aim to hedge the forward-facing risk of disruption, but leaving losers out may be a smarter way to achieve outperformance potential.

Ryan Giannotto, CFA, is the director of research at GraniteShares.