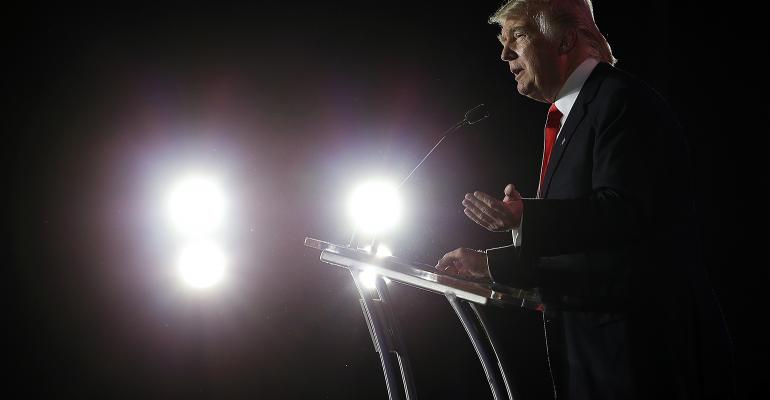 (Bloomberg) -- Trump's not favorite to win the election. If he wins, his administration might achieve little in its early days. Still, markets are woefully underprepared for the possibility of a Trump presidency, Morgan Stanley writes in a note ahead of the candidates' first debate.

As a Bloomberg poll shows Donald Trump in a dead heat with Hillary Clinton going into their first major televised encounter, it's got to the stage where "nit-picking on poll 'skewing' and 'low propensity voters' is less important than fleshing out how investors should deal with a Trump win," says the group of Morgan Stanley analysts, who include Michael Zezas and Andrew Sheets, adding that investors should stop treating the real estate mogul's win like an outside risk.

A Trump victory isn't just an outcome to which pollsters assign a growing probability; it's distinctive in that only a win by the Republican candidate is likely to return a senate that's of the same party as the executive, with most other outcomes signaling a divided legislature. So if it happens, it's full steam ahead with his policies — something that vastly increases the importance of trying to figure out what they are.

The Morgan Stanley analysts finger tax reform and trade protectionism as two obvious areas of Trumpian interest. The caveats come thick and fast: "It's certainly plausible that a Trump administration gets very little done in its early days," they say, and they point to the likelihood of an "accidental stimulus," in which trade protectionism remains mostly talk but tax cuts get enacted, because Trump finds sympathetic partners from the congressional party on that issue.

Still, investors ought to "at least consider the possibility of a Brexit-like outcome for markets in this scenario, where a Trump win is initially jeered by risk markets based on heightened uncertainty, but recover over time when the 'accidental stimulus' becomes apparent," the analysts say.

The other plausible policy scenario that follows a Republican victory on November is that Trump pushes ahead with both agendas — and given the discretion the president can exercise over trade agreements, it's not totally outlandish.

For both scenarios, Morgan Stanley advises a number of hedges, including buying the U.S. dollar against the Mexican peso. Even if the flagship Trump-trade is getting more expensive as the election approaches, "pre-election dates are cheaper" and volatility could well show up within that time frame, Morgan Stanley says.