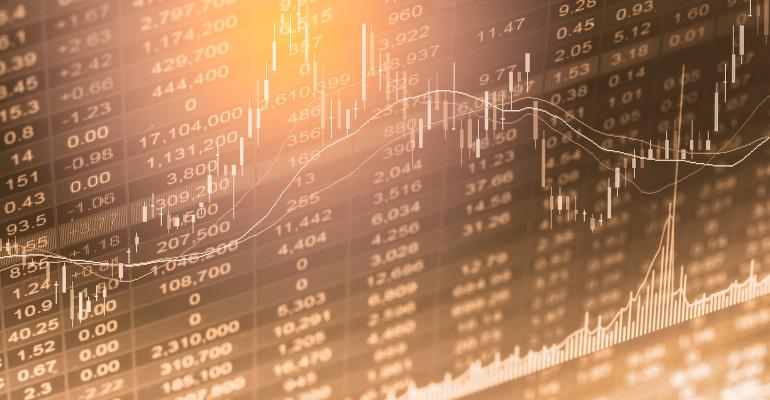 It's a Quant's Stock Market as Computer Programs Keep on Buying

Nailing down the size of the quant space is nearly impossible, but one thing is certain: it's getting bigger.

(Bloomberg) --That money you see sloshing around in the U.S. stock market? It belongs to the robots.

At least, that’s the picture emerging from a growing divergence between quantitative funds and discretionary managers. Systematic strategies have barely budged from near-record participation in U.S. stocks. Meanwhile, fundamental equity long-short managers can’t afford to be anything but picky, considering the market’s narrow leadership.

The result: the largest gap on record between humans’ and computers’ gross exposure to U.S. equities, data compiled by Credit Suisse Group AG show. For now, systematic traders are the dominating force in markets.

“This is the largest footprint for quants. It’s a function of allocation and leverage,” Mark Connors, global head of risk advisory at Credit Suisse Group, said. “The reason why that’s important is that they’re not going away. Complexity isn’t going to be rolled back.” In a sense, the divergence reflects the growing popularity of quant methods over traditional strategies. Nailing down the exact size of the quantitative space is nearly impossible, though some estimates are as high as $500 billion. What’s more certain is that it’s getting bigger. Quant is the fastest growing category on both Credit Suisse’s prime brokerage platform and the broader universe.

Passive and quantitative investors now account for about 60 percent of all equity assets, compared with 30 percent a decade ago, according to data from JP Morgan Chase & Co. The firm estimates that only 10 percent of trading volume now comes from discretionary investors.

But determining whether this computer-driven force dictates market moves is another matter. Quants on the Credit Suisse platform are roughly defined as funds that invest in thousands of equities and trade dynamics, rather than making stock-specific bets. Since they use different signals and time horizons, their combined impact is likely muted.

“Diversity of market participant trading is a very important element of a healthy market. Quant funds certainly add to that diversity, and I feel that is very good,” said Jaffray Woodriff, co-founder and chief executive officer of Quantitative Investment Management, which oversees $3.5 billion. “Funds that are completely uncorrelated to everybody else and that also trade a lot of volume are very good for the liquidity of the investment ecosystem.”

That hasn’t stopped some from pointing fingers.

Through Monday, the Nasdaq 100 Index had its worst two-day slide in nine months. Yet the strongest indicator of whether a stock in the gauge tumbled was not its industry, but momentum -- or the strength of a share’s gains over the past year. That kind of proportionality is the hallmark of a systematic strategy that unwound momentum positions, said Andrew Lapthorne, global head of quantitative strategy at the bank.

Regardless of quantitative investors’ behavior, fundamental managers are ceding whatever control they have left. Gross exposure to U.S. stocks among equity long-short funds, the largest category of discretionary investing, has dwindled in 2017 to near a record low. The closing out of short positions that burned managers is partially to blame for that, according to Connors.

Over the past three months, the most shorted equities have outperformed hedge fund favorites by nearly 7 percentage points, according to baskets compiled by Goldman Sachs Group Inc. Meanwhile, narrow leadership has made it difficult to hold bullish positions on a variety of industries.

“You can’t get bigger if half of your book isn’t performing,” Connors said. “They’ve had to be long tech because that’s all that’s worked.”

Then, there are the quants, who hit the highest gross exposure to equities on record around May 12, data from Credit Suisse show. It’s since come down slightly, but still remains elevated. As volatility in the stock market stays low, returns among quantitative strategies have been compressed, likely compelling managers to increase their leverage to juice up returns, Connors said.

Likewise, Quantitative Investment Management’s Tactical Aggressive Fund, a $1.2 billion equity fund, has higher than average gross exposure, according to Woodriff, who cited the low volatility and high dispersion environment. That’s paid off, as his fund rose 13 percent in May to round out a 55 percent gain for the first five months of the year, according to an investor document seen by Bloomberg News.

“Discretionary managers come and go, and can affect the volatility of the market more. When they take risks, they sometimes bet the farm,” Vassalou said. “Quants focus on a lot of assets that make up their portfolio. They’re less likely to be impactful overall for any particular stock.”