/sites/all/themes/penton_subtheme_wealthmanagement/images/logos/footer.png
Recent
Recent
Michael Kitces' #FASuccess Podcast: Beth Jones' Method to Deepen Client Relationships
May 16, 2022
Seven Must Reads for the CRE Industry Today (May 16, 2022)
May 16, 2022
Apollo Makes $1 Billion Bet on Indian Property With Lending Plan
May 16, 2022
McDonald’s Quits Russia as Country’s Isolation Increases
May 16, 2022
Featured
The 10 Best and 10 Worst States in Which to Retire in 2021
Jul 15, 2021
Poll: 15 Classic Books on Investing and the Markets
Apr 03, 2020
Fifteen Must-Listen Business Podcasts for Advisors
Aug 14, 2020
Celebrity Estates: Jay Leno and Planning for Classic Car Collections
Feb 22, 2022
Bloomberg
brought to you by 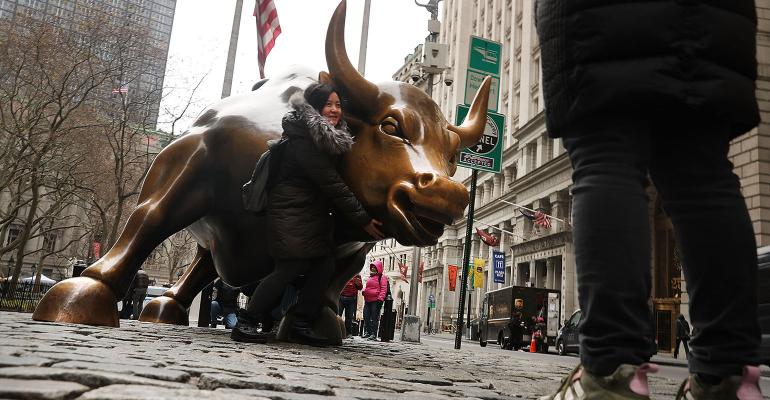 Investors Talk Up Bull Market, But Follow Their Money

It took Americans a long time to get behind this bull market.

(Bloomberg Gadfly) --The U.S. stock market rally that has raged since March 2009 -- the S&P 500 is up 249 percent since its post-financial crisis low that month -- has often been called a hated bull market. It took Americans a long time to get behind this bull market. From March 2009 to November 2016, only 31.8 percent of those surveyed on average thought that stocks were headed higher. In the meantime, the S&P 500 has posted a positive total return for eight consecutive years since 2009.

In December, sentiment suddenly spiked: 45.5 percent of those surveyed were bullish, up from 30.9 percent the month before. It happens that stock valuations reached a notable high in December, too. For the first time since the financial crisis, the cyclically adjusted price-to-earnings ratio climbed to 28. Both valuations and sentiment have climbed further since then. All of this reinforces the stereotype of ordinary investors as rubes who perpetually mistime the market. But the historical survey data suggests that reputation may be undeserved.

Granted, there have been times when sentiment was stunningly misguided. For example, Americans were high on stocks from June to August 1987, just two months before the savage October stock market crash that sent the S&P 500 tumbling 31.5 percent in two weeks. Americans were also feverish from 1997 to February 2000 at the peak of the dot-com bubble, and then downright depressed during its aftermath in 2001 and 2002.

At other times, however, sentiment has been amazingly prescient. Americans were unusually confident in 2003, just as U.S. stocks began a multiyear winning streak. And they turned a deep blue in September 2007, well before it was evident that a financial crisis was underway. In fact, sentiment hit an all-time low of 18.1 percent in March 2008, a month before Bear Stearns collapsed.

Obviously, how Americans say they feel about stocks and how they invest their money may be entirely different. When I looked at asset flows to U.S. stock mutual funds and ETFs since 1993 -- the earliest year that numbers are available -- I found that investors have made better decisions than they get credit for.

According to Morningstar, for example, the annual net asset flow to U.S. stock funds averaged $192 billion during the dot-com craze from 1995 to 1999. But in the bear market that followed from 2000 to 2002, the average net flow actually increased to $203 billion a year. Investors also appear to have navigated the financial crisis and its aftermath better than advertised. A record low $9 billion flowed to U.S. stock funds at the height of the crisis in 2008. When stock valuations tumbled to multidecade lows in 2009, fund flows swelled to $496 billion, the highest one-year flow on record. Fund flows remained strong in subsequent years -- an average of $399 billion a year from 2009 to 2014. But as valuations climbed, fund flows slowed to $188 billion in 2015 and $163 billion last year.

Americans may say that they’re finally behind this bull market, but they’re betting less and less money on it. Perhaps ordinary investors are savvier than everyone thinks.