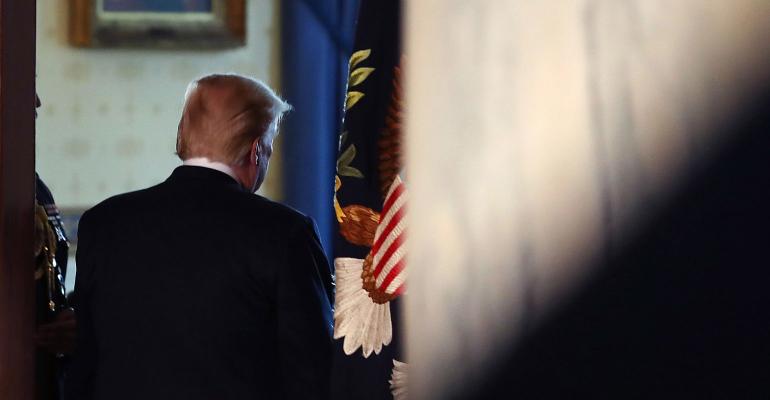 How Would Markets React to a Trump Impeachment?

Mercer Advisors’ Chief Investment Officer Don Calcagni looks at what the markets might do if President Trump is impeached.

Some have suggested that the markets, riding high on a “Trump bump” of promised tax reform and infrastructure spending, could be highly volatile should there be an impeachment of the president. When news broke that former Trump advisor Michael Flynn had reached a plea deal with Special Counsel Robert Mueller, the odds of a Trump impeachment spiked to over 40 percent on the political betting site PredictIt.org. Markets sharply recoiled with the Dow immediately falling over 300 points.

Yet markets recovered by the end of the day, and posted a record high the day after. If markets hate uncertainty, how is it that they could so quickly shrug off the growing possibility of impeachment? The obvious answer: The prospect of a Trump impeachment does not introduce more uncertainty into the markets. There are at least five reasons why this is the case:

Second, there is no historical evidence that markets would decline in response to impeachment. Our only real historical precedent would be the impeachment of Bill Clinton in 1998. From when the House voted to start impeachment proceedings on October 8, 1998 to the Senate’s acquittal on February 12, 1999, the S&P 500 Index rose 28 percent, according to FactSet data.

Critics counter that the market fell nearly 20 percent in anticipation of Clinton’s impeachment. However, to suggest the market sell-off of mid-1998 was solely in anticipation of impeachment is a weak argument. There were other disruptive events at the time that more likely explain the market’s decline, such as Russia’s devaluation of the ruble in August (and subsequent debt default) and the collapse of hedge fund giant LTCM. Nevertheless, even if the mid-1998 sell-off was solely in anticipation of Clinton’s impeachment, markets fully recovered by late November 1998—just as the House was preparing to impeach him. Despite the volatility, the S&P 500 returned 28.58 percent in 1998.

What about the resignation of President Nixon? Markets fell 42 percent from January 1973 to August 1974, a period that includes the conviction of the Watergate burglars and Nixon’s resignation. During this time, oil prices quadrupled and inflation spiked to 12.2 percent. To argue that Nixon’s resignation alone caused a 42 percent decline in equities is to ignore other market-moving events at the time. Subsequently, the historical evidence is inconclusive.

Third, there is little evidence the current bull market has been Trump-inspired, despite the president’s claims to the contrary. This market has been driven by corporate earnings growth, a slow but steady economic expansion, and falling unemployment. These macro trends didn’t begin with the election of Trump. One could easily argue that the current rally is really an extension of the bull market that began long before Trump’s election.

Proponents of the “Trump bump” argument counter that the market rose 3 percent in the two weeks following the election. But to argue that the election of President Trump was the reason for those gains is specious. How do we know the market’s rise after the election wasn’t a relief rally, thankful that the election had finally passed and Hillary Clinton had conceded? After all, the peaceful transition of power is a risk-reducing hallmark of any democracy. Anything that reduces risk would push markets higher. Further, to argue the market rise in the immediate aftermath of the election was solely attributable to President Trump is to ignore the fact that the Republican Party had won the election and now had single party control of government. Separating the market impact of Trump’s election win from that of the Republican party’s is a difficult exercise.

Fourth, the only tangible Trump economic policy propelling markets is the prospect for corporate tax reform. The odds of tax reform becoming law are already high, with betting markets setting the odds of passage before March 31, 2018 at 90 percent. As a result, it’s unlikely Trump would be impeached or removed from office prior to the passage. Thus, with tax reform already a virtual certainty, is there really anything markets would miss if President Trump were removed from office?

Finally, if President Trump were in fact to be removed from office, he would be replaced by Vice President Mike Pence. Is there anything markets would miss in Trump’s absence that a President Pence wouldn’t deliver?  So, the real question centers around how markets view a prospective Pence White House relative to the current Trump White House. An establishment Republican, Pence would likely run a business friendly, less dramatic, and a more predictable White House. And if the axiom that “markets hate uncertainty” is true to any extent, a more certain and predictable White House should have a positive impact on markets.