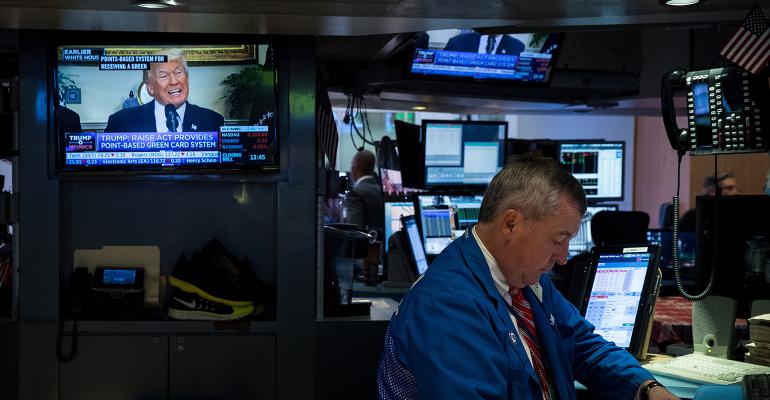 How Responsible Is Trump for the “Trump Bump?”

Likely less than he’d have you believe.

Greg Ip’s piece in The Wall Street Journal on Thursday— “Trump Should Give Thanks, Not Take Credit, for Economic Growth”—struck an interesting chord.

To market and economy followers, the subheading, “The president’s presence alone can’t explain why the whole world is enjoying growth and booming stock markets,” surely is obvious, but perhaps it’s worth repeating, given that Trump this week laid modest claim for it all when he said, “The reason our stock market is so successful is because of me.”

Ip points out how better economies overseas are in good part responsible for the rather global tenor of stocks markets, which are unrelated to Trump’s bombast and, perhaps, even at odds with his temperament on things like trade. And, let’s not neglect, still limited wage growth and weak labor participation, for which I don’t hear the administration taking credit.

This piece inspired a chart. The chart below shows the S&P 500 rebased to 100 on the day of Barack Obama’s inauguration in 2009, along with demarcations for that event, the 2016 election and Trump’s inauguration. Overlaid with what are the combined central bank balance sheets of the Fed, European Central Bank, Bank of Japan and Bank of England, which started this era at about $4.2 trillion in aggregate and now stand at $14.8 trillion. As the Bard put it, “There are more things in heaven and earth, Horatio, than are dreamt of in your philosophy.”