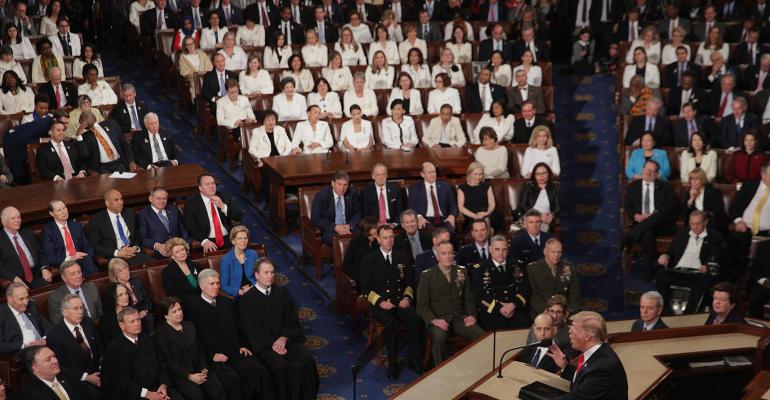 How Financial Advisors Can Join the Fight for Gender Equity

Whether through individual equities, ETFs or SMAs, financial advisors can incorporate gender lens investing in client portfolios without sacrificing returns.

The energy in the room during the 2019 State of the Union address was contagious. A group of women dressed in white stood out from the sea of dark suits in celebration of a historic moment; the 116th Congress is historically the most diverse, with 127 women being sworn into the legislative body. Despite this being a time of firsts—the first woman elected to Congress in various states; the first Native American, Muslim and combat veteran women serving—it is not the first, nor the only initiative focused on increasing the visibility of women’s issues and highlighting the need for gender equality.

The past couple of years have seen a new wave of women’s rights activism. The #MeToo movement put issues like sexual assault at the center of the conversation on gender equality and led to at least 200 men losing major roles after public allegations of misconduct. The #TimesUp organization has spearheaded the battle against workplace inequality, advocating to change the face of corporate boardrooms through improved diversity policies.

These battles have not gone unrecognized, and have created a platform for discussion and progress, but the battle is far from over. We have not yet achieved gender parity across major socioeconomic measures. The gender pay gap in the U.S. remains at a staggering average of 23 percent, women entrepreneurs start their businesses with approximately half the capital of their male counterparts, and women hold fewer than 18 percent of corporate board seats in the active companies of the Russell 3000 index.

If advisors want to effect real change, they need to actively partake in the conversation, by allocating capital to strategies that reflect these values. In other words, they need to make their investment decisions through a gender lens: one that identifies investing in women as an opportunity rather than a niche market or a box to check.

What is Gender Lens Investing (GLI)?

There are multiple ways for advisors to get involved and help their clients incorporate GLI into their portfolios. Three good places to start are workplace equity, access to capital, and female-focused products and services.

In the realm of public equities, advisors can address workplace and value chain equality by first examining existing portfolio holdings for the gender balance of their management teams. Then they can help shift capital away from companies with under-representation and toward funds and enterprises that promote female leadership. In the venture capital and credit world, investors can improve access to capital by investing in female-founded enterprises, and increase banking penetration by granting women more access to credit. Investors can also target projects and companies that provide products and services for women, especially those in underserved markets.

Despite misconceptions that the market for GLI is still small enough to not warrant attention from financial advisors, the number of assets invested in GLI products has accelerated from $100 million to $2.4 billion in 4 years, according to a report published by Veris Wealth Partners.

Similarly, despite misconceptions that GLI comes at a detriment to returns, an MSCI report shows that companies with at least three women on the board outperformed companies with no female directors in gains to both Return on Equity (ROE) and Earnings Per Share (EPS), suggesting a strong correlation between board diversity and realized returns.

How Can Advisors Harness Gender Lens Investing and Empower Women?

Advisors can introduce GLI across all asset classes. On the passive side, existing off-the-shelf products such as gender equality ETFs are gaining traction resulting from increased capital allocations and positive returns—for example, the State Street Global Advisors Gender Diversity Index ETF has yielded an 11.7 percent return since its inception in 2016. However, ETFs’ lack of customization may fail to fully reflect a particular client’s needs and values, leading many advisors to seek gender balance through the creation of Separately Managed Accounts (SMAs). SMAs tightly track the performance of an existing benchmark but are constituted of individual holdings that can be chosen by an advisor to reflect specific client values and financial needs.

At Ethic, we’ve created tools that can be used by advisors during client interactions to better understand whether existing investments help bridge the gender inequality gap. After identifying the gaps, we collaborate to identify enhancement opportunities and create an alternative, more gender-balanced portfolio powered by multi-factor optimization.

To determine the extent of the improvement, one metric we provide is wage gap reductions: in dollars, how much your optimized portfolio improves the wage gap, compared to the wage gap in a given benchmark. Then we translate this metric into familiar terms: the companies in one of our GLI clients’ portfolios shrunk the wage gap by a total of $79 million annually—equivalent to 7,965 years of college tuition payments, or 6,637 years of rent payments.

For illustrative purposes only; individual results will vary.

If incorporating gender into our investment decisions is to become the norm instead of the exception, it’s critical to augment moral arguments with market arguments: the scope and penetration of GLI has increased significantly during the past decade, and there is enough evidence to support that it does not come at a detriment to returns.

Achieving this pressing goal requires financial advisors to understand both ends of the investment equation: markets and investors. Advisors should foster a broader understanding of the ways in which capital markets can be used to advance a broad swath of women’s issues, while at the same time strive to understand and serve their clients with a personalized approach to GLI. By expanding this offering, advisory firms can become advocates of this movement.

Despite the progress made to date, there is still a long way to go in the quest for gender equality. Aligning our investments to our values must stay at the forefront of the conversation. Here at Ethic, we consider this effort to not only be our fiduciary duty but also pivotal to our mission of accelerating the transition to sustainable investing.

Juliana Granados is the Head of Client Solutions for Ethic. Previously, she worked in the Investment Banking division at Morgan Stanley, conducting financial and strategic analysis on M&A and capital markets transactions.