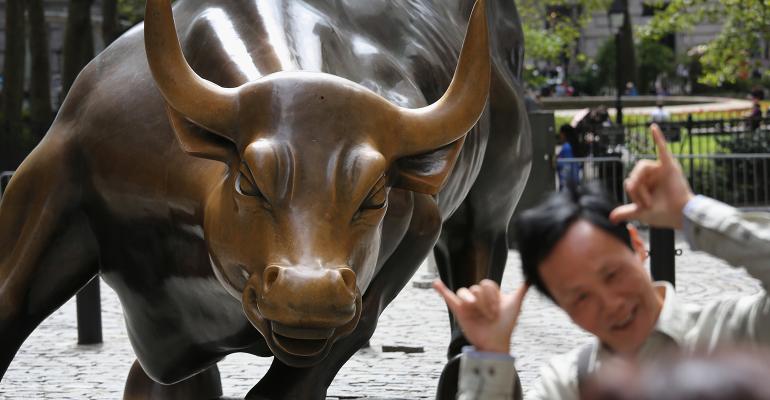 How Does This Bull Market Stack Up?

Happy eighth birthday to the bull market, lack of industry stands holds back ESG investing and Morgan Stanley teams with Ascensus on ClearFit.

The bull market celebrated its eighth birthday on Thursday, and while that milestone seems pretty lofty, let's not forget bull markets of the past. According to Fortune, this is the second longest, following the bull market that lasted 113 months from October 1990 to March 2000, gaining 417 percent during that time. This bull cycle, which started March 9, 2009, has seen the S&P 500 gain 249 percent, making it the third all-time best. The baby bull market of the 1950s, which lasted seven years, saw a gain of 267 percent, putting it at second-best performing. While no bull market has made it to its 10th birthday, Sam Stovall, chief investment strategist for CFRA, writes that historically, the longest bull markets "...went out with a bang and not a whimper. Like an incandescent light bulb, they tend to glow brightest just before they go out." He added, "Bull markets don’t die of old age, they die of fright. And what they are most afraid of is recession." Most asset managers, owners and consultants agree that ESG investing is more important than it was three years ago and that its importance will continue to grow. A survey by Adveq and the Chartered Alternative Investment Analyst (CAIA) Association found that 78 percent of participants thought the importance of ESG will grow in the next three years. Most of the participants also said a lack of "clear industry standards" was hindering its development. An overwhelming 89 percent said better-defined standards would improve its growth. Morgan Stanley announced a new partnership with Ascensus to develop ClearFit, a new turnkey retirement program designed especially for small 401(k) plans. Morgan is providing fiduciary services and the investment management process, while Ascensus is contributing its administrative and recordkeeping services as well as technology to let participants access accounts online and on mobile devices. Morgan will also serve as the ERISA Section 3(38) investment manager and offer a menu of target date funds based upon the firm’s proprietary retirement glidepaths. The idea is to provide business owners with a competitive retirement plan without complex administrative duties. “We take the burden off their shoulders and onto ours, so they can remain focused on building their businesses, while giving their employees a clear and convenient way to plan or prepare for retirement,” said Marc Brookman, a managing director at Morgan Stanley Wealth Management.