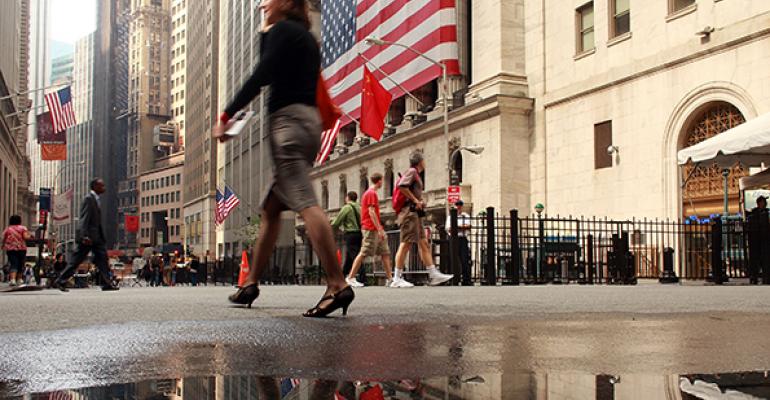 Fast Trader Pulled a Fast One on Some Customers

The $22.6 million settlement between Citadel Securities and the SEC proved -- sort of -- that SIP latency arbitrage does occur.

(Bloomberg View) --The basic way that regular people buy stock is like this:

This rubs some people the wrong way. Who asked for Citadel? Why is Citadel cutting in and insisting on selling you the stock, instead of leaving you alone and letting you trade on the stock exchange? Presumably Citadel has to get the stock from somewhere, in order to sell it to you, and since it's a profitable business, it's probably paying less for the stock than you are. So why can't you just get that deal? What value is Citadel adding? What's even more suspicious is that Citadel is probably paying your broker for the right to do this trade with you. Again: Citadel is profitable, so if it's paying your broker for the right to sell you stock, that probably means it's making a profit on selling you the stock.

But the weirdest part is that Citadel is selling you the stock for a lower price than what's available on the public exchanges. For instance, if the public exchange shows the stock offered at $40.02, Citadel will sell you that same stock for $40.016, saving you like 40 cents on a 100-share order.  (This is called "price improvement.") It's giving you a (slightly) better deal than you'd get elsewhere! And paying for the right to do it! And still making a profit! It is just suspicious. It looks like a trick. How does it work?

There is a straightforward boring market-microstructure answer, but that answer has not exactly ignited the public imagination. (It goes like: "Retail order flow involves less adverse selection than public markets, so market makers who can segregate that flow can profitably trade at tighter spreads." So boring!) But there is also a sexy conspiracy-theory answer, which has become pretty popular. It goes like this:

This is called "SIP latency arbitrage," though if you call it "front-running" instead, I guess no one will stop you. Whenever I mention it to electronic traders, they laugh, but it's a tired, rueful laugh. Why would this be a thing? The SIP latency -- the time delay between the direct feeds and the SIP -- just isn't big enough (and it's getting smaller) for this to work very much. The odds that an order will come in when the SIP has one price and the direct feeds have another are pretty small. About 97 percent of trades occur when the prices match. It would be weird to build up a whole retail market-making strategy -- and pay to interact with retail orders -- just for the 3 percent of time that you might make an extra penny from SIP arbitrage. The SIP latency arbitrage theory makes almost no sense, but it is weirdly, enduringly popular.

Actually two algorithms with two names. If you think about it for a minute, you'll realize you need two strategies to do SIP latency arbitrage:

The first strategy is simple enough: Sell to the customer at the high SIP price, when you know you can buy in the market at the lower "real" price. Citadel called this strategy "FastFill" :

One strategy, known as FastFill, was triggered when the best price from one or more of the depth of book feeds that FastFill referenced was better than the best price disseminated by the SIP feed. Assuming all other eligibility conditions were met, FastFill immediately internalized a marketable order at the SIP NBB or NBO, as applicable, or better.

For example, if CES was handling a marketable order to buy shares, and the SIP best offer was $10.01, and the best offer from one or more of the depth of book feeds was $10.00, FastFill immediately internalized the order using the SIP offer of $10.01 per share. FastFill did not internalize at or seek to obtain through routing the better $10.00 price from the depth of book feeds.

The second strategy is sort of the reverse: If the SIP is better for the customer than the direct feed, you don't want to sell at the SIP price; you want to sit around twiddling your thumbs until the SIP price catches up to the direct-feed price. Citadel's algorithm for this was called "SlowFill." No, I'm kidding. It should have been. But it was called "SmartProvide": Citadel would send the order to the market at a price that was lower than the SIP price (which, in turn, was lower than the "real," direct-feed price). Because it was pretty far away from the market, it probably wouldn't execute. (If it did -- and it did 18 percent of the time -- then, hey, great for the customer.) Then it would come back to Citadel -- at which point the SIP would probably have caught up to the direct feeds, and Citadel could internalize normally.

Honestly it's hard to know what Citadel was supposed to do in that situation. The SEC says that "some of the orders CES internalized after SmartProvide displayed an order in the market on their behalf received a price that was worse than they would have received had CES immediately internalized at the SIP" price, but the point is that the SIP price was stale, and it's a bit rough to expect Citadel to take a loss trading at the stale SIP price.

But SmartProvide is just an intriguing anomaly; the real action is in FastFill, which is literally, exactly, the paranoid fantasy of SIP latency arbitrage: Citadel had a specific named algorithm designed to profit by selling to customers at $10.01 when the real, up-to-date price that Citadel saw was $10.00, giving it a risk-free profit. Usually this profit was sort of hypothetical; it's not like Citadel literally sold shares to the customer at $10.01 and then immediately raced out and bought those shares in the market at $10.00.  So it's not exactly the risk-free profit you hear about in latency-arbitrage theory, though it's in the same general area.

It's not quite as bad as all that. For one thing: It was pretty small potatoes. FastFill ran from June 2008 through January 2010. At that time, Citadel's retail internalizing business traded about 1.2 million orders for 2.3 billion shares per day. FastFill was about 0.4 percent of Citadel's retail order flow, a total of about 2.7 million orders over that time. (SmartProvide executed another 690,000, starting in late 2007.) Citadel's $22.6 million settlement includes only $5.2 million of "disgorgement," which is presumably the SEC's best guess at how much money Citadel made on these two strategies. By comparison, Citadel reports statistics on how much money it saves retail investors with price improvement. For 1,000-share-ish orders -- which seem to be around Citadel's average order size -- the savings are on the order of $5 or so per order. That means that Citadel pays retail investors more in price improvement per day than it made on SIP latency arbitrage during the whole two-year period at issue here. The SIP stuff -- "the SIP stuff that the SEC caught," if you're paranoid -- is just teeny tiny stuff.

For another thing, this wasn't exactly a risk-free profit. Even FastFill trades were sometimes good for customers. The SEC grants Citadel this concession in the settlement order:

When FastFill internalized an order, it filled the entire unexecuted portion of the order at the SIP NBB or NBO, as applicable, and did so (other than in the circumstances described in Paragraph 31), regardless of the number of shares associated with the SIP NBB or NBO or the best bid or offer from one or more of the depth of book feeds. Because of this feature, which provided a price benefit as compared to the liquidity displayed in the market and price improvement that CES added, FastFill improved the overall execution price for a substantial number of (predominantly larger) orders.

Also: The SEC never quite comes out and says that this is illegal. Instead, it criticizes Citadel's disclosure:

During the relevant period, CES provided a written disclosure to certain retail broker-dealer clients that described a market order as an “[o]rder to buy (sell) at the best offer (bid) price currently available in the marketplace,” and made other, similar representations to its clients. As discussed above, these statements suggested that CES would either internalize the marketable order at, or seek to obtain through routing, the best bid or offer from the various market data feeds CES referenced. These statements were materially misleading in light of the way that FastFill and SmartProvide functioned.

Was it illegal? Who knows? Brokers have a general obligation of "best execution," but it was long a mystery whether that should be measured against the official SIP feed or against the direct feeds. The SEC never determines here that Citadel's executions weren't "best execution," and in some cases -- like selling 1,000 shares at the SIP price for 200 -- they probably were. But even if you're not sure about the substance, you can always go after disclosure.

There are two basic ways to think about high-frequency trading -- or about anything in financial markets, really. One approach is: This is a sensible economic phenomenon, and also sometimes people cheat. If that is your assumption, then you explain the retail execution business in terms of market microstructure and adverse selection. And then you hear that sometimes Citadel did this SIP latency arbitrage thing, and you think, "hahaha, you cheeky little imps!" And you have a good laugh at their chutzpah, and fine them a few million dollars.

The other approach is: This is a pure creation of cheating and corruption, and any economic benefit is a minor accident. If that is your assumption, then latency arbitrage must be at the heart of the retail execution business; it's how high-frequency traders can make a risk-free profit by front-running retail investors. And if that's what you think, then the SEC's order must be a disappointment. It finds SIP latency arbitrage, yes, but so little of it, and for so little money. The problem is real, or was real, but it's so small. It hardly explains anything.

Matt Levine is a Bloomberg View columnist. He was an editor of Dealbreaker, an investment banker at Goldman Sachs, a mergers and acquisitions lawyer at Wachtell, Lipton, Rosen & Katz and a clerk for the U.S. Court of Appeals for the Third Circuit.