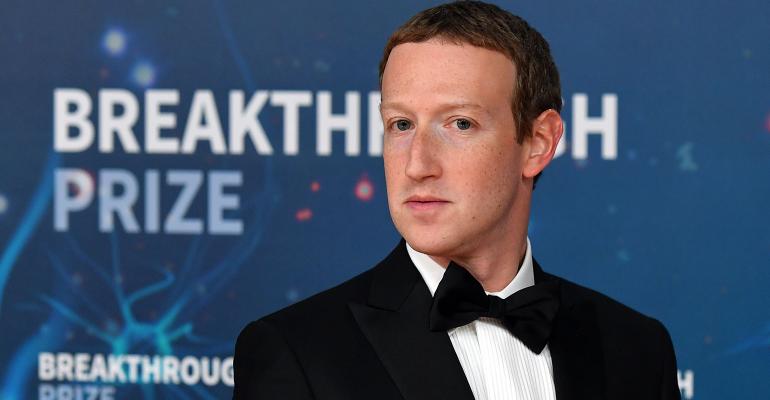 Investors are right to be concerned by Mark Zuckerberg’s strongman governance of the company.

(Bloomberg Opinion) -- If you’re not clear on Environmental, Social and Governance investing, you’re not alone. The Department of Labor appears to be just as confused. Luckily, Facebook Inc. may serve as an example to help clarify the burgeoning investing movement.

The Labor Department issued a proposed rule recently that is being widely interpreted as a ban on ESG investing in retirement accounts. A news release said the rule “is intended to provide clear regulatory guideposts” for corporate pensions and 401(k) plans around ESG investing. What it’s actually doing, however, is sowing utter confusion.

Related: DOL Puts Guardrails Around Use of ESG in Private Retirement Plans

“Private employer-sponsored retirement plans are not vehicles for furthering social goals or policy objectives that are not in the financial interest of the plan,” Secretary of Labor Eugene Scalia said. But ESG has nothing to do with furthering social goals or policy objectives. By definition, ESG investing is strictly a financial endeavor, an attempt to improve the performance of portfolios by limiting their exposure to companies whose environmental, social or governance policies, or lack of them, are deemed risky. In that regard, it’s no different from striking a balance between stocks and bonds, investment-grade bonds and junk, stocks of large and small companies, or any number of decisions investors routinely make to manage risk and attempt to boost risk-adjusted returns.

Consider Facebook. The social media behemoth has problems. A growing number of big corporate advertisers such as Coca-Cola Co., Starbucks Corp., Microsoft Corp. and Ford Motor Co. are pulling their ads, fearing they might appear alongside hate speech, misinformation and other divisive content routinely posted on the platform. Facebook also faces a slew of antitrust inquiries from Congress, the Justice Department and a coalition of state attorneys general, as well as increasing bipartisan calls to remove legal protections that limit the company’s liability over content posted by users.

Complaints about Facebook aren’t new. There have been widespread concerns about how the company handles user data since at least 2018, when news surfaced that Cambridge Analytica had obtained personal data of up to 87 million users. But Facebook has largely ignored its critics, mainly because co-founder and Chief Executive Officer Mark Zuckerberg controls the company and doesn’t appear to share the concerns, at least not enough to do anything meaningful about them. So far, Zuckerberg has made mostly symbolic gestures, such as rolling out a new voter information hub and agreeing to meet with civil rights groups who organized the advertising boycott.

Zuckerberg no doubt prefers to wield absolute power, but it’s a risky proposition for Facebook’s shareholders. There is growing evidence that companies with strong governance generally perform better and are less likely to fail than those with weak governance, which also makes them a less volatile and better-performing investment over time. The best ones have policies that hold management accountable and balance the competing demands of shareholders, creditors, workers, suppliers, customers and regulators. Suffice it to say, while Zuckerberg is on the throne, Facebook has few of those checks and balances.

That’s a problem because Zuckerberg is the sole arbiter of what is and isn’t a hazard for Facebook, even if all indications are to the contrary. And clearly, not everyone at the company agrees with Zuckerberg’s sanguine outlook. Facebook employees recently staged a virtual walkout, and some senior figures publicly expressed their disapproval of Zuckerberg’s laissez-faire approach to policing content. If there were a greater diversity of opinion in Facebook’s decision-making process, perhaps it would have been more attune to the many threats it now faces.

The risk posed by Facebook’s strongman governance is the “G” in ESG. Not surprisingly, Facebook receives poor marks for governance. Institutional Shareholder Services, a leading provider of ESG ratings, gives Facebook a 10 for governance, the highest risk score on its 10-point scale. And according to various governance metrics tracked by Bloomberg, such as percentage of independent directors and board size, governance has weakened at Facebook over the last decade.

For investors worried about the governance risk around Facebook, reducing their exposure to the company, or even eliminating it entirely, is a reasonable financial move — one that is consistent with, in fact prescribed by, the Labor Department’s “longstanding position” that retirement plans “select investments and investment courses of action based on financial considerations relevant to the risk-adjusted economic value of a particular investment.” It’s also the essence of ESG.

Scalia and the Labor Department appear to confuse ESG with what would more accurately be called socially responsible investing, or SRI, which attempts to align investors’ portfolios with their values by excluding companies and industries that conflict with those values, regardless of financial impact.

It’s no less odd that the Labor Department wants to ban SRI. While I suspect SRI investors will pay a price for mixing their money and their values, there’s little evidence so far that SRI is a drag on portfolios or that it would undermine the “retirement security of American workers,” as Scalia seems to fear. So if 401(k) participants and pension beneficiaries want their money aligned with their conscience, it’s not clear why the Labor Department should stand in the way, particularly when it’s part of an administration that professes devotion to deregulation, small government and religious freedom. But at the very least, the Labor Department should clarify that it’s targeting SRI, not ESG.

If the rule stands, one silver lining is that it might promote a clearer separation between ESG and SRI, which would help investors navigate the growing social investing landscape. Funds that blend the two are a particular source of confusion. The iShares ESG MSCI USA ETF, for example, both invests in stocks with strong ESG scores and excludes tobacco and weapons companies. The Labor Department’s proposed rule would presumably disqualify it from inclusion in retirement plans, and thereby discourage more funds from mixing ESG and SRI.

However the rule shakes out, one thing should be clear: When ESG takes issue with companies such as Facebook, it’s about money, not values. If the Labor Department finds that confusing, imagine how ordinary investors must feel.