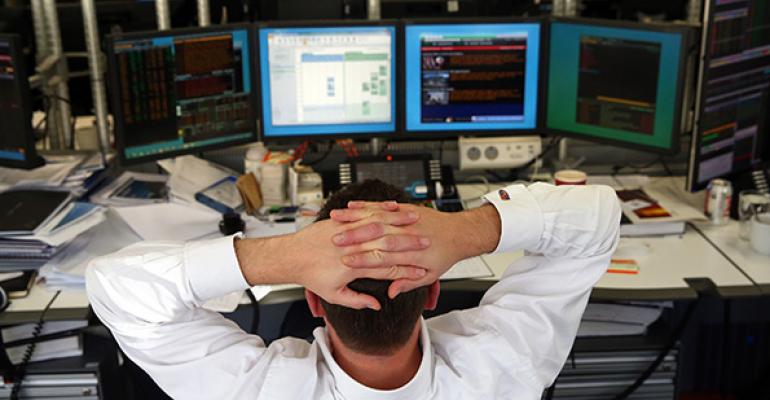 Investors think they've been burned by stock-pickers, though much of the harm is self-inflicted.

By Nir Kaissar and Barry Ritholtz

Barry Ritholtz: I have a foot in both camps, though my shop runs a mostly passive portfolio of low-cost global assets. So perhaps I am not the ideal Boglehead to make the case for passive investing.

However, I do believe a big chunk of your portfolio -- most -- should be passively indexed. Let’s begin our case by pointing out four of the key reasons:

I hope to focus most of my energies on issue No. 4 -- passive as a cure for bad Investor behavior.

Nir Kaissar: I’m not ready to concede that lower cost and better performance are on the side of passive investing.

First, let’s define active and passive. To me, passive investing means buying a broad cross section of the market and weighting the components based on their market capitalizations. Everything else is active.

The most ubiquitous styles of active management -- such as value, quality and momentum -- have historically beaten the broader market. The problem is that active managers kept the profits for themselves by charging investors absurdly high fees.

Those active styles are now available in the form of systematic, low-cost index funds that are just as cheap -- and in some cases cheaper -- than passive funds. The Vanguard Value ETF, for example, tracks a large-cap value index and charges just 0.06 percent annually. That’s less expensive than many Standard & Poor's 500 mutual funds and barely more expensive than the cheapest S&P 500 exchange-traded funds. There are many other examples.

So active isn’t necessarily more expensive than passive. And because cost and performance are so closely related, I suspect that active management will deliver far better results going forward than it has in the past.

BR: We agree on factor investing and that some people beat the market; we also agree that general low-cost, outperforming active management can and does exist -- look at Bill Miller, Warren Buffett or your own track record as proof of that.

But we have to separate the general average manager from the specific individual manager: on average, most of the lower costs and most of the market performance are on the side of passive investing. The average active manager is expensive and typically underperforms their benchmark. The latest studies suggest that it is even worse than we previously believed over longer periods of time.

I think we both agree that expensive AND underperforming active gives the entire complex a bad name.

NK: I certainly agree that most actively managed funds are still too expensive and therefore unlikely to beat passive funds.

Investors have gotten the message. According to Morningstar, they pulled $578 billion from traditional actively managed funds and plowed $1.4 trillion into low-cost funds since 2015 through July.

But here’s the key: Of that $1.4 trillion, $1.2 trillion went to passive funds and only $200 billion went to systematic active -- or smart beta -- funds. The clear message is that investors don’t have much interest in active management at any cost.

Smart beta is doing those things, which is why it’s seeing some inflows even as investors abandon traditional active managers.

BR: Ahh, so there IS some rationality in Investorland! Let’s move to the behavioral concerns, which is my biggest beef with active.

This actually is more about human foibles than it is about active managers, although fund companies certainly know how to market to people’s worst instincts.

The record shows that investors tend to chase fund managers who have had a recent strong run, while jettisoning otherwise decent managers whose preferred style and/or asset class is near the nadir of its cycle. It is one of the most destructive investor behaviors around.

Think about how typical investors learn about any investment manager. It seems to occur after a great run, perhaps with some favorable media coverage as well. But of course, few managers can sustain such outperformance, and yesterday's star money manager is tomorrow's mediocrity. Is it any wonder investors typically underperform their own holdings?

By the way, "active managers have given active management a bad name" is a wonderful sentence. I may have to steal that for a column title.

NK: It’s all yours! And I think it cuts to the core of the debate because there’s nothing wrong with active management per se, even though investors increasingly believe otherwise.

Which is ironic because, as you point out, investors deserve some of the blame for the poor results they’ve gotten from active management. I recently compared fund returns with investor returns for a variety of active and passive funds. I found that investors in passive U.S. stock funds captured on average 96 percent of their funds’ returns over the past 10 years through July, whereas investors in active funds captured just 71 percent. I found the same disparity among foreign stock funds. That’s further evidence that investors tend to chase hot active managers to their detriment.

But here, too, I think smart beta can help. For one, smart beta allows investors to make long-term bets on active styles rather than active managers, the same way that a growing number of investors are betting on passive, capitalization-weighted indexes. Also, smart beta allows investors to compare active managers with active bots, which should help them sidestep managers who are merely peddling high-cost active styles without adding much value.

All of that should give investors more conviction in their choice of active funds and bolster their ability to hang on.

BR: Now we are at the most important part of this debate! I would rewrite your comment as: Investors deserve most of the blame for poor results, due to not having a plan they can or want to stick with, chasing the hot hand, being emotional in their investments, and lastly, their lack of discipline in following their own plans.

Active management has waved shiny objects at investors and they historically came running. Some investors have figured out that they shouldn't behave like magpies -- that's why there's all this flow into passive indexing since the great financial crisis. It's noteworthy that the vast majority of assets are still not managed passively.

My bottom line is most people are better off with low-cost indexing for most of their money. Yes, active does have a role in asset allocation and portfolio construction, but only when it is 1) low cost; 2) additive to portfolio diversification; and 3) not used by investors to encourage their worst instincts and behaviors.

NK: We should acknowledge, however, the information asymmetry between investors and money managers. Many investors, including some institutional ones, need help putting those “shiny objects” in perspective.

But active managers -- and the brokerage supermarkets that peddle their funds -- have not been helpful. They typically wave around little more than the dazzling returns and five-star ratings of their best-performing funds. There’s little warning that performance tends to be cyclical, or that a fund’s active style happened to be in favor, or how fees are likely to impact the chances of future success.

So it’s not surprising that investors have fared poorly and that a growing number are giving up on active management. While it’s true that more money is still managed actively than passively, passive is quickly gaining ground.