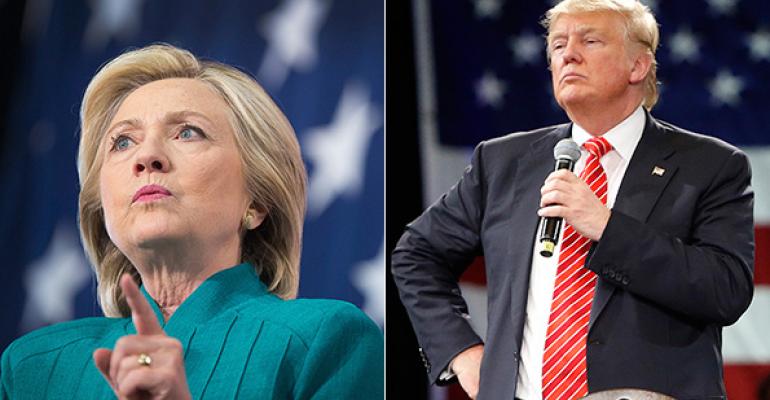 <p>Hillary Clinton tends to tilt conservative when investing her family&rsquo;s wealth while Donald Trump is a bigger risk taker.</p>
Investment

Clinton More Conservative Than Trump When It Comes to Investing

She favors an index fund. He bets on hedge funds.

Clinton, a self-described practical progressive who’s closing in on the Democratic nomination for president, tilts conservative when investing her family’s wealth. The low-cost Vanguard 500 Index Fund, a favorite of Clinton supporter Warren Buffett, has been her top holding. Trump, the presumptive Republican nominee who’s upended his party with stands on immigration and trade, is the bigger risk taker. His single biggest bet has been on the Obsidian hedge fund run by BlackRock Inc.

“Hillary is playing the straight and narrow,” said Daniel Wiener, chief executive officer of Adviser Investments, which oversees $3.4 billion. “Trump believes he is smarter than anyone else, so he is going to make choices.”

The Vanguard fund, which tracks the S&P 500 Index, has been the smarter pick more recently. It has outperformed BlackRock’s hedge fund, which invests in a variety of fixed-income instruments, over one, three and five years. Obsidian wins over 10 years.

Hillary and Bill Clinton, who together made at least $30 million in speaking fees in 2014 and early 2015, had between $5 million and $25 million invested in the Vanguard fund, according to her most recent financial disclosure in May of last year. The $185 billion fund, which charges a 0.05 percent fee, is the only investment listed aside from cash and insurance policies.

Trump’s biggest wager was $25 million to $50 million in BlackRock’s Obsidian Fund, according to his July 2015 filing. The hedge fund, which had about $1.9 billion in assets as of March, charges a 1 percent management fee and 20 percent of profits.

Trump also reported placing $1 million to $5 million in each of three hedge funds run by John Paulson’s Paulson & Co., and investments of $100,000 to $5 million in 11 mutual funds managed by Baron Capital Management.

The Clinton and Trump campaigns, which are required to make fresh financial disclosures by May 15, didn’t respond to messages seeking comment.

The Clintons have added to the flow of money into low-cost index funds as hedge funds come under fire from investors for high fees and lackluster returns. Investors poured a record $148 billion into U.S.-based equity index funds in 2015, according to Morningstar Inc. Hedge funds have had outflows of $16.6 billion in the last two quarters, according to Hedge Fund Research, the worst performance since 2009.

Buffett told shareholders at his annual meeting last month to ditch costly hedge funds since investors can do better “sitting on your rear end” in cheap index funds. He described as “unbelievable” the compensation scheme of hedge funds, which typically charge a 2 percent management fee and 20 percent of profits. He has recommended that the trustee for his wife put most of the money he leaves behind in the Vanguard 500 Index Fund.

The candidates didn’t disclose when they made their investments. But the Vanguard fund returned an annual average of 13 percent over the last five years ended Dec. 31, according to Bloomberg data, compared with 6.3 percent for Obsidian, according to data in a report to investors. The hedge fund gained an annual average of 11 percent over 10 years, topping the 7.3 percent increase of the index fund. All returns are after fees.

The largest of the 11 Baron funds Trump bought is the $6.1 billion Baron Growth Fund, which invests in small U.S. companies with significant growth potential. The fund lost 4.2 percent in the year ended Dec. 31 and gained an annual average of 10.2 percent over five years and 7.3 percent over 10 years -- beating the benchmark Russell 2000 Index in those periods. Investors pay a 1.3 percent fee for the fund.

As Clinton is a longtime political figure, her pick of a “vanilla” investment makes sense to Lawrence Glazer, who helps manage $2 billion at Mayflower Advisors. And Trump’s choice of a hedge fund?

“He’s a guy who is not afraid to express an opinion,” Glazer said.