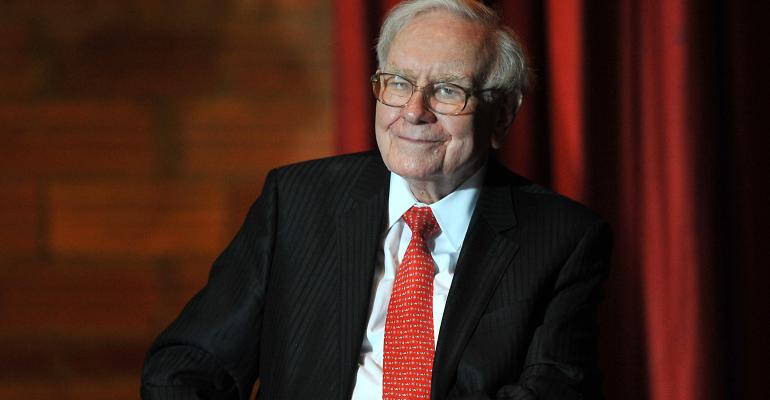 Buffett Bought $12 Billion of Stock From Election Through Friday

A major pickup in activity for Omaha-based Berkshire Hathaway.

(Bloomberg) --Warren Buffett added to his stock portfolio at Berkshire Hathaway Inc. in a big way after Nov. 8.

“We’ve, net, bought $12 billion of common stocks since the election,” he said in an interview with Charlie Rose that aired on Friday. Buffett didn’t identify the securities that he picked.

Purchases of that magnitude represent a major pickup in activity for Omaha, Nebraska-based Berkshire. During the first nine months of last year, the company bought $5.2 billion and sold or redeemed roughly $20 billion worth of stocks, according to a regulatory filing. In 2015, Berkshire bought about $10 billion of equity securities.

Stocks rallied after Donald Trump was elected U.S. president in November, as investors speculated that the Republican’s policies will stimulate the economy. That sentiment cooled some on Monday after the turbulent rollout of an immigration order raised concern that the new administration may follow through with isolationist policies, overshadowing a pro-growth agenda.

Buffett told Rose he was skeptical that the U.S. could increase output at a 4 percent annual clip, as the president has said he’s aiming to achieve.

Rose asked if Buffett’s most-recent purchases included airlines. Buffett ducked the question, saying only that Berkshire held stakes in airlines as of Sept. 30.

In November, Berkshire disclosed that it held in American Airlines Group Inc., Delta Air Lines Inc., and United Continental Holdings Inc. at the end of the third quarter. The billionaire said that month that Berkshire also bought a stake in Southwest Airlines Co. since Sept. 30.

Buffett told Rose he wouldn’t get into why Berkshire bought the shares, but said that it was “in large part” his decision.

The investments have been a curiosity to Buffett’s followers, since the billionaire has been critical of the airline industry for years. In a letter to shareholders in 2008, for instance, he wrote that a “farsighted capitalist” should have shot Orville Wright down at Kitty Hawk to spare investors all the money that would be lost on airlines in the decades after the birth of flight.

On Monday, U.S. airlines tumbled as concerns mounted that Trump’s ban on travel from seven predominantly Muslim nations will lead to more restrictions on flights.

Buffett supported Democrat Hillary Clinton in the presidential race. He has long said he’s confident in the U.S. economy’s long-term prospects no matter who wins an individual election.

Filings detailing Berkshire’s stock holdings at the end of December aren’t due until next month. As of Sept. 30, the company had an equity portfolio valued at $102.5 billion.