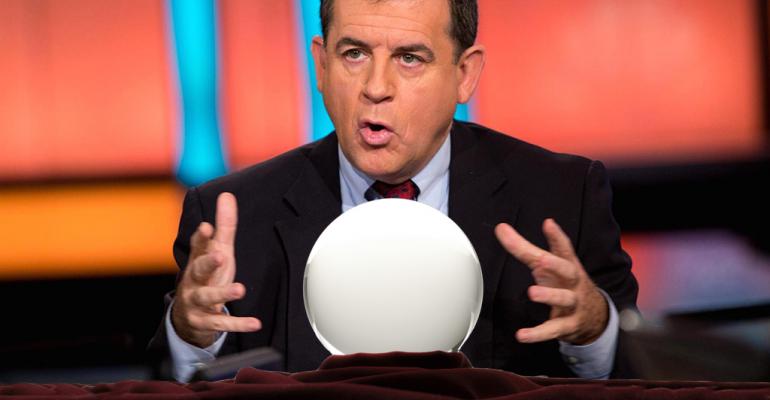 As we go into 2017, investors must decide whether an equity bull market driven by liquidity can continue, and this will require selectivity, said Bob Doll, Nuveen Asset Management’s senior portfolio manager and chief equity strategist. Doll released his 10 predictions for 2017, with a moderately constructive outlook for the U.S. and global economies and for risk assets. But Doll also recognizes that the year brings uncertainty. Doll expects unemployment to drop to its lowest level in 17 years, Treasury yields to move higher and active manager performance to improve. Stocks, which Doll predicts will outdo bonds, will hit their highs in the first half of the year, with small caps, cyclical sectors and value styles having the edge. He also anticipates initial optimism around the Trump administration to fade. “While we believe fundamental change is on the way, it may not be as easy as it appears,” Doll said.

Should Your Clients Pause 401(k) Contributions? High-income clients who max out their 401(k) contributions should consider suspending them in early 2017, writes Ashlea Ebeling for Forbes. Many higher-income investors comfortably reach their contribution limits halfway through the year, or sooner. If tax cuts are coming from a President-elect Donald Trump and a Republican-controlled Congress, then funneling a portion of normal 401(k) pretax contributions into a taxable brokerage account or a Roth 401(k) could prove to be beneficial in the long run. Investors would be taking the tax hit in a year when rates are low, as opposed to during retirement. With that being said, clients do need to consider the totality of their financial situations, including local and state tax laws, how long they are willing to wait for Congress to act—which could be a while—as well as the rules of 401(k) matching programs. Preparing to comply with the Department of Labor's fiduciary rule is the top resolution of financial advisors for 2017, according to a survey of over 900 members of the SEI Advisor Network. "This year, the addition of the DOL rule to the list is no surprise,” said John Anderson, head of practice management for the network. “With the major events this past year, such as increasing market volatility, the passing of the DOL fiduciary rule and the presidential election, advisors are resolving to create better, more compliant businesses." The second most popular New Year's resolution? Building a referral network, followed by a resolution to increase client awareness of a broader range of services offered, implement better technology workflows and adopt a goals-based investment approach for clients. Read the rest of the list here.