/sites/all/themes/penton_subtheme_wealthmanagement/images/logos/footer.png
Recent
Recent
Eight Must Reads for the CRE Industry Today (May 19, 2022)
May 18, 2022
Russian Billions Hidden in US Spur Backlash to Financial Secrecy
May 18, 2022
Mariner Wealth Advisors Expands in Michigan With Emerson Wealth Acquisition
May 18, 2022
Macquarie Alum’s GreenPoint Eyes $1 Billion for Real Estate Bets
May 18, 2022
Featured
The 10 Best and 10 Worst States in Which to Retire in 2021
Jul 15, 2021
Poll: 15 Classic Books on Investing and the Markets
Apr 03, 2020
Fifteen Must-Listen Business Podcasts for Advisors
Aug 14, 2020
Celebrity Estates: Jay Leno and Planning for Classic Car Collections
Feb 22, 2022
Informa Intelligence
brought to you by 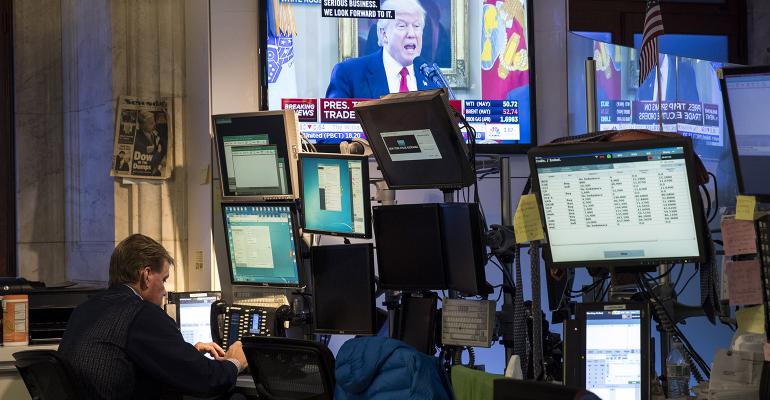 Biderman on Markets: What Supply and Demand Data Tells Us About Today’s Stock Market

Are economic observers falling into the same trap that pollsters and pundits did pre-election, and underestimating the Trump administration’s appeal, assuming he stays in office?

When votes were counted in November, it was clear many political experts, pollsters and Democratic Party operatives had badly underestimated Donald Trump’s appeal to voters outside the coastal belts. That may be a lesson which plenty of economists, analysts and financial journalists still need to learn.

Why do I say that?

Recent analysis by TrimTabs shows that economic growth has been picking up recently. Our estimate of U.S. job growth for the past two months, based upon publicly available tax withholding data, shows the fastest job growth since April 2015.

Now I have great faith in our research, after all I founded the company almost three decades ago, but I was taken by surprise. The first few months of the Trump administration remind me of the Gang That Couldn’t Shoot Straight — to steal the late great Jimmy Breslin’s book title on NYC mobsters — and my estimation of their ability to enact their reflationary agenda has been subject to constant, downward, revisions.

On a recent flight to Hawaii from the mainland I sat next to a former Mountain State GOP party leader, still active in politics. In the face of my concern and doubt that President Trump will be able to get anything significant done in terms of new legislation on tax reform, infrastructure growth or a more effective health care program, she remains a believer in the new administration. She convinced me she still absolutely supports Trump and believes that he will get everything important enacted, regardless of my doubts. Looking at the improving economic data, it appears many other middle American business types are also true believers.

Earlier this year, I had been saying that the boomlet in stock prices would not last when America realizes that the Trump administration just can’t get things done. However, given this almost religious belief that middle American business types hold about Trump, the wake-up call that puts their hiring and capex plans on ice could still be months away.

Meanwhile, actual supply and demand data is sending mixed signals for stocks now. Individual investors have stopped pumping big bucks into U.S. stocks in May after a record $160+ billion inflow into U.S. equity exchange-traded funds (ETFs) since the election. Indeed, both U.S. equity ETFs and U.S. equity mutual funds both saw significant outflows since the start of May. According to our historic measures, U.S. Equity ETF outflows have been bullish for near term stock prices more often than not. See the outflows? At the same time, companies themselves had been committing less cash to reduce the supply of shares and corporate insiders up until May 2. So far in May there has been a pick-up in new stock buybacks — primarily due to two huge deals announced May 2 by Apple and Goldman Sachs. On the other hand, insiders since the start of this year have been selling shares, net of insider buying, at the fastest pace in six years.

I ask again, what’s going on?

Market players have obviously benefited from a stock market that has surged dramatically since the 2009 market bottom. Market capitalization of the U.S. stock market stands at $29 trillion today, more than two and a half times the $11 trillion at the end of 2011.

So why did stock prices soar over the past six years? One reason is U.S. companies have been massive net buyers of their own shares. Corporate buying through cash takeovers of already public companies as well as stock buybacks outpaced new equity issuance by more than $3 trillion since the start of 2011.

With borrowing costs at rock bottom, many companies decided that reducing their share count with cash flow or even borrowed money made more sense than investing in their businesses by hiring people or investing in plant and equipment. All else being equal, stock prices go up when the supply of shares goes down. Another reason stock prices surged is of course that the Federal Reserve and many other central banks created the equivalent of trillions of dollars out of thin air to buy financial assets, mostly government bonds. Those who sold trillions of dollars, yen, euros, and pounds in bonds to central banks reinvested the newly created money into other things, including equities.

While it is impossible to know how many trillions went into equities because of central bank actions, guess what happens when more money chases fewer shares? Stock prices go up.

One more thing, take a quick look at this EPFR chart showing European inflow, versus U.S. outflow over the recent past. As I mentioned to Rick Santelli on Tuesday, huge inflows into Europe: If economic conditions continue to improve and the new orthodoxy holds, it is likely to put a floor under stock prices. However, if and when the Trump constituency loses faith, U.S. stock prices may plunge dramatically.

The stock market will not be boring going forward from here! You have been warned…