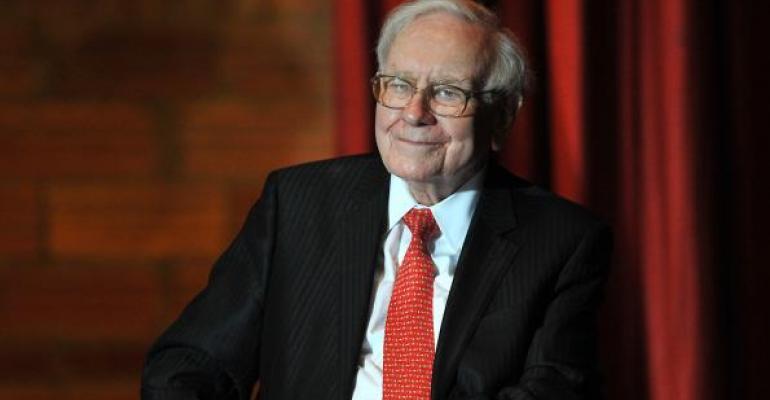 (Bloomberg) -- Warren Buffett’s Berkshire Hathaway Inc. disclosed a stake in Apple Inc., betting that the technology company will rebound after a slump driven by a slowdown in iPhone sales.

Berkshire held 9.81 million Apple shares as of March 31, according to a regulatory filing Monday from the billionaire’s Omaha, Nebraska-based company. The holding was valued at $1.07 billion at the end of the first quarter.

Apple last month reported its first quarterly drop in revenue in 13 years, stoking concerns that the company’s best days have passed. The company’s share slide since the middle of last year may have created an opportunity for Berkshire, even though Buffett typically avoids investments in technology companies.

“Apple at the current valuation makes a ton of sense; it’s a consumer-product company more than a tech company,” Jeff Matthews, an author of Berkshire-related books, said about the new holding. “The company has a great financial model, a great brand name and a cheap stock.”

David Tepper’s Appaloosa Management disclosed Friday that it sold out of its Apple stake in the first quarter. Billionaire Carl Icahn said last month that he exited a position in the company because of concern about its relationship with China. Kristin Huguet, a spokeswoman for Apple, wasn’t immediately available to comment.

Chief Executive Officer Tim Cook is pivoting toward services and exploring new technologies such as self-driving cars to reduce reliance on the iPhone. Cyrus Mewawalla, managing director at London-based CM Research, said those initiatives are unlikely to pay off this year, but may reward more patient investors.

“What would make this stock a good buy is a whole load of projects we know they’re working on,” he said. “They’re working on a TV, a car, a whole bunch of apps coming for the Apple Watch. We know mobile payments has just started off.”

The investment could have been made by one of Buffett’s deputies, Todd Combs or Ted Weschler. Both have been building their own portfolios in recent years and typically take stakes of $1 billion or less per company, while Buffett makes larger wagers. The filing doesn’t specify the person behind each holding, and Berkshire didn’t immediately respond to a message seeking comment.

Berkshire has waded more into technology investments in recent years. Combs previously invested in Intel Corp. And Buffett is backing billionaire Dan Gilbert’s bid for Yahoo! Inc.’s core assets. The Berkshire chairman told CNBC that he could provide financing, if there were adequate protections, but doesn’t have enough understanding of the Yahoo assets to take an equity stake.

In 2011, Buffett amassed a multi-billion dollar holding in International Business Machines Corp. He increased that stake slightly in the first quarter.

Berkshire also added to its holdings of Visa Inc., Deere & Co. and Bank of New York Mellon Corp., according to Monday’s filing. Buffett’s company exited a stake in AT&T Inc. and reduced its investment in Wal-Mart Stores Inc.

Berkshire’s largest equity positions, in Kraft Heinz Co. and Wells Fargo & Co., are each worth more than $20 billion.