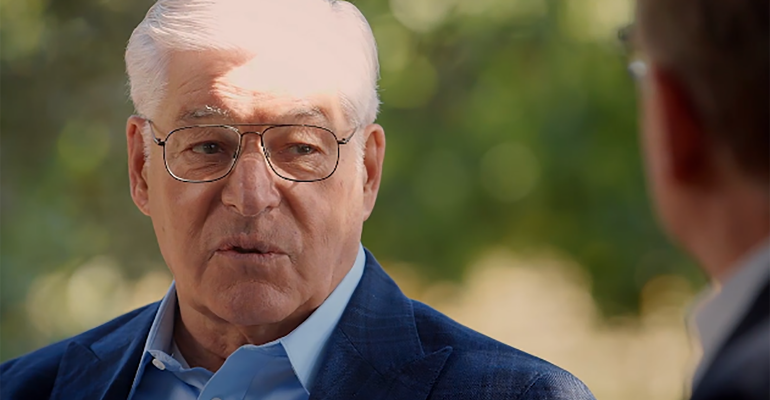 Exactly 50 years ago on July 1, Mac McQuown and his team of academics created the first-ever index fund -- an innovation that would take a sledgehammer to the money-management establishment and evolve into a more than $11 trillion industry.

(Bloomberg) -- The unsung hero of modern investing spends his days on the sunny vineyards of Sonoma, California -- a world away from Wall Street.

But exactly 50 years ago to this day, McQuown and his team of legendary academics created the first-ever index fund -- an innovation that would take a sledgehammer to the money-management establishment and evolve into a more than $11 trillion industry.

“It goes without saying that I’m an anarchist,” McQuown, 86, said in an interview.

With his disruptive zeal, the team at Wells Fargo & Co. sought to shake up the investing orthodoxy. The charge: Money managers left to their own devices are typically undiversified, expensive and unfit for purpose.

“In the 50 years since then, we’ve demonstrated that’s right,” said McQuown.

He’s quick to share credit for the first fund with others.

The president of Wells Fargo, Ransom Cook, hired him and the bank lavished millions on the endeavor. Meanwhile the theories that underpinned index investing were laid out by academics like Harry Markowitz, William Sharpe and Eugene Fama, many of whom collaborated on the project.

“We had a dozen academics working with us,” McQuown said. “Six of them have Nobel prizes now.”

Yet it was McQuown who had the gumption to harness their groundbreaking ideas in the real world with his financial-engineering acumen.

Wells Fargo used about $6 million from the Samsonite pension pot to create an equal-weight gauge tracking all the shares on the New York Stock Exchange, which back then numbered around 1,500.

It was not a big success, in fact. The complexity and cost of constantly re-weighting the fund’s constituents was a huge drag, and in 1976 the Samsonite product was rolled into another fund that held members of the S&P 500 Index in proportion to their market values.

But the low-key ending to the first-ever fund belied what it set off: Wells Fargo continued to grow its index business as clients staged a revolt against active money managers failing to beat benchmarks.

The unit would go from strength to strength and become Barclays Global Investors, which launched iShares and was bought by BlackRock Inc. -- making it a pillar of the largest money manager in the world.

Meanwhile, Bogle brought indexing to the masses, launching the first fund accessible to retail investors in 1976 at his then-fledgling investment company Vanguard.

It is hard to overstate the legacy of the July, 1971 milestone. It’s largely thanks to index funds -- which demystified the investing process and lowered costs for returns -- that more than half of all Americans are invested in the stock market today.

McQuown recognized that potential 50 years ago, according to David Booth, co-founder of the pioneering quant asset manager Dimensional Fund Advisors and a member of the legendary Wells Fargo team. Maybe not the scale -- their early estimates were they could attract about $10 billion, Booth said -- but certainly the capacity to improve the way humanity invests.

It was McQuown who helped deploy the brightest minds in academic finance in a bid to change the investing game, including Fischer Black, Mike Jensen, Jim Lorie and Myron Scholes.

“The people who did the research were the catalyst,” Booth said. “But they needed somebody to stand up and say, ‘Okay, enough of the theory. We need to get this supplied. This is important. We can make lives better.’”

The revolution they all kicked off isn’t without detractors. Critics fear passive ownership is rocking price discovery, volatility markets, corporate governance and more. But today, the oenophile in Sonoma is more worried about “subjective” investors.

Technology made the benchmarking boom possible, he says. But it’s also increased the power of market players prone to bias and unpredictability.

Not that you’ll catch McQuown criticizing the Reddit army wielding day-trading apps, who whipsawed the stock market this year.

McQuown, who has a mechanical-engineering background, remains an innovator at heart. He’s currently coordinating a second micro grid to help power his estate, which lies between two mountain ranges north of San Francisco.

His love affair with wine making is as old as index investing itself -- he made his first investment while at Wells Fargo, and even took a month off from the bank to learn about wine in France.

Back then, McQuown and the finance academics he worked with never contemplated making history. He says their work was just about solving problems as they come.

“I was having an incredibly good time,” McQuown said. “The stars don’t get lined up that way very often.”