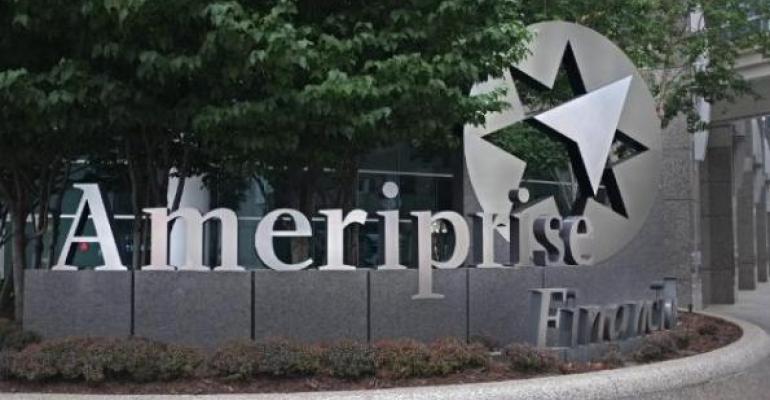 Ameriprise Advisor Count Down, Productivity Up

Ameriprise Financial lost a net 12 advisors in the first quarter, as strong gains to its franchise channel were slightly more than offset by losses in its employee channel; meanwhile, advisor productivity increased to $454,000 per advisor, up 3 percent from last quarter and 15 percent from a year ago.

“When you get markets that are this strong, it does create complacency. But we’re still able to attract the type of advisors that we want, which will drive profitable growth,” said Walter Berman, chief financial officer, during a conference call Tuesday morning.

While the firm’s employee channel lost 50 advisors, recruiting to its independent channel offset that, bringing total advisor count to 9,704. That compares to 9,716 last quarter and 9,777 during the year-ago quarter. The firm brought on 76 experienced advisors during the quarter.

Total client assets in the segment were up 12 percent from a year ago to $418 billion, due to client net inflows, client acquisition and market appreciation. Wrap net inflows increased 3 percent to a record $4.2 billion, bringing total mutual fund wrap assets to $159 billion.

The segment’s first quarter margin also rose to a record 15.8 percent, compared to 12.8 percent a year ago and 14.2 percent last quarter. Berman said he believes the unit can sustain a 15.3 percent to 15.8 percent margin for 2014.