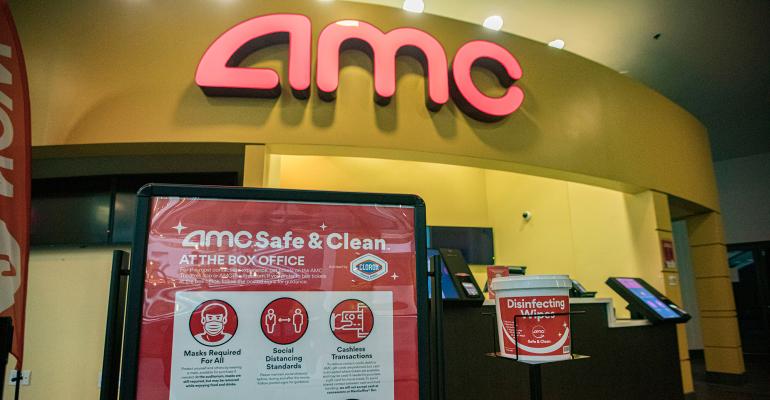 Rallies in AMC and GameStop’s stocks have captured the public’s attention, but credit markets have been moved, too.

(Bloomberg)—It’s looking more and more like corporate-finance textbooks need a chapter on memes.

Being on the brink of bankruptcy no longer seems to matter much in the U.S. stock market. While that might sound like the beginning of a cautionary tale about the state of investing in 2021, the reality is far stranger. Redditors have bid up shares of AMC Entertainment Holdings Inc. and GameStop Corp. so much that it’s saved them -- for now, at least -- from deep trouble.

They’re not the only troubled companies where social-media users are trying to conjure magic. In a broad benchmark of U.S. stocks known as the Russell 3000 Index, there are 726 companies whose earnings don’t cover their interest payments, a red flag to pros, according to data compiled by Bloomberg. These zombies are up an average of 30% in 2021 -- trouncing the 13% return for the whole index -- and 41 of them have doubled since New Year’s Eve.

Rise of the Zombies

Even explicitly dire warnings don’t seem to register. A bankruptcy plan under consideration by GTT Communications Inc. would wipe out shareholders, which is typical in Chapter 11 cases, Bloomberg reported May 24. Nevertheless, the company’s stock is up about 69% since then.

Wall Street is starting to factor in the impact of traders drumming up enthusiasm for stocks on social media and Reddit threads. Theater operator AMC, which was on the brink of bankruptcy last year, now has a “path to a sustainable capital structure,” according to S&P Global Ratings, in part because it’s been able to sell new shares amid huge demand from retail investors. Video-game retailer GameStop is now debt-free for the same reason.

“When looking at the debt of certain issuers, it’s becoming difficult not to take into account equity valuations that may seem inflated by Reddit-driven trading, especially as companies such as AMC are able to monetize these valuations,” said Ben Briggs, a credit analyst at StoneX Financial Inc.

In bankruptcy, shareholders are the last to recover value, only after all debt holders are paid. Still, investors are piling into shares of troubled names -- and even companies already in bankruptcy proceedings. Medley Management Inc. has soared this month. The firm’s private-debt business filed for Chapter 11 protection in March with plans to repay its debt with new stock.

The Reddit optimists can point to more than just AMC and GameStop. Rental-car company Hertz Global Holdings Inc.’s survival was in question a year ago. It tried to sell shares to prop itself up, but admitted they could be worthless, prompting the Securities and Exchange Commission to block the offering. But its Chapter 11 restructuring ended up returning value to shareholders, which almost never happens.

Rallies in AMC and GameStop’s stocks have captured the public’s attention, but credit markets have been moved, too. GameStop no longer has debt, but AMC’s bonds have recovered dramatically. Its 12% note due in 2026 was deeply distressed in November at 5 cents on the dollar. An incredible turnaround has put them just above par now.

It’s no coincidence that some of the most troubled companies are now the ones benefiting the most from retail-driven rallies. Their massive debt loads, coupled with the devastating impact that Covid-19 had on their ability to generate revenue, were among the reasons their stocks are so heavily shorted in the first place. Redditors have specifically targeted stocks with huge bets against them.

“The Reddit rallies are slightly changing the way we approach investments,” said George Schultze, chief executive officer of Schultze Asset Management. “The dynamic of these rallies is certainly interesting and is clearly a sign of excess liquidity sloshing around in the market.”

GTT, an internet infrastructure company, spiked to an intraday high of $4.75 on June 3 after sinking toward $1. The company caught the eye of Reddit traders, who pointed to its small market capitalization, high short interest and the CEO’s previous business turnarounds.

The company has repeatedly extended its forbearance agreement with lenders, something that’s been interpreted in online forums as a lifeline -- not a routine part of restructuring negotiations, which it is.

Washington Prime Group Inc., the owner of shopping malls reeling from the pandemic, has also attracted retail traders. Like GTT, it has a forbearance pact with lenders and appears headed for bankruptcy court.

“A lot of retail investors are very smart,” said Christian Lawrence, a strategist at Rabobank in New York. “They aren’t given enough credit. But without a doubt many don’t understand the exact mechanics surrounding bankruptcy.”

How this all ends is anyone’s guess. But even as pros start factoring in the meme-stock craze, it’s clear the gap between old-style finance and the new ways is wide.

--With assistance from Matt Turner.