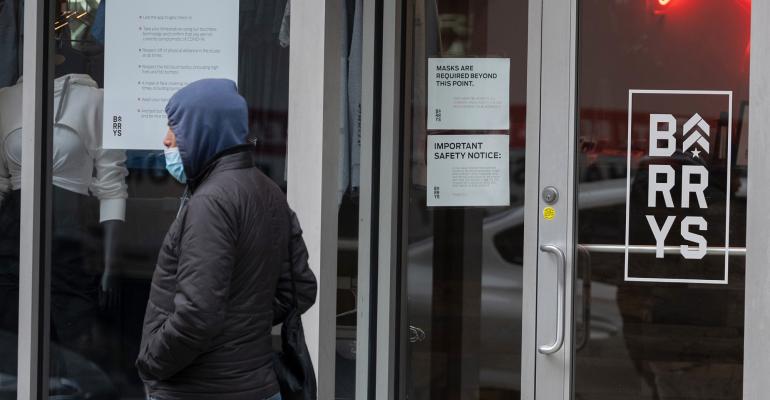 For boutique fitness studios, the fight for survival is not over among fast-changing and confusing rules.

(Bloomberg)—New York is loosening some Covid-19 restrictions this week, signaling a step toward normalcy for a wide range of businesses. But for fitness studios such as Y7 Studio, Barry’s Bootcamp and Mile High Run Club that managed to endure a year of devastated sales, the fight for survival is hardly over.

They must navigate fast-changing and confusing rules. New York has said fitness centers can operate at 50% capacity as of May 15th, but also says that, as of Wednesday, it is not basing capacity limits for businesses on a percentage of maximum occupancy, but rather on how many people can fit in a space while staying six feet apart. For small-format workout facilities, that might not be much of a reprieve.

Meanwhile, these operators face delicate decisions about what masking rules to enforce at their businesses now that state mandates have eased. Many are finding it difficult to rehire and retrain instructors to adequately staff a full schedule. And none of them know how eager customers will be to return, given lingering virus fears and the possibility that last year’s at-home exercise routines turn out to have staying power.

All of that makes for a moment of tempered optimism for New York fitness companies – a welcome chance to ramp up their recovery efforts even as the backdrop for their businesses remains challenging.

Sarah Levey, owner of hot yoga-focused Y7 Studio, is making preparations to restart classes at about half of the 15 New York studios she operated before the pandemic. The rest have permanently closed.

Levey hadn’t opened her doors previously because she said her business model doesn’t work at 33% capacity, the maximum allowed under local rules at an earlier phase of the pandemic. Now, she is struggling to get back the staff and instructors she had to lay off last year, while the rent payments and operational costs that piled up during months of closures continue to hang over the business.

Barry’s Bootcamp, by contrast, has been offering classes at its New York facilities at 33% capacity, which translates to about 20 people in a class that formerly hosted 58. “For us, that is sufficient enough to warrant being open,” said Devin Murphy, senior vice president of operations at Barry’s.

But studios are adjusting to a new rhythm: Classes in the 10 a.m. and lunch hours that used to be off-peak are now considered peak, given participants’ more flexible work schedules.

As Barry’s aims to recover, Murphy says one of its challenges will be the way the wider gym industry was viewed during the public-health crisis. “Fitness got a really bad rap,” Murphy said, given that “high exertion” and “heavy breathing” are “buzzwords that have negative connotations throughout the pandemic.”

A resurgence will depend on customers like Shane Hantman, 27, who recently returned to class at Barry’s Upper East Side location after he fell out of an outdoor and at-home exercise regimen. “I was actually really nervous about coming back. I’m still a little bit apprehensive about being so close to other people,” he said.

But he finds being in the studio has advantages over working out at home. “When you go into group fitness, there’s other people there, you’ve signed up, you’ve paid money,” Hantman said. At home, “if you start to not feel it, you can just turn it off and return to chips and salsa.”

The pandemic has been punishing for the fitness industry. Some chains, including YogaWorks, Cyc and Flywheel filed for bankruptcy; others closed their doors quietly, without seeking a public filing. As of December, about 19% of boutique fitness studios had permanently closed since the onset of the pandemic, according to the International Health, Racquet and Sportsclub Association.

Even for the survivors, it’s been a bleak time. Mile High Run Club, which offers treadmill workouts, saw an average of 1,200 visitors a week before the pandemic. Now, attendance is down 65% from that level, according to Chief Executive Officer William Heath. That makes it tough to shoulder rent, insurance, and costs to lease equipment, including at some locations that remain shuttered.

“We can’t just remain closed until there are no Covid restrictions,” Heath said. “The sooner we get up and out there, the sooner we get our numbers back to a cash-flow-positive place.”

On a recent Tuesday morning, about a dozen runners at Mile High’s Noho location stood in the studio’s lobby waiting for class to start. There was an anxious feeling in the room: Attendees didn’t talk and they made only brief eye contact.

They entered the classroom and stepped onto assigned treadmills that kept them six feet apart, a setup that cut capacity in half. During the 45-minute class, they pulled down masks to take hurried sips of water during rests as the instructor, Corinne Fitzgerald, corrected their postures and strides. No high-fives were exchanged at the end of class.

“It’s going to take several months for people to dip their toe in the water,” Heath said. “Maybe they come back once a week and then, as they become more comfortable, that becomes twice a week.”

That’s the hope, at least. But it is hardly a sure thing. A comeback for boutique fitness centers hinges in large part on how enthusiastic customers are about returning. Many people might stick with at-home workouts even as life returns to some sense of normal, particularly if they realize doing so saves them money or transit time. Those who dropped $2,500 for a Peloton bike or $1,500 for Mirror, a competitor home-workout product, may opt to continue with those programs to get their money’s worth.  A survey from TD Ameritrade found that 59% of Americans don’t plan to go back to their gym after the pandemic.

Like businesses ranging from restaurants to construction, boutique workout studios say they are also struggling to find workers. Mile High is down to seven running coaches from 21 a year ago. Four moved to Colorado for an escape from the pandemic and don’t look to be returning. The staffing trouble is making it hard to get all of its locations open.

Strengthen-Lengthen-Tone, a studio also known as SLT, is another that has found it challenging to bring back its teachers. Founder Amanda Freeman said some who shifted to online instruction during the pandemic are not eager to come back.

There could be federal assistance on the way. Last week the Gyms Act was introduced in the U.S. Senate and is supported by over 100 representatives in Congress. If passed, the bill would provide a $30 billion fund for health and fitness-related businesses that faced losses during the pandemic. The program would allow owners to apply for Small Business Administration grants and use the funds for payroll, rent, mortgage, utilities, insurance, and other expenses.

In the meantime, owners and operators may be forced to get creative to lure customers back. SLT, for example, is planning to designate some classes on its schedule for vaccinated members only. Class attendance on a typical day is around 50% to 70% of pre-pandemic levels. That’s not nearly enough to recoup the losses suffered during the pandemic; it’s hardly enough to break even, according to Freeman.

While the loosening of restrictions in New York is a milestone, Freeman says there is a general feeling of disappointment among owners. “We waited a year, and this is it?”