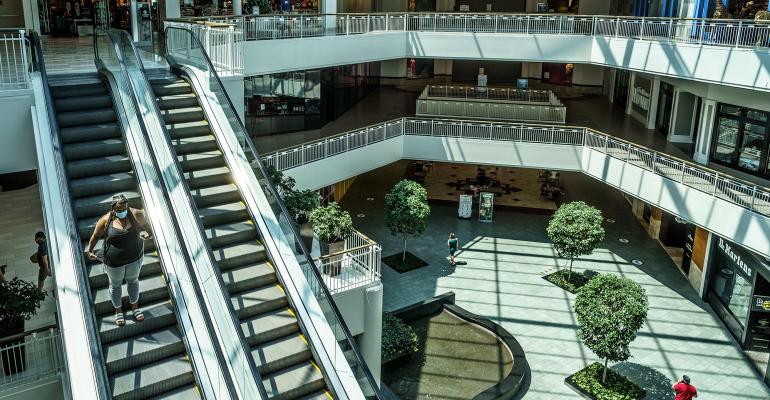 Rescuing struggling malls will be unusually complicated because of byzantine webs of financing.

(Bloomberg)—The two U.S. mall owners that filed for bankruptcy on Sunday could be just the beginning.

As retailers ranging from J.C. Penney Co. to Brooks Brothers Group Inc. go bust, their landlords are struggling, too. But rescuing malls will be unusually complicated because the properties have byzantine webs of financing that have only grown more elaborate with time. Interest groups ranging from lenders to shareholders to tenants to holders of complex mortgage bonds are wrangling over how to fix the situations, and for many large property owners, bankruptcy will be the only option, restructuring professionals said.

A shopper rides the escalator at the Shops & Restaurants at Hudson Yards mall in New York, U.S., Wednesday, Sept. 9, 2020. New York City malls have the green light to reopen Wednesday under the condition that they have enhanced air filtration systems in place.

That’s what CBL & Associates Properties Inc., which controls more than 100 retail properties including malls and shopping centers, found. The real estate investment trust spent months trying to restructure out of court before entering bankruptcy in November. Pennsylvania Real Estate Investment Trust, the owner of about 30 retail properties in mid-Atlantic states, also filed for bankruptcy this week. Both aim to continue operating in bankruptcy.

There’s more pain to go around. As of October, 14% of U.S. malls were delinquent on their mortgages, almost double the high after the financial crisis, according to an analysis of mortgage bonds by research firm Trepp.

Some of CBL’s peers, like Taubman Centers Inc. and Washington Prime Group Inc., have already been scrambling to get lenders to ease terms of their credit agreements. They’ve asked debt investors to relax requirements like the minimum amount of earnings they need relative to their borrowings, according to regulatory filings.

Malls are financed with a dizzying array of bonds, loans and equity, including debt obtained through the commercial mortgage backed securities market. Many of the properties are at least partly owned by one or more of the department stores that anchor them. The varieties of debt that malls have taken on have only grown more complex over the last decade.

Jeffrey O’Neale, a partner in the real estate practice of law firm Mayer Brown in Chicago, likened the drama for most malls to a family.

“It was easier to make decisions in my household when it was just me,” O’Neale said. “When I’m with my wife, and my brother and sister-in-law are in town, it’s another story,” he said. “It’s the commingling of a lot of interested parties that makes things so much more complex.”

Some malls are just trying to reduce their debt levels, or ease restrictions on their borrowing, when they may need to make more drastic changes that can happen only in bankruptcy, O’Neale said.

“Traffic is down and revenues are down. Some of these malls are not gonna make it under the current business model,” he said. “No amount of restructuring can change that.”

Properties with weaker sales or more out-of-the way locations, often known as class B or C malls, could be at higher risk. There are more than 350 malls in the U.S. that are categorized as B malls, according to real estate research firm Green Street, and more than 325 that are class C.

CBL hired advisers in January to help figure out how to reduce its liabilities, and in June it skipped an interest payment. Bloomberg reported in July that the company was planning to file for bankruptcy.

In more normal times, companies owning just a handful of malls that are performing poorly can often just turn over the properties to lenders. Individual malls in CMBS usually are financed on a non-recourse basis, meaning creditors can’t ask the parent company to make good on the loans.

This may not work for mall owners now because the pandemic’s pain is so widespread across the country. Malls aren’t just suffering in Houston or Los Angeles, they’re struggling to attract customers just about everywhere -- and that’s on top of shopper defections to online merchants that were already happening. It’s the kind of pressure that can put an entire company in jeopardy.

Among retail properties with delinquent mortgages, the appraised value of the space had fallen by an average of 34% from when the loan was made, according to an analysis of commercial mortgage bond data through October from Wells Fargo & Co.

For example, the Park Plaza, a CBL mall in Little Rock, Arkansas, was valued at $33.1 million in August, down more than 75% from its 2011 appraisal of $142 million. CBL defaulted on the debt and “intends to turn the collateral back to the lender,” according to a Sept. 17 note by ratings analysts at DBRS Morningstar. One factor potentially complicating the mall’s options: Dillard’s Inc., the department store anchor, owns about half of the property’s retail space. Dillard’s declined to comment.

With those big drops in values, owners would take a huge hit if they sell assets. The declines also complicate efforts to underwrite new financing or amend debt terms, said Rhona Kisch, who heads the real estate practice group at law firm Seward & Kissel. Kisch co-heads a task force the law firm set up on commercial lease and loan restructuring in response to the pandemic.

“It’s hard to restructure in an environment where you don’t know the value of your assets,” Kisch said. “We’re in a moment of absolute transition and we don’t know necessarily where things are going.”

That doesn’t mean negotiating with lenders and restructuring debt out of court is impossible. Parties have an incentive to avoid the expense of the bankruptcy process. Washington Prime told investors in August that it had enough flexibility to avoid violating the terms of its credit lines and bonds.

Even with the right incentives for all parties, the balance sheets of mall owners have become more complicated as owners have used a growing amount direct loans and unsecured debt over the past decade. Where CMBS once constituted the majority of retail commercial real estate debt financing, now the securities account for just about half of the borrowings.

Direct lenders often make loans for three years with an opportunity to extend at the end, while CMBS usually mature in closer to 10 years. That difference positions lenders to make faster and more aggressive repayment demands on borrowers.

“Commercial real estate problems are looming very closely on the horizon,” said John Sparacino, a bankruptcy lawyer at McKool Smith. “I really don’t think I’d want to be a property owner right now -- and I sure wouldn’t want to be a lender.”

--With assistance from Charles Williams, Claire Boston and Christine Maurus.