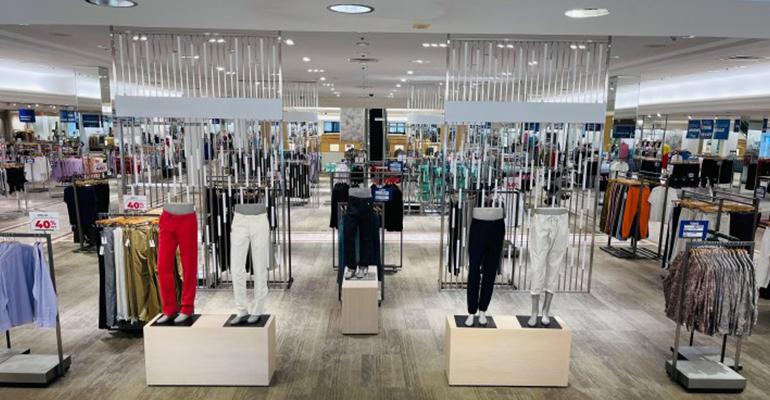 Hilco Global and Gordon Brothers are now running sales of last season’s extra goods under their own nameplate.

(Bloomberg)—Hilco Global and Gordon Brothers Group typically come on the scene when it’s time to run going-out-of-business sales and shutter stores. In a sign of just how much the pandemic has turned the retail business on its head, they’ve started opening them.

The Covid-19 crisis, which prompted a wave of retail bankruptcies and nationwide shutdowns, swallowed a whole season’s worth of unsold goods. That has opened the door for Hilco and Gordon to run sales -- not for the retailers that usually hire them but under their own nameplate. Shopper’s Find, as the stores are called, are sourcing directly from manufacturers or wholesalers stuck with piles of last season’s fashion and other extra goods.

“As more and more stores are closing, there are fewer outlets for inventory,” said Ian Fredericks, the head of Hilco Global’s retail group.

When Hilco and Gordon Brothers run their mainstay liquidations, they step in to manage and oversee stores’s operations. That involves not just tasks like displaying merchandise and running the cash register, but adding inventory from vendors to round out what’s available -- bringing in socks, for example, if you are selling shoes, Fredericks said in an interview.

Those contacts have proved useful for both sides now that manufacturers need to offload mountains of stuff and the liquidators have found no shortage of cheap rents for spaces to run a new type of cut-rate sale.

“We have unique access to merchandise, and deep relationships with vendors,” Rick Edwards, who heads Gordon Brothers’s retail business, said in an interview.

The companies are probably best known for their liquidation businesses, though they also do appraisals, lending and consulting. They’ve also teamed up to purchase bankrupt brands like Sharper Image and Linens ‘n Things.

Their pivot into the new business comes as the retail industry regroups after the pandemic accelerated a monumental shakeout. More than 20 well-known retailers went bankrupt last year, including Neiman Marcus Group, J.C. Penney Co. and Brooks Brothers. Some, like Lord & Taylor, didn’t survive. Retail sales are generally more profitable than wholesaling, too.

Fredericks describes their two new locations as carrying a department-store breadth of merchandise, including furniture, but with discounts of up to 60%.

On a recent Friday afternoon, the Shopper’s Find in Wayne, New Jersey had the layout and fixtures of its former tenant, which confused one shopper, who said she still saw good prices and brands. Neat rows of merchandise included Vineyard Vines women’s bathing suits half off at $35 and Karl Lagerfeld dresses marked down 40% to $81.

“I would probably browse through here,” said Tara Nelson, 34, an educator from Westfield, New Jersey who came in to look for a shirt for her husband. “It’s not as chaotic as Century 21,” the retailer with a similar model that shut down in bankruptcy last year but says it plans to reopen.

The New Jersey store was all but empty that day, during its soft opening, in contrast to the packed Willowbrook mall outside. A couple of signs by the entrances informed customers that Shopper’s Find was open for business.

Shopper’s Find isn’t the first time Hilco has tried to set up its own shops. In 2014, it bought a 35-store off-price chain owned by now-defunct Stage Stores Inc., but abandoned the effort in part because the logistics and technology expense proved prohibitive, Fredericks said. Costs in those areas have since come down, and Hilco has beefed up its own IT, developing an app that can track individual store operations in real time.

The latest effort looks timely, according to Simeon Siegel, managing director at BMO Capital Markets. Off-price -- selling department-store-type goods at a discount -- is one of the strongest performing areas of retail, and merchants can take advantage of good lease terms.

And while there’s excess merchandise on one side, supply-chain bottlenecks are bedeviling the traditional national merchants trying to source new stock. Anyone who does have goods, even from previous seasons at a discount, will find receptive customers buoyed by stimulus money and pent-up demand.

“The Venn diagram feels like a consultant’s dream,” Siegel said in an interview. “This is a trifecta of massive capacity, huge desire, but lack of product.”