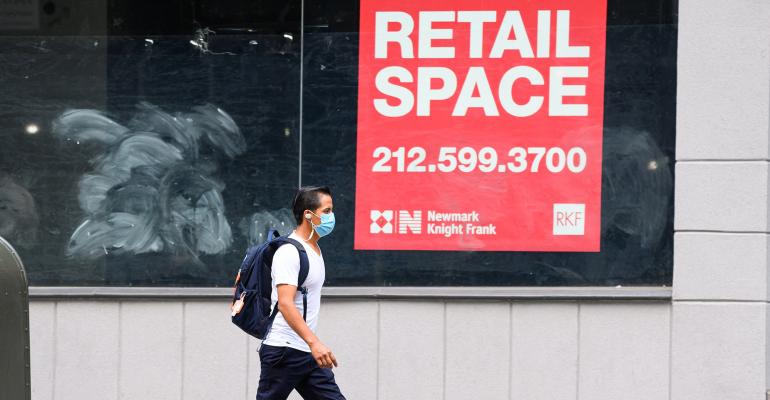 (Bloomberg)—Availability of cheap credit has masked distress, but it’s still out there, says BlackRock managing director Mark Kronfeld. You just have to know where to look.

“Just because you’re not seeing bankruptcy filings doesn’t mean there isn’t distress,” said Kronfeld, a member of the global credit platform at BlackRock Inc., which manages $9 trillion in assets.

There will be fewer traditional bankruptcies -- besides pre-packaged filings -- as long as there’s enough liquidity to ride out the pandemic, according to Kronfeld, who focuses on special situations and distressed investments. Still, there may be more bankruptcy filings in the sectors most impacted by the pandemic, including retail and energy, Kronfeld said.

“Companies, even with increased leverage, are able to get cheap financing,” but risks remain, he said on a virtual panel hosted by SierraConstellation Partners.

There was about $90 billion of distressed debt trading as of April 16, down from almost $1 trillion in March 2020, according to data compiled by Bloomberg. That includes nearly $5 billion in retail bonds and loans, and $15 billion from oil and gas companies.

Last week saw just one new bankruptcy filing from a firm with at least $50 million of liabilities, according to data compiled by Bloomberg. Weekly filings have been trending lower since the end of February.

Bankruptcy filings this year “haven’t been prolific,” with many companies filing with less than $100 million in assets and liabilities, said Richard Bernard, partner at law firm Faegre Drinker Biddle & Reath.

Potential pockets of stress in manufacturing and the higher education sector could emerge, depending on the lasting disruption from the pandemic, Bernard said.

In the latest week, Chilean car importer and distributor Automotores Gildemeister SpA sought court protection after struggling under a heavy debt load. It’s seeking quick approval of a plan to slash debt and hand ownership of the company to secured creditors.

Last week’s total doesn’t include the Chapter 11 case of Plaza Mexico, a mall in Los Angeles County, because an affiliate already entered bankruptcy in February. The mall sought court protection ahead of a planned foreclosure sale last week.

Meanwhile, the amount of traded distressed bonds and loans shrank to about $88.6 billion as of April 16, down 0.4% week-on-week, data compiled by Bloomberg show. Troubled bonds dropped 0.1% while distressed loans fell 1.3%.

Telecoms had more than $17 billion in distressed debt, making the sector the most troubled part of credit markets for the first time since the pandemic began. Since March 2020, oil and gas firms had accounted for the lion’s share of distressed bonds and loans, the data show.

There were 242 distressed bonds from 132 issuers trading as of Monday, up from 232 and 128, respectively, one week earlier, according to Trace data.

Diamond Sports Group LLC had the most distressed debt of issuers that hadn’t filed for bankruptcy as of April 16, Bloomberg data show. Its parent company, Sinclair Broadcast Group Inc., said in a March filing that it expects Diamond to have enough cash for the next 12 months if the pandemic doesn’t get worse.