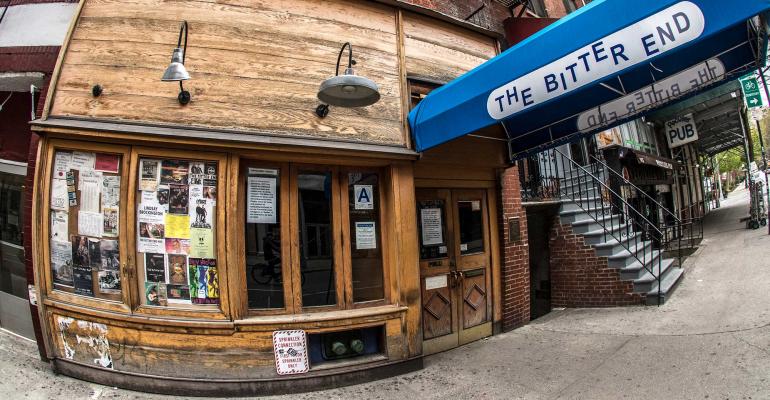 Thousands of club owners are pleading with Congress for a financial lifeline until they can welcome music fans back.

(Bloomberg)—The Bitter End has survived seven recessions, two changes in ownership and the 9/11 terrorist attacks. It might not survive the coronavirus.

The club, located in the heart of Greenwich Village, has been a staple of New York nightlife since it opened in 1961, offering a mix of big-name celebrities and young talent from nearby New York University. Joni Mitchell played there after the release of her debut album in 1968, the same year Nina Simone performed a rousing rendition of “House of the Rising Sun.” Nearly 20 years later, it’s where a young comedian named Jon Stewart first garnered attention.

But the club has been closed since March due to the pandemic, and it’s not clear when the state will allow it to reopen, says owner Paul Rizzo. Though his landlord has given him a temporary reprieve from rent, which costs $23,000 a month, that won’t continue forever.

Rizzo is devising a business plan to reopen, pending approval and guidelines from the state. The cost of doing so will be significant — $40,000 to $60,000 to start — and there’s no guarantee anyone will come. His worst fear is that he opens and has to close down again, as some movie theaters and restaurants have had to do this year. That would be a death blow.

Rizzo is one of thousands of club owners pleading with Congress for a financial lifeline to help them to hold out until they can welcome music fans back — whenever that is. A bipartisan group of senators has sponsored the Save Our Stages act, which would provide six months of financial support to venues. Rather than offering the relief as a loan, which venues would need to repay, the bill would provide grants.

Yet bailing out struggling businesses has been held up by gridlock. While the House of Representatives has passed a new coronavirus recovery act that includes provisions from Save Our Stages, it remains at odds with the Senate over the size of the bailout. The Senate has said it’s waiting on direction from the president, who is busy with his re-election campaign and pushing for a new nominee to the Supreme Court. On Tuesday, President Trump said he wouldn’t negotiate a recovery bill until after the election, though he later softened his stance.

Meanwhile, more owners are giving up altogether. Hundreds of establishments have already called it quits, and about 90% of independent venues say they will be forced to close without government intervention, according to Audrey Schaefer, spokesperson for the National Independent Venues Association.

“Having to wait until after the election would be devastating,” Schaefer said. “Businesses are folding every day as they wait.”

And venues are taking on more and more debt. “They’ve signed personal guarantees,” Schaefer said. “These music venues aren’t like coffee shops and restaurants that you see open and open. Once these are gone, they are gone.”

Few industries have suffered more during the last year than live music, which was among the first sectors to close and will be among the last to reopen. Live music thrives on the very situations — a large group of people, possibly drunk, packed together —  deemed least safe by doctors during the pandemic.

While outdoor activities like theme parks and sporting events are resuming in many states, major concert promoters have said they don’t expect live music to pick up again until next spring or summer — at the earliest. Major music acts won’t tour until they can put together multiple shows in numerous states or countries. In the meantime, agencies, management companies, promoters, ticket sellers and venues have all had to fire staff or close up shop because of the pandemic.

Live Nation Entertainment Inc., the world’s largest concert promoter, has access to enough capital to ride it out. Artists can make money from their recordings or brand deals. But  independent music clubs have few alternatives. Like restaurants, they operate on small profit margins. They don’t collect much of the ticket revenue from a concert, instead relying on selling alcohol and merchandise.

Yet while restaurants can deliver their food at home and offer outdoor seating, most music clubs can’t replicate the live experience at home. Selling tickets to online livestreams isn’t a sustainable business model for thousands of venues.

“The streaming thing is very cool,” Rizzo said, “but if you are a live-music person, a stream just doesn’t do it.”

Venues, promoters and artists have tried to come up with alternatives. Some are staging socially distanced shows. Others are giving up on music altogether — at least for now — and converting to a bar and restaurant.

But these options aren’t possible for many venues, said Farid Nouri, the owner of the Eighteenth Street Lounge in Washington. The space has no kitchen, and he can’t rely on alcohol alone to fill a 10,000-square-foot venue with a capacity of 499 people.

Nouri opened the club in his adopted home city 25 years ago to promote electronic music at a time when few venues offered it. Nouri DJs in his spare time, and has programmed a wide range of music at his club, including jazz, reggae and salsa.

But after a few months of waiting for the chance to reopen, Nouri realized he might not be able to do so anytime soon. Most clubs can’t open fully until a vaccine is available, so Nouri decided to close the club for good.

“My landlord was breathing down my neck for full rent. I had IOUs from vendors and staff waiting to get paid,” he said. “I didn’t see any kind of revenue for I don’t know how long.”

Rob Mercurio is hoping to avoid a similar fate. Mercurio is the bassist in Galactic, a jam band, and the co-owner of Tipitina’s, one of New Orleans’s most famous clubs. He and his bandmates bought the club in 2018 after years of performing as its house band. Their group had formed in New Orleans, and they were upset seeing the place suffer from years of neglect under previous ownership. The band took a small-business loan to make a number of investments.

The venue was eking out a profit before the pandemic, but now Mercurio is at the mercy of banks.

“We’re reaching the end of our rope,” Mercurio said. The venue, which holds 800 people, is too large to function as just a bar. The bank has allowed Mercurio and his partners to defer payments that have helped him keep his full-time staff, which includes a general manager and a talent buyer. But the money they received as part of the Paycheck Protection Program — an earlier federal relief effort — has been depleted. “Real costs are about to hit,” he said.

Business at the Bitter End was slowing down before the coronavirus due to the emergence of an entertainment scene in Brooklyn, said Rizzo, who started working at the club in 1991 after bartending down the block. He became a manager at the Bitter End and acquired a small stake in 1993. A few years ago, the club’s majority owner, Paul Colby, sold his stake to Rizzo.

The Bitter End has been luckier than most because of its history. Rizzo has raised close to $100,000 from two campaigns on GoFundMe. The first $12,000 was for his staff, which he had to let go, and the second campaign, which has raised more than $85,000, is for reopening costs.

But all of that money will go to paying insurance, maintain a sprinkler system and restocking liquor. The club relies on young college students, working professionals and tourists visiting New York. It’s not clear when people will return to the office en masse, or how long it will take for travel to pick up again. For now, a lot of smaller clubs will need money from the federal government to get back open and stay open.

“Even 9/11 we jump-started everything pretty quick,” Rizzo said. “But this time I don’t know if the public will be ready and willing to come back fully.”

To contact the author of this story: Lucas Shaw in Los Angeles at [email protected]