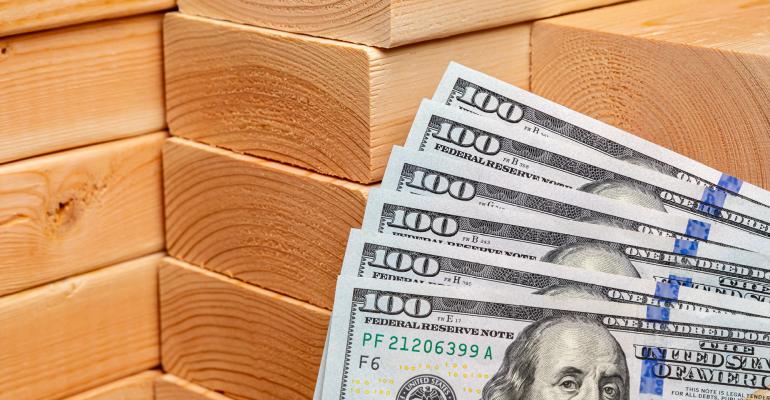 Where you stand depends on where you sit—Rufus Edward Miles, Jr.

High construction costs are a defining feature of today’s commercial real estate development landscape. The causes—most notably the rise in lumber prices—vary, but the impact is significant. Higher costs may contribute to the cancellation or delay of a project. Other outcomes may include an increase in construction budgets, loan amounts, and shifting profit margins for the various transaction parties.

With respect to lumber, according to a Globe St.com article, “Things have moderated some in May. After peaking at $1,686 per thousand board feet on May 7, lumber prices dropped by 23 percent to $1,306 on May 19. They have fallen further in June, nearing their January 2021 pricing levels of approximately $900 per 1,000 board feet.

The Real Deal explains the big picture on material cost increases here, “Multifamily developers are starting to feel the pain of sky-high lumber costs…The costs of materials used in multifamily construction—including lumber, fuel, copper, and steel—have increased 25 to 30 percent over the past year, the publication reported. That is the biggest increase since 1988. Analysts say these costs could cause profit margins to narrow, especially if rents remain unchanged. It could also lead to a slowdown in construction.” However, material costs are only one part of the construction equation.

“The fact is developers have always been and always will be entrepreneurial in making projects work. Projects always expect to have unforeseen costs and material costs increases are just one in a long line of issues that developers have become accustomed to resolving on their projects,” said Will Mitchell, CEO of construction finance platform Rabbet. “The reality is that other levers will need to change (interest rates, rents, density, etc.) for projects to still pencil, but developers are still finding a way to get projects done.”

Those longing for a return to normal might be grateful as rising construction costs were also a market development as far back as 2018 and 2019.  Still, normal conditions mean financial and political challenges around access to decent affordable housing for many in our country as high construction costs contribute to an extra $36,000 per home, according to the National Association of Home Builders. Although wood is less utilized in apartments than some other materials, multifamily construction costs have also risen due to price increases for other inputs.

The uptick of increased economic activity in the construction sector broadly is a positive for the economy and a driver of price increases given the accompanying demand growth.  What is negative for many parties is the volatility in price.  Some of the fluctuations are due to short-term supply chain issues and hoarding, but others are longer term. For example, the lumber prices are not due to a shortage of timber but rather in the production and distribution of lumber.

The costs of building materials are not simply rising; the costs are volatile. As such, the length of time that costs remain elevated, and to what degree, remains more significant than their dramatic height at any one point in time. The price increases are inextricably linked to broader inflation concerns being felt beyond the construction industry. The shift in costs likely impact design choices for various property types and have resulted in some developers buying materials upfront and underwriting the cost of storage until they are needed at a project.  Additionally, alternative choices of materials are being considered by builders for both cost benefits and energy savings.

Contracting Business details here, “Continuing what was described as a ‘meteoric’ rebound, the Architecture Billings Index (ABI) recorded its third consecutive month of positive billings, according to AIA. AIA’s ABI score for April rose to 57.9 compared to 55.6 in March (any score above 50 indicates an increase in billings). Neither score has been achieved since before the Great Recession.”

The Fed’s Beige Book published on June 2nd notes, “Input costs have continued to increase across the board, with many contacts noting sharp increases in construction and manufacturing raw materials prices. Increases were also noted in freight, packaging, and petrochemicals prices.” “The President of the Atlanta Fed, Raphael Bostic, believes that supply chain constraints have factored into the increase in pricing; however, the expectation is that these increases are temporary, and that pricing will return to normal,” stated Brian Bailey, commercial real estate subject matter expert, for the Atlanta Fed.  “Real Estate business owners and developers have cited rapidly rising costs as a reason for delaying the start of new projects; however, a number of construction inputs have experienced notable recent pullbacks in pricing.”

Rising construction costs do more than simply increase a construction budget for ground up developments. Existing buildings see their replacement costs increase and their value may follow.

The pandemic has disrupted the supply chain for construction materials, while the demand has been greater than forecasted. These twin forces have led to short term issues, but the longer-term effects are still unknown.  Pricing pressures for timber have eased considerably over the past month or two; however, markets for building projects and the associated material inputs will continue to evolve and impact outcomes as the economy recovers.