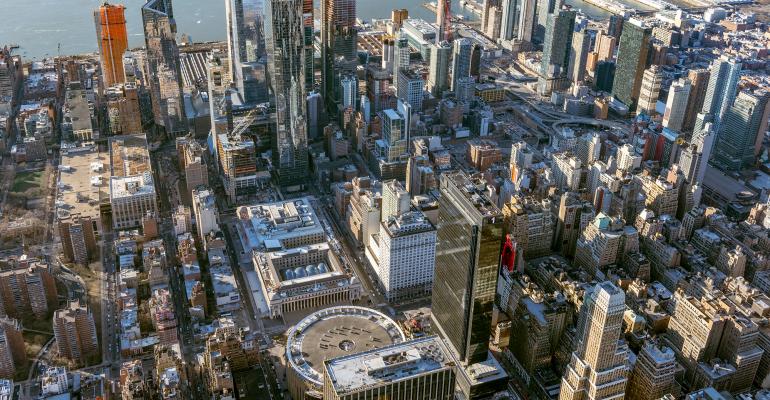 NYC’s Developers Plow Ahead with Ambitious Plans to Reshape City

Even as COVID-19 has crushed local CRE values, developers are making big bets NYC will rebound.

(Bloomberg)—New York City’s builders have had a curious reaction to a pandemic that emptied Manhattan’s office towers, shuttered restaurants and kept tourists home.

Over the past year, as scores of businesses closed and many residents beat it out of town, developers doubled-down on visions of steel-and-glass grandeur, hatching plans that could transform the city.

Vornado Realty Trust recently said it will demolish the Hotel Pennsylvania and add an office tower taller than 1,200 feet (366 meters) at the site by Madison Square Garden.

Near Grand Central Terminal, giant towers are sprouting, including a project to redevelop the Grand Hyatt next to the transit hub. The developers are proposing a 1,600-foot skyscraper that would be among the tallest in the Western Hemisphere.

Manhattan has been one of the hardest-hit places in the U.S. over the past year. But even as Covid-19 has crushed commercial-property values, developers are making big-money bets that it’s only a matter of time before Manhattan is Manhattan again.

“Developers are optimistic by nature,” said Jim Costello, senior vice president at Real Capital Analytics. “The market they care about isn’t the here and now. It’s about where the market will be when their project is complete.”

After office construction in New York City ground to a virtual halt in the second and third quarters of last year, developers began work on $2.7 billion worth of projects in the final three months of 2020, according to data from Real Capital Analytics.

That was down roughly one-third from the fourth quarter of 2019, but large enough to show builders and lenders haven’t lost their appetite for risk.

Still, New York City landlords are digging out of a deep hole. The city has estimated that the value of Manhattan office buildings will drop 25%, with hotels worth 31% less. Apartment rents have slid amid a flood of vacancies, while key retail corridors are plagued by empty storefronts.

New York commercial mortgage-backed securities saw a surge in delinquent loans over the past year, reaching a total balance of $5.8 billion in March, according to data firm Trepp. That equates to an overall delinquency rate of 5.77%. The jump was largely due to pain in the retail and hotel industries, though office delinquencies also soared.

There are signs of revival in Manhattan these days. Foot traffic is ticking up in Times Square and other key corridors as tourists trickle back. Comedy clubs are open and restaurant tables are filling up with weather getting warmer.

Vornado Realty Trust Chief Executive Officer Steven Roth’s ambitious plans for the area around Penn Station are a bet that office workers will eventually stream back into Midtown, which is key to Manhattan’s recovery.

“The success of our business will continue to depend upon talented workers gathering together,” Roth wrote in a recent letter to shareholders. “I guess the kitchen table has a place for some, but I continue to believe the urban office is the future of work.”

Across town, the project to build a new office tower at the site of the Grand Hyatt is now nearly 30% bigger than when it was introduced two years ago. And developers RXR Realty and TF Cornerstone are moving forward with plans to put a 500-room hotel at the top of the building.

SL Green Realty Corp., the city’s largest office landlord, secured a $1.25 billion construction loan to redevelop a giant office tower in the tech-friendly Flatiron district. The firm also opened One Vanderbilt in September, a $3.3 billion skyscraper near Grand Central that is about 75% leased and features a restaurant by Daniel Boulud. A couple blocks away, Boston Properties Inc. has proposed an office tower that may rise more 1,000 feet at a former MTA building on Madison Avenue.

Even as vaccines fuel optimism about a return to the office, it’s easy to be skeptical about these projects. JPMorgan Chase & Co. is building a massive new headquarters near Grand Central, but CEO Jamie Dimon recently said he envisions some employees working remotely, with the bank perhaps needing maybe 60 seats for every 100 employees.

Other finance firms, meanwhile, are expanding in Florida as wealthy financiers move south to avoid New York’s higher taxes. In a recent research note, Bank of America Corp. analyst James Feldman downgraded SL Green and Vornado, arguing that a decrease in demand for space will weigh on rents into 2023.

For now, most of Manhattan’s employees are staying home as companies eye a return after September’s Labor Day holiday. Goldman Sachs Group Inc. and JPMorgan have said they’ll bring their summer interns to the office, but fewer than 14% of workers in the New York metropolitan area were back at their desks as of April 7, according to data from Kastle Systems.

Office availability, meanwhile, is at the highest level in at least 30 years, worse than it was after the terrorist attacks of 9/11 and the financial crisis.

Still, New York has bounced back before, and its status as a business hub should help fuel the rebound, even if it takes time, according to Kathy Wylde, CEO of Partnership for New York City.

“Manhattan is well-positioned for the future because it’s a global hub of finance, tech and education, which are keys to success in the innovation economy,” she said. “The rebound in the office market will not, in my view, happen quickly.”

--With assistance from Alex Wittenberg.