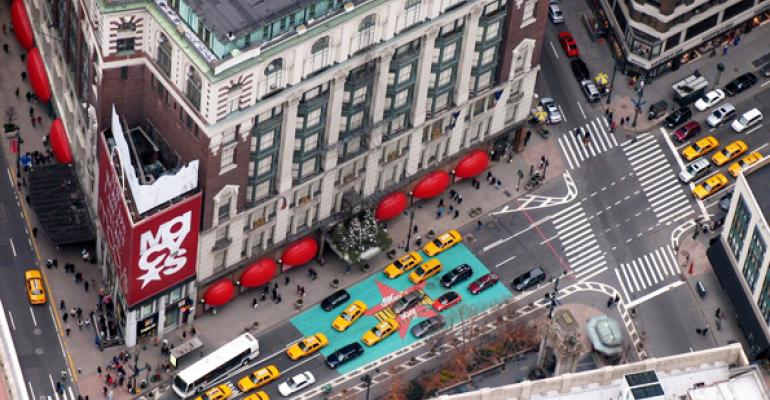 The proposed 1.5-million-sq.-ft. office tower requires zoning changes that would have to be approved by the city.

The struggling retailer, trying to generate cash off prime real estate in midtown Manhattan, recently unveiled plans for a 1.5 million-square-foot building atop its iconic store in Manhattan’s Herald Square. But the proposed office tower requires zoning changes that have to be approved by the city, a potentially thorny political process that can delay, or even quash, the project.

“There are projects on individual buildings that have been going on for decades because of political issues,” said Noah Kazis, a legal fellow at NYU’s Furman Center. “Whether you move relatively quickly or get dragged out for years and years and years -- that’s the question about the politics of this project.”

The plan for the real estate development came to light last April, when Bloomberg News reported that the company had floated plans for a 1.2 million-square-foot tower in preliminary talks with city officials. At the time, a source familiar with the discussions said Macy’s would probably push for zoning changes to allow for an 800-foot building.

The city council had “periodic” discussions with Macy’s about the project last year but was not briefed before the plan was unveiled recently, according to a city council spokesman.

Lining up political support could be key for Macy’s, which is looking to the real estate project to help assuage investor concerns. The company’s shares plunged 43% in 2019 and it recently said it would close 125 stores and slash 2,000 jobs as it tries to navigate a brutal climate for brick-and-mortar retailers that have been battered by e-commerce.

Douglas Sesler, who oversees real estate for Macy’s, said recently that the company continues to work with the city to obtain the necessary permits and that the process may continue until the end of 2021.

“It’s certainly a process that requires a lot of stakeholder input,” said Keith Powers, a city councilman in Manhattan. “It could take years to get it to final conclusion.”

Before approving a zoning changes, the city could ask Macy’s for concessions, like transit upgrades at the busy Herald Square subway station. That could delay the project, according to Caroline Harris, a New York City land use attorney.

Macy’s Chief Executive Officer Jeff Gennette has acknowledged that the company proposed a “massive project” that would include making improvements around Herald Square, but declined to share specifics about discussions with the city.

“We’re being very respectful of our partners,” Gennette said. “They have a strong point of view and they should. This is an important project for everybody so we’re going to do it carefully.”

While the Macy’s project is in the early stages, there’s been a flood of new development around Herald Square. The Hudson Yards area, a couple blocks west of Macy’s, has attracted high-profile technology and finance tenants, including Amazon, Facebook and Wells Fargo.

Developers are also ramping up efforts to finally spruce up the area around Pennsylvania Station, with real estate billionaire Steve Roth’s firm, Vornado, spending more than $2 billion to redevelop over 5 million square feet in the area.

And while that means potential tenants won’t lack for options, and could raise questions among city officials about the need for the Macy’s zoning changes, the company argues that all that activity is good news, showing there’s demand for its proposed tower.

“We’re excited about this project in large part because of location,” Sesler said. “The center of gravity in midtown Manhattan has clearly shifted to the southwest.”