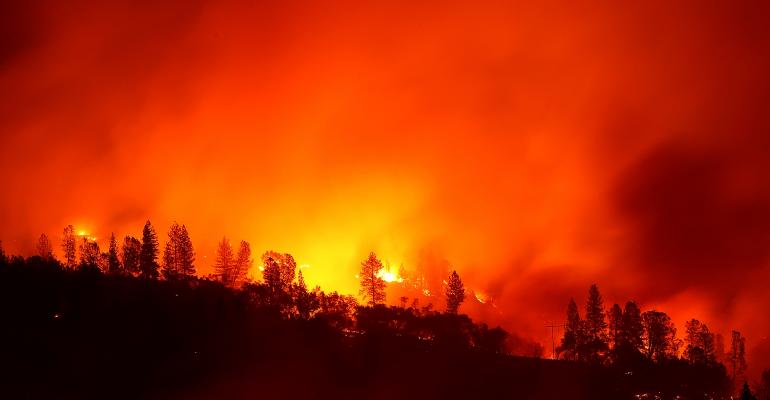 Living with Fire: Editorial Board

When it comes to planning new construction in California, the probability of wildfires needs to be considered.

(Bloomberg Opinion)—Hundreds of thousands of Californians have been forced to flee their homes. Millions have endured power outages. Fire damage could reach billions of dollars. It could have been worse: So far not a single person has died, unlike last year, the deadliest on record. But that’s about as much good luck as one can expect now during California’s fire season. When it comes to planning new construction, this reality needs to sink in.

California’s geography and ecology make it naturally prone to wildfires. An aging power system and especially climate change have increased the risk. As a result, fire season is longer and more dangerous than ever. Fully half of the 20 worst blazes in state history occurred in the past four years, and the trend is likely to get worse.

California’s wildfires aren’t going away. The question is: Will people keep building, heedless of the danger?

Almost 3 million Californians live in very-high-risk fire zones. The greatest danger is in the “wildland-urban interface” — what one expert describes as “that increasingly fiery border where urban sprawl meets a wild or feral landscape.” Wildfires spread especially quickly in these borderlands and are exceptionally difficult to extinguish. For decades, the vast majority of houses destroyed by wildfires have been in that interface.

Unfortunately, that’s where California keeps putting new houses. From 1990 to 2010, nearly half of the state’s new housing units were built in the wildland-urban interface. San Diego County recently approved a 1,100-unit development “along a two lane road in an area routinely scorched by wildfire.” Los Angeles County recently approved a 19,000-unit development in an area that’s been set ablaze 31 times in 50 years.

Why build homes in a wildfire zone? Thank perverse incentives. Some small California towns, constrained by state law from raising property taxes, turn to new construction to raise money. Meanwhile, homeowners in the state’s largest cities — which are generally easier to defend from fire — are dead set against new housing projects. As low- and middle-income workers increasingly settle in fire zones, the state subsidizes their fire insurance, and the federal government pays to rebuild when their homes inevitably burn. And the cycle begins anew.

Late last year, shortly before he retired, California’s top firefighter floated a subversive idea: Officials should consider banning construction in dangerous fire zones. Governor Gavin Newsom is unpersuaded. He favors better fireproofing, and says, “There’s something that is truly Californian about the wilderness and the wild and pioneering spirit.” Californians might be starting to wonder about that. Three-quarters now say there should be limits on building in fire zones, with support crossing demographic and party lines.

Of course, restricting development in fire-risk areas would make California’s housing crunch even worse, as critics have noted. That’s why it needs to be paired with a push for new housing elsewhere — particularly in the major cities. California-based technology giants Apple, Facebook and Google have all pledged financial support for new housing programs in the state. They’d be wise to use their money and their influence to push for more housing in safe, high-density areas.

There’ll be resistance to that kind of development. Homeowners, fearing for their property values, have so far opposed such plans. But the status quo already costs billions, and the human toll becomes clearer with every wildfire season. Building and rebuilding communities in areas at risk of burning is a truly unnatural disaster.