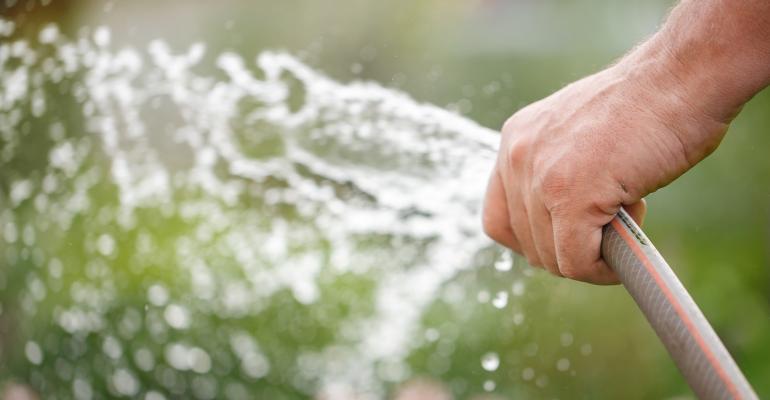 Small data centers in dense urban areas running close to full capacity are most likely to need emergency hosing during a hot spell. The spray lowers the ambient temperature around the air conditioning unit’s coils to ensure they continue to dissipate heat effectively.

“Many data centers in London will have people on the roof with hoses at the moment,” said Adrian Trevelyan, After Market Director at Airedale International, which provides and maintains cooling systems for data centers.

Small data centers in dense urban areas running close to full capacity are most likely to need emergency hosing during a hot spell. The spray lowers the ambient temperature around the air conditioning unit’s coils to ensure they continue to dissipate heat effectively, Trevelyan said. He declined to name any specific companies adopting this technique, but said that it was happening “within the M25 and into the City.”

Hyperscale data centers run by technology giants often use vast amounts of water -- Google struck a deal in the US that guarantees it 1 million gallons a day to cool one data center. Because of their large size, they have space to add extra cooling capacity to cope with temperature spikes. However, they are not immune to overheating: on July 10, there was a power outage at an Amazon Web Services data center in London due to what the company described as a “thermal event.”

“It might get you out of a fix on a very hot day, but you are possibly shortening the equipment’s life,” she said, noting that if it’s done in places with hard water, such as London, it can lead to a build up of scale on the equipment. Properly designed evaporative cooling systems use treated water, she said.

Outages aren’t the only risk for data centers in a heat wave, Flucker said. Many “colocation” operators, who rent out capacity to third parties, face financial penalties for failing to keep the hall within a contractually agreed temperature range.