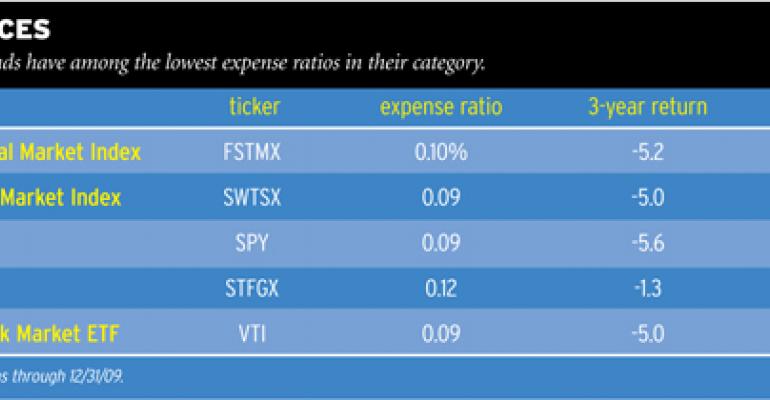 Like hard-pressed retailers, investment managers have lately taken to lowering prices. Mutual funds and ETFs have cut expense ratios. Even exclusive hedge funds have reduced the fees they charge clients. Some of the fee cuts may be temporary measures aimed at attracting sales during the recession. But the trend toward lower expenses seems likely to continue.

Like hard-pressed retailers, investment managers have lately taken to lowering prices. Mutual funds and ETFs have cut expense ratios. Even exclusive hedge funds have reduced the fees they charge clients. Some of the fee cuts may be temporary measures aimed at attracting sales during the recession. But the trend toward lower expenses seems likely to continue. At a time when the Internet is making it easier to compare prices, investors are searching for bargains whenever they shop.

Of course, not all fund managers are cutting costs, which is widening the gap between what is low-cost and what is expensive. And that makes it increasingly important to shop hard for the cheapest funds.

Some of the most aggressive price cuts have come from Charles Schwab, which recently introduced a group of low-cost ETFs. With an expense ratio of 0.08 percent, Schwab U.S. Broad Market (SCHB) undercuts popular S&P 500 trackers on pricing, including SPDRS (SPY) and iShares S&P 500 (IVV), which both charge 0.09 percent. Schwab International Equity (SCHF) charges 0.15 percent, compared to 0.35 percent for iShares MSCI EAFE.

Besides offering rock-bottom expense ratios, Schwab is also allowing investors to trade the new ETFs for free. This represents a bold stroke, since investors typically pay standard brokerage commissions to buy and sell ETFs. Because of the commissions, it has rarely made sense for investors to purchase small quantities of ETFs instead of no-load funds, which come with no sales charges. But now an investor who wants to set aside $200 a month into blue-chip stocks can use a Schwab ETF instead of open-end index funds.

Like ETFs, hedge funds have been reducing expense ratios. Hedge funds have traditionally charged annual management fees of 2.0 percent, plus performance or incentive fees on top of that. But, dissatisfied with the fees, many clients have been negotiating lower costs. The average annual fee is now 1.63 percent, according to Preqin Ltd., a consulting firm.

Surveying big clients, Preqin found that half had sought lower fees from their hedge funds. Of those who negotiated for fee reductions, most won some concessions, including many clients who now pay less than 1.5 percent. “After the downturn, a lot of hedge funds need to do what they can to find new investors,” says Amy Bensted, an analyst for Preqin.

While mutual fund investors have little room to negotiate, many are benefitting from lower fees. The average dollar invested in a domestic equity fund now faces an expense ratio of 0.78 percent, down from 0.91 percent five years ago, according to Morningstar. The decline is partly due to cuts at funds such as Arbitrage (ARBFX) and Longleaf Partners International (LLINX), which recently reduced their expense ratios by 20 basis points.

While some index funds can help to reduce costs, not all passive funds are cheap. According to Morningstar, 56 domestic equity index funds charge more than 1 percent in fees. Plenty of active funds are much cheaper, including State Farm Balanced (STFBX), which charges 0.13 percent, and Vanguard Energy (VGENX), with an expense ratio of 0.32 percent.

Whether you prefer active funds or indexers, the case for using only cheap choices is clear. Many studies have shown that low-cost funds outdo expensive ones on average. Recent research by Morningstar highlights another problem of expensive funds: they tend to liquidate or merge out of existence. In a typical pattern, a company starts a fund with a high expense ratio. Burdened by stiff costs, the fund delivers mediocre returns and attracts few investors. The result is skimpy profits for the company, which shuts down the loser. Shareholders are left with a redemption check—and perhaps a tax bill if the liquidation generated capital gains.

To determine the odds of a fund liquidating, Morningstar divided its universe into five groups based on their expense ratios. Among domestic stock funds, 49 percent of the most expensive funds shut down within 10 years, double the rate for the cheapest funds. So investors who buy an expensive fund must be aware that their investment is more likely to disappear.

Should companies continue lowering expense ratios? Yes, argues bond star Bill Gross. With the economy weak, investment returns will remain in single digits for years, Gross says. In an era of 5 percent returns, fund companies should no longer charge 1 percent—that represents a full fifth of an investor’s gains, after all.