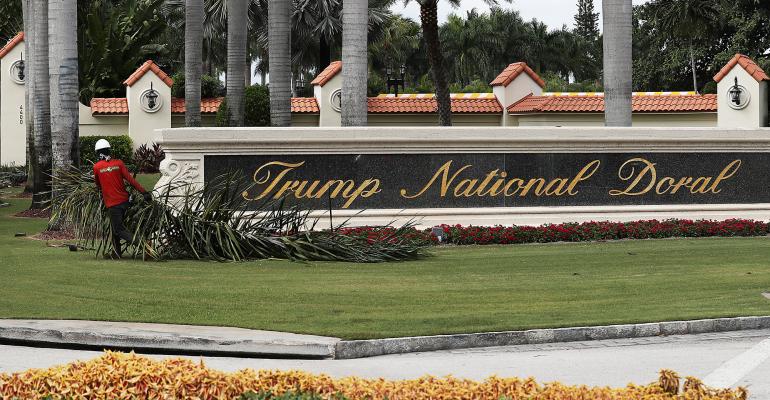 Trump’s Pandemic Woes Are Hitting Hardest In His Own Backyard

Revenue at the Florida resort has tumbled, hundreds of workers have been furloughed and the broader Trump brand is under distress.

(Bloomberg) --  After leaving the White House, Donald Trump decamped to Mar-a-Lago, the club that served as a backdrop to much of his presidency and where he still gets a standing ovation from members in the main dining room. But it’s another Florida property, about an hour and a half south, that’s key to his business empire’s future.

With its four golf courses and sprawling luxury hotel, the Trump National Doral Miami has for years been one of the Trump Organization’s biggest cash cows. Now, it is among the properties suffering most from the Covid-19 pandemic and a contentious presidency capped by a second impeachment.

Revenue at the Florida resort has tumbled, hundreds of workers have been furloughed and the broader Trump brand is under distress. For the billionaire businessman-turned-politician, who bought Doral out of bankruptcy in 2012, the property holds particular importance: It has $125 million in loans coming due in two years that he has personally guaranteed.

Eric Trump, who took the reins of the Trump Organization with his brother Don Jr. after Donald Trump became president, said in an interview that Doral is a highly valuable property that “has been a great success story for our company.”

Less than 10 miles from the Miami airport, the Doral resort splays across the 60,000-person town it’s named for. The place projects a pre-White House version of the Trump brand, evoking more the reality TV character than the man who held the U.S. presidency for four years.

Ornate podocarpus hedges wind around ostentatious fountains, elevator doors shimmer gold and the former-president’s visage -- via posters and magazine covers -- watches over guests. Trump’s name is on dozens of hats and shirts for sale in the pro shop, but you won’t find any MAGA merchandise.

On a recent sunny Wednesday afternoon, nearly a year after the pandemic upended American life, it was quiet, though not dead. The club’s pools and restaurants had just a few people milling about. Staff said the hotel was running well below normal occupancy, but golf carts could be seen zooming across the links in the shadow of a massive American flag.

As with all resorts, the business has taken a big hit from the coronavirus. Mandatory financial disclosures Trump filed with the Office of Government Ethics show Doral had $44.2 million in revenue last year and the first 20 days of 2021, with the restaurant at the club adding another $1.6 million. While that was more than any other asset Trump lists, it’s a significant decline. Before Covid, the property brought in at least $30 million more annually than it did in 2020. 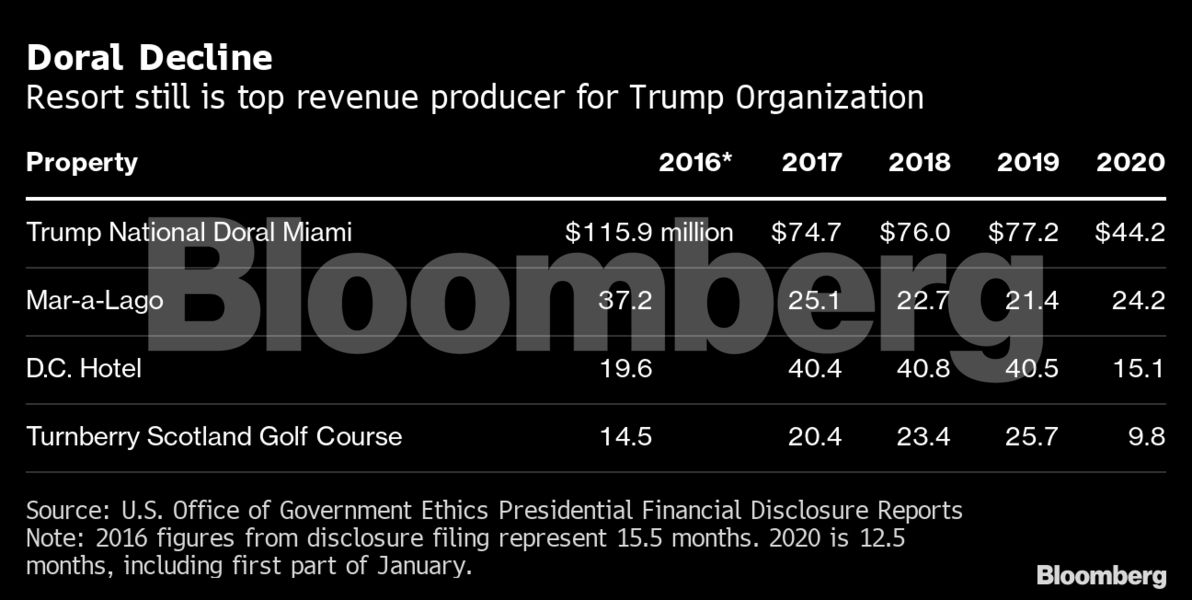 In March, Doral temporarily laid off or furloughed 560 workers -- mostly cooks, servers and housekeepers, according to a government-required notice of layoffs. It made 250 of those layoffs permanent in May. In August, it sent another notice that 88 workers’ temporary furlough would last at least six months.

“This has definitely been the most, or if not the most, one of the most challenging environments the lodging industry has ever gone through,” said Lukas Hartwich, managing director with real estate research firm Green Street, who didn’t comment directly on Trump’s properties. He expects it will take until the middle part of the decade for hotels to recover and longer for places that host many corporate conferences, like Doral.

Still, Doral’s business appears to have been down from before Trump took office, even as the presidency fueled concern that he would use his role to boost his properties. The 2017 forms showed $115.9 million in revenue at Doral for the prior 15.5 months.

During the presidency, Jessica Vachiratevanurak, a tax consultant for the Trump Organization, advocated to a Miami-Dade County official that Doral’s tax bill be lowered because it was “severely underperforming” other area resorts, according to a 2019 story by the Washington Post. She cited “some negative connotation that is associated with the brand,” the Post reported.

For all the troubles, there are bright spots for the resort and Trump. The pandemic has sent people flocking to Miami for better weather and looser restrictions, and golf is seeing a renaissance as a safe, socially distanced outdoor sport. While the hotel’s conferences and weddings have been on pause, Doral is seeing bookings for later this year and early 2022, said a person with knowledge of the resort, who asked not to be named speaking about its performance.

Trump won Florida in the election and has plenty of supporters there. And if the hotel continues to struggle, the property is on valuable land that could be redeveloped for lucrative uses such as condos.

“Doral is probably the most valuable property in south Florida,” Eric Trump said. “It’s 700 acres in Miami and that is invaluable.”

As long as Trump Organization can repay its debts, the company also likely has bigger plans for its future than golf clubs and hotels. After an election in which Trump won 74 million votes, people have speculated that he will start his own TV channel, or even a newsletter, asking supporters to shell out cash to subscribe. Eric Trump declined to comment on future ventures.

The success of those efforts may depend on the damage to Trump’s brand in the wake of the insurrection at the U.S. Capitol that was incited by his attempts to overturn the election. The outcome of the impeachment trial that starts this week may be critical to the business, said Eric Schiffer, a branding consultant.

If he’s convicted, it “ratifies and cements his legacy as being fully impeached and also barred from the presidency,” Schiffer said. “That’s as close as you can get to being buried alive as a brand.”

Perhaps even more crucially, the Capitol riots also spurred several financial institutions that worked with Trump to cut ties with him, including Signature Bank, BankUnited and Professional Bank -- as well as Deutsche Bank AG, which holds more than $300 million in loans to the former president. That includes two totaling $125 million that were used to pay for Doral and its $250 million renovation.

The fate of those loans is unclear now that Deutsche Bank has said it will do no more business with Trump and his private banker, Rosemary Vrablic, has departed the German lender.

Vrablic was key to Doral’s financing. When Trump sought to purchase the resort in 2012, Doral was bankrupt and in dire need of a makeover. His relationship with Deutsche Bank had soured after Trump defaulted on loans and even sued the lender, so he turned to Vrablic for help. She was invited to travel to Florida to look at Doral and asked her boss to approve a loan for Trump promptly upon her return to New York, according to Dark Towers, a book by David Enrich about Deutsche Bank.

Vrablic left Deutsche Bank in December 2020 after the firm’s internal investigation found that she engaged in “undisclosed activities” related to a real estate deal. Deutsche Bank declined to comment on the Doral loans. Vrablic didn’t return a call requesting comment.

The fact that the loans are personally guaranteed means that if Trump is forced to sell Doral to repay Deutsche Bank, but it’s no longer worth $125 million, then the bank can seek to recover the remainder from him. He has options in his favor: Low interest rates and liquidity in the market may make it easy for him to turn to other lenders.

For many Doral visitors, the name on the door may just not matter.

Jeff Eaton, a 71-year-old Chicago-based dentist, recently returned to the resort for the first time since 2019. He’s been golfing at the club since long before Trump bought it.

“It isn’t political,” he said. “When you’re out there, it’s you and the club. I play with Democrats and I play with Republicans.”

--With assistance from Jonathan Levin and Tom Maloney.