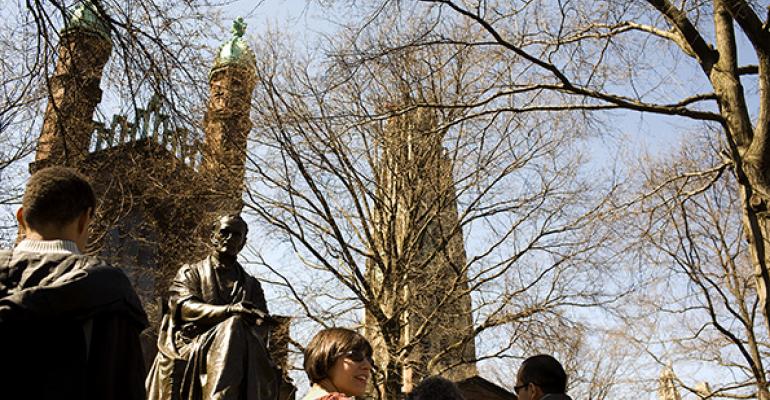 (Bloomberg) -- U.S. college endowments are poised to take the worst slide in performance since the 2009 recession.

Funds with more than $500 million lost a median 0.73 percent in the fiscal year through June 30, while endowments of all sizes lost 0.74 percent, according to results published Tuesday by Wilshire Trust Universe Comparison Service, a database provided by Wilshire Associates. The service reports quarterly on about $3.6 trillion in assets under management and 1,300 plans.

The numbers are an early look at the potential lackluster returns endowments may report this fall. Many of the wealthiest schools rely on endowments for their budgets, and most determine how much they spend based on a three- or five-year average of returns. Performance was affected by the worst month for the Standard & Poor’s 500 Index in more than three years last August amid concerns about slowing global growth.

“Going forward, expected returns are going to be subpar, perhaps much lower than they have historically experienced,” said Maggie Ralbovsky, a managing director at Wilshire’s consulting business. “Diversification hasn’t helped in the last five years. The more diverse you are, the worse off you are.”

For fiscal 2016, a benchmark 60/40 portfolio of the Wilshire 5000 Total Stock Market Index for U.S. equities and the Wilshire Bond Index returned 4.5 percent.

The largest endowments are no longer mostly invested in U.S. equities, a shift that began some three decades ago. Endowments sought to follow a model designed by Yale University, which now invests more than 50 percent of its fund in private equity and other illiquid assets.

University funds weren’t the only institutional investors to see low returns.Public pension funds with more than $1 billion in assets posted annualized returns of 7.35 percent in the 20 years through fiscal 2016, the lowest ever recorded by the service, which dates back 35 years.

Public pensions had a median increase of 1 percent for the year ended June 30, the smallest advance since 2009, when the funds lost 16.2 percent.

State and local pensions count on annual gains of 7 percent to 8 percent to pay retirement benefits for teachers, police officers and other civil employees. When pensions don’t meet their targets, governments often put more taxpayer money into the funds to make up the difference. The need to do so has led to credit-rating cuts for New Jersey and Illinois, which are being squeezed by rising retirement bills.

The survey is an effort between Santa Monica, California-based Wilshire Associates and custodial organizations that submit asset positions and performance data.