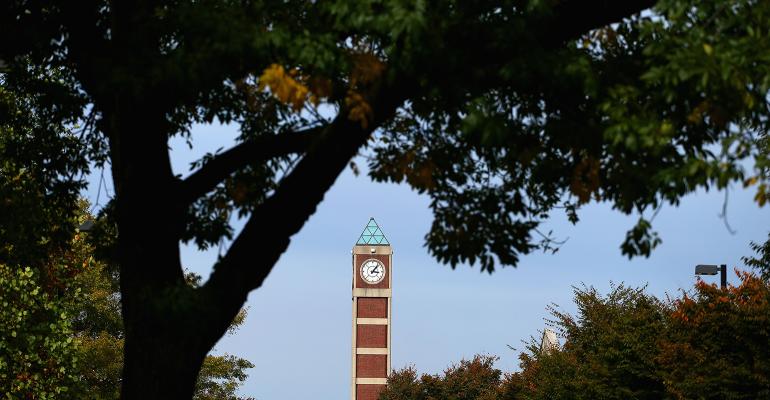 <p> The U of L Student Activities Center and Clock Tower.</p>
Investment>Equities

U.S. university endowments, which are heavily weighted to global equity markets, are facing a grim fiscal year that ends June 30.

(Bloomberg) -- It’s been a rough time for the University of Louisville, and not just on the basketball court.

With an 8.5 percent loss in the first seven months of its fiscal year, deeper than the 6.6 percent decline in the Standard & Poor’s 500 Index, the $646 million endowment is severing ties with its poorer performing managers and shifting assets into private equity. It also pulled money from hedge funds such as Adage Capital Management and Highfields Capital Management to cover contributions to the university’s operating budget.

“We’ve fired managers and hired new managers,” Michael Kramer, the director of investments at the foundation that oversees the assets, said in an interview. “We’re selectively looking for opportunities.”

U.S. university endowments, which are heavily weighted to global equity markets, are facing a grim fiscal year that ends June 30. Of a dozen state schools surveyed by Bloomberg, the average loss was 3.8 percent through Dec. 31. Some schools are evaluating their portfolios. The University of California, which manages $8.8 billion, plans to pull money from the worst-performing hedge fund managers and redirect assets to top firms.

In light of lower expectations for returns, endowments and other nonprofit groups said they plan to make shifts in asset allocations over the next 12 months to 18 months, with increases to private equity, venture capital and real estate and decreases to fixed income, according to a February survey of 156 respondents by investment manager Commonfund.

As if it weren’t bad enough that the men’s basketball team forfeited post-season play while potential rule violations are investigated, the size of Louisville’s endowment has contracted 17 percent in the current fiscal year, the foundation said in a report on March 7. In addition to the investment decline, the assets shrunk because of payouts to the school, Kramer said.

The fund’s long-term performance has fared better, with a 5.4 percent annual gain over a decade through December, topping a Cambridge Associates benchmark of 5 percent for schools with $500 million to $700 million in assets, according to the report.

Since the beginning of last year the fund pulled more than $100 million from at least 18 outside money managers, according to the report. It liquidated $20 million with Boston-based Adage Capital to finance spending on the university’s operations, Kramer said.

“They have actually performed very well,” Kramer said in an e-mail about the hedge fund founded by former endowment managers at Harvard University. “We still have $61 million with them.”

The endowment redeemed $2 million, also for school budget reasons, from Boston-based Highfields Capital, another of the so-called Crimson Cubs started by Harvard alumni, leaving it with $11.6 million there.

The foundation terminated another six managers overseeing $45.2 million, including Mason Capital Management, a hedge fund that lost 20 percent from the beginning of 2014 through three quarters last year betting on companies that are distressed or going through mergers and other corporate events. Mason Capital didn’t immediately respond to a call seeking comment.

Of the $78 million of new investments, more than half went to private equity fund managers, including $4 million to Cerberus Institutional Partners VI LP, which buys distressed assets in Europe. More than a quarter went into energy and natural resources, including $5 million to EnerVest Energy Institutional Fund XIV LP and $4 million to Ridgewood Energy Oil & Gas Fund III LP, according to the report. Both are based in Houston.

The state school is trying to catch up with peers by increasing commitments to private equity, according to Letitia Johnson, a managing director at Cambridge Associates, the foundation’s investment consultant. The endowment’s performance has also been hurt by its overweight position in emerging markets though it’s sticking with the allocation, she said.

“At some point we’ll get paid very nicely for holding that position,” Johnson told the finance committee at a March 7 board meeting, according to a video posted on the foundation’s website. “We think that’s going to be a winning bet over time.”

The portfolio’s decline in the first seven months through January was led by a natural resources and energy portfolio that lost 26 percent. Around 10 percent of the university’s assets are energy holdings, including private and public fund managers, Johnson said.

Private equity firms raised more than $20 billion to buy distressed assets as petroleum prices fell by more than half between 2014 and the beginning of this year. Much of the money remains on the sidelines even as oil prices recover, with West Texas crude topping $40 a barrel this month after trading at less than $27 in February.

Since December, Louisville has committed $8.5 million to Harvest Fund Advisors LLC, a Wayne, Pennsylvania-based manager that buys publicly-traded companies that store and distribute petroleum, according to the report. It pulled more than $13 million from commodities and global natural resource funds at Wellington Management Co. because of poor performance, Kramer said. Wellington declined to comment.

The endowment invested $5 million with SailingStone Capital Partners, a global natural resources fund manager that started in San Francisco in 2014, shifting money from RS Investments, where the founders used to work, Kramer said.

“We’ve been doing a good amount of work to reposition that portfolio to take advantage of what’s going on in the markets today,” Cambridge’s Johnson told the board about the natural resources allocation. “The last 18 months have been extremely painful.”