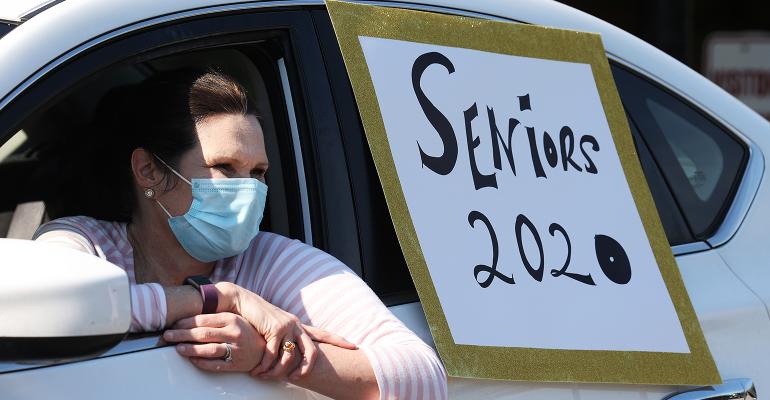 COVID-19 and Its Impact on College Admissions

The pandemic has wreaked havoc on the higher-ed world.

The COVID-19 pandemic has created much uncertainty for colleges and universities and how things are going to play out in the fall.

And that has triggered great anxiety for college students, parents and, of course, college administrators, professors and everyone else who works on thousands of campuses across the country.

COVID-19 has significant implications for college admissions, and there are realities that your clients need to know that involve such crucial issues as financial aid, merit scholarships, delayed admissions and appealing awards during this pandemic. Here are seven things to know about its impact on the higher-ed world:

1. According to student surveys taken since the pandemic upended all of our lives, students generally say they are less likely to attend schools far away. If this does become a reality, higher-ed institutions that would benefit would probably be community colleges and regional state universities.

The schools that would likely be hurt the most by a stay-local trend would be private colleges and universities that don’t have highly coveted national brand names. In contrast, the Ivies, Stanford and a few other elites should not have any trouble filling their freshman slots. But even the most highly ranked schools are likely to maintain larger wait lists.

2. It was already extremely difficult for many private institutions, beyond the alpha dogs, to meet their annual freshman enrollment goals, and the pandemic made this situation much worse.

Most private colleges and universities have been providing historically high tuition discounts to freshman applicants for years, and now many will probably be forced to dig even deeper to offer more. According to the latest discounting report from the National Association of College and University Business Officers, nearly 90% of freshmen received an institutional grant (merit and/or need-based) at private institutions. The typical freshman discount covered nearly 60% of the school’s tuition/fees.

Though boosting their discount rates even more would normally be financially reckless for many schools, the alternative—potentially shutting their doors for good—is worse.

3. For fall’s crop of high school seniors, the award packages from some schools will likely be better. While this will likely be more of a phenomenon with private colleges, it is certainly possible that state universities, which like to recruit high-income nonresidents, might fatten their merit awards.

4. Thanks to the pandemic, it is even more worthwhile to appeal an award. And for students who hope to head to college in the fall, it is not too late to appeal a financial aid or institutional merit scholarship now.

I heard recently from a mom whose daughter had received a $15,000 merit award from Miami (Ohio) University, a public institution, and had unsuccessfully requested a larger award in late February. When the reality of the pandemic sunk in, the student’s Miami admissions counselor asked the student to resubmit her request for a bigger scholarship. Miami gave her an extra $2,000 a year and then a few days later kicked in an additional $4,000 a year. That adds up to $32,000 the family wouldn’t have to pay over four years.

5. May 1 was the official deposit day for new college students, but that isn’t the case for many any longer. Many colleges have extended the deposit date to June 1, and it’s likely that plenty will accept students beyond that date.

In fact, it’s a sure thing that some colleges will be actively recruiting students throughout the summer even if they have committed to a different school. Collegiate codes of ethics used to prohibit this recruiting behavior, but a higher-ed industry group agreed to drop that prohibition in a settlement it reached with the U.S. Department of Justice last fall. The Justice Department concluded that the industry practice had been noncompetitive.

6. It’s highly likely that some schools will not survive the pandemic, and it’s important that families be aware of this as they search for affordable schools. Since the pandemic hit, at least three small Midwestern colleges that have been in existence since the 1800s—Holy Family College in Wisconsin, Urbana University in Ohio and MacMurray College in Illinois—have announced that they are closing this year. All of the schools had just a few hundred students, which is a big red flag.

A tool that you can use to check the financial viability of a private college or university is Forbes' College Financial Health Grades. The tool analyzes the finances of all not-for-profit private colleges that have at least 500 students. The most recent update was rolled out last fall, and the tool grades on a scale of D to A+ at 933 institutions.

7. Because of the uncertainty, more incoming students are expected to ask colleges for a deferral. Worried about potentially attending college online or not having the full college experience, students are considering deferring for a semester or an entire academic year. Colleges have routinely accepted these requests in the past, and some elite universities, such as Harvard, Princeton and MIT, have traditionally encouraged it.

Colleges will clearly face financial difficulty if too many students want to wait out the pandemic, but insiders believe that colleges will likely grant deferral requests because schools are going to want as many students to commit as possible.