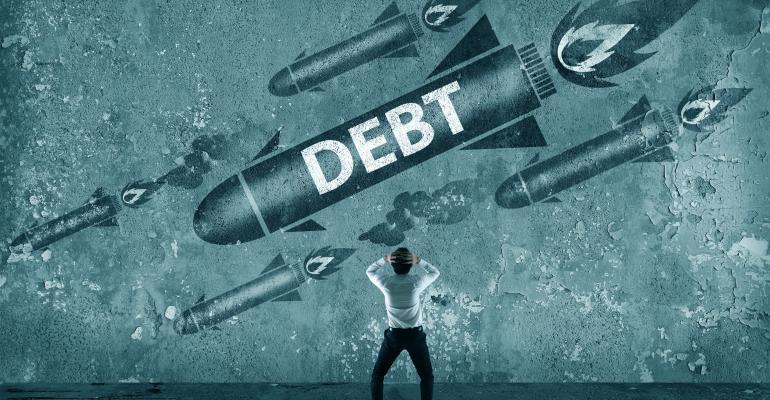 CMBS special servicers are bracing for the worst crash of their careers.

(Bloomberg)—Emptied out malls and hotels across the U.S. have triggered an unprecedented surge in requests for payment relief on commercial mortgage-backed securities, an early sign of a pandemic-induced real estate crisis.

Borrowers with mortgages representing almost $150 billion in CMBS, accounting for 26% of the outstanding debt, have asked about suspending payments in recent weeks, according to Fitch Ratings. Following the last financial crisis, delinquencies and foreclosures on the debt peaked at 9% in July 2011.

Special servicers -- firms assigned to handle vulnerable CMBS loans -- are bracing for the worst crash of their careers. They’re staffing up following years of downsizing to handle a wave of defaults, modification requests and other workouts, including potential foreclosures.

“Everything is happening at once,” said James Shevlin, president of CWCapital, a unit of private equity firm Fortress Investment Group and one of the largest special servicers. “It’s kind of exciting times. I mean, this is what you live for.”

A surge in residential foreclosures helped ignite the last financial crisis. Now, commercial real estate is getting hit because the economic shutdown has shuttered stores and put travel on ice.

Not all of the borrowers who have requested forbearance will be delinquent or enter foreclosure, but Fitch estimates that the $584 billion industry could near the 2011 peak as soon as the third quarter of this year.

There’s no government relief plan for commercial real estate. Bankers usually have leeway to negotiate payment plans on commercial property, but options for borrowers and lenders are limited for CMBS.

Debt transferred to special servicers from master servicers, mostly banks that handle routine payment collections, is already swelling. Unpaid principal in workouts jumped to $22 billion in April, up 56% from a month earlier, according to the data firm Trepp.

Special servicers make money by charging fees based on the unpaid principal on the loans they manage. Most are units of larger finance companies. Midland Financial, named as special servicer on approximately $200 billion of CMBS debt, is a unit of PNC Financial Services Group Inc., a Pittsburgh-based bank.

Sternlicht said during a conference call on Monday that special servicers don’t “get paid a ton money” for granting forbearance.

“Where the servicer begins to make a lot of money is when the loans default,” he said. “They have to work them out and they ultimately have to resolve the loan and sell it or take back the asset.”

“They’re at the mercy of this handful of special servicers that are run by hedge funds and, arguably, have an ulterior motive,” said Hambly, who started working for loan servicers in 1985 before switching sides to represent borrowers.

But fears about self-dealing are exaggerated, according to Fitch’s Adam Fox, whose research after the 2008 crisis concluded most special servicers abide by their obligations to protect the interests of bondholders.

“There were some concerns that servicers were pillaging the trust and picking up assets on the cheap,” he said. “We just didn’t find it.”

Hotels, which have closed across the U.S. as travelers stay home, have been the fastest to run into trouble during the pandemic. More than 20% of CMBS lodging loans were as much as 30 days late in April, up from 1.5% in March, according to CRE Finance Council, an industry trade group. Retail debt has also seen a surge of late payments in the last 30 days.

Special servicers are trying to mobilize after years of downsizing. The seven largest firms employed 385 people at the end of 2019, less than half their headcount at the peak of the last crisis, according to Fitch.

Miami-based LNR, where headcount ended last year down 40% from its 2013 level, is calling back veterans from other duties at Starwood and looking at resumes.

CWCapital, which reduced staff by almost 75% from its 2011 peak, is drafting Fortress workers from other duties and recruiting new talent, while relying on technology upgrades to help manage the incoming wave more efficiently.

“It’s going to be a very different crisis,” said Shevlin, who has been in the industry for more than 20 years.