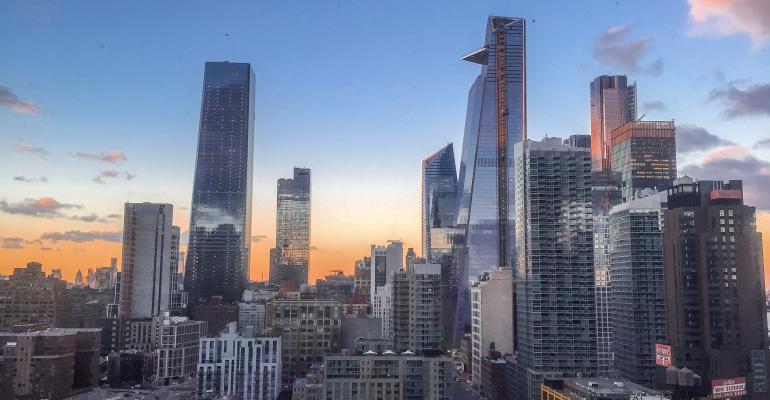 While the deal has yet to price, the CMBS financing for the building is being seen as a bold vote of confidence for office demand in a large city’s central business district, observers say.

(Bloomberg) -- In the midst of a pandemic that has pundits debating the future demand for urban office towers, a conglomerate of investment banks is currently marketing a $1.5 billion commercial mortgage-backed security backed by a new trophy high-rise tower, One Manhattan West, part of the Hudson Yards redevelopment in New York.

The transaction has already been oversubscribed in preliminary marketing, from the AAA tier all the way down to a BB tranche, according to an investor familiar with its performance. One slice rated Baa3/BBB by both Moody’s Investors Service and DBRS Morningstar, respectively, was already more than nine times covered, the investor said, citing a deal status report from the arrangers.

While the deal has yet to price, the CMBS financing for the building is being seen as a bold vote of confidence for office demand in a large city’s central business district, observers say. It also has given a shot of energy to the beleaguered $550 billion CMBS market, which has been one of the hardest hit segments of the credit markets.

“It does seem a curious time to attempt an office-property securitization in the midst of a pandemic where a cure remains still uncertain and where the near-term future demand for office space in New York City is difficult to predict with any confidence,” said Christoper Sullivan, chief investment officer of the United Nations Federal Credit Union.

“It is, of course, in other ways appealing from an issuer standpoint, as financing rates are tremendously low and investors remain drawn to opportunities offering spread to base rates,” Sullivan said.

Standing at 67 stories, One Manhattan West is the tallest and newest building in the Hudson Yards development, and it’s a “green” tower, meaning it was built to environmental standards. The CMBS is securitizing a seven-year, fixed-rate, interest-only loan.

Moody’s analysts rating the structure in a Thursday presale report noted that the building is a “premier” property that has long-term leases from strong tenants including international law firm Skadden, Arps, Slate, Meagher & Flom, accounting firm EY, and consulting firm Accenture Plc. Those three tenants account for 77% of the rent income. The National Hockey League is another major tenant.

Moreover, all of the leases extend ten years beyond the seven-year loan term, and there are no termination options at this time, according to the report.

“You have long term leases that were struck a number of years ago when the building was being constructed, and you’ve got this rent roll locked in right now,” Moody’s analyst Blair Coulson said in a telephone interview. “The quality of this rent roll gets you through the short-term concern about office properties from an economic standpoint.”

While Moody’s notes in the report that “the degree of uncertainty around our forecasts is unusually high” regarding the effects of the pandemic on office demand, their baseline view is that remote work, while becoming more prevalent, will not come at the expense of real estate holdings for large corporations.

“Your most optimal workforce with the best aggregate productivity may not be a fully remote workforce, even in certain types of jobs and industries that had some success,” said Moody’s analyst Kevin Fagan. “The reason why you haven’t seen it yet is that fundamentally all the management concerns you have are much more difficult when people are not in a centralized office. The cost of the workforce is much more than the cost of real estate.”

“Your lifeblood is your human capital. People may want the flexibility, but not at the expense of real estate,” Fagan said.

Investors also noted that office rents have held fairly firm in the Hudson Yards area. “It may also be the case that office demand will remain essentially intact post-pandemic and that there is not a secular shift underway,” said UNFCU’s Sullivan. “However, as an investor, you must remain cautious on the underlying assumptions and approach the investment with a fair degree of uncertainty.”

To contact the reporter on this story:
Adam Tempkin in New York at [email protected]