/sites/all/themes/penton_subtheme_wealthmanagement/images/logos/footer.png
Recent
Recent
The Search for Sustainable Investment Leaders
May 24, 2022
Goldman Staff Outpace Credit Suisse in Return to Office
May 24, 2022
Seven Must Reads for the CRE Industry Today (May 24, 2022)
May 23, 2022
Michael Kitces' #FASuccess Podcast: Joe Pitzl on the Future of Financial Advisor Career Tracks
May 23, 2022
Featured
The 10 Best and 10 Worst States in Which to Retire in 2021
Jul 15, 2021
Poll: 15 Classic Books on Investing and the Markets
Apr 03, 2020
Fifteen Must-Listen Business Podcasts for Advisors
Aug 14, 2020
Celebrity Estates: Jay Leno and Planning for Classic Car Collections
Feb 22, 2022
Coronavirus
brought to you by 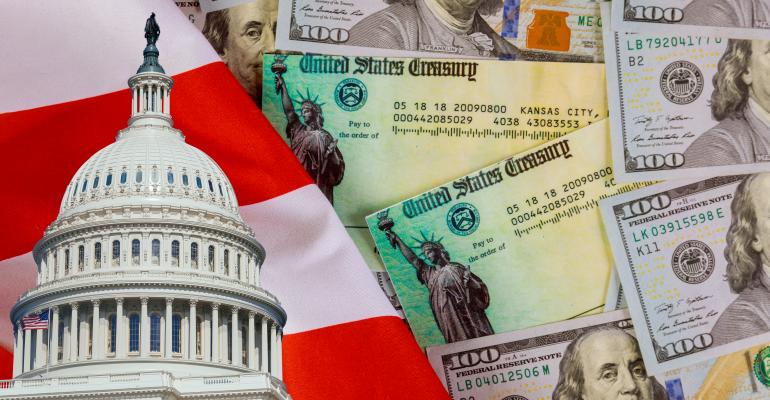 Industry groups have responded to a proposed bill that will help distressed CMBS borrowers remain current on their loans.

Congressional Representatives Van Taylor (R-Texas), Al Lawson (D-Fla.), and Andy Barr (R-Ky.) have officially introduced into Congress H.R.7809, which would direct the Secretary of the Treasury to establish a HOPE Preferred Equity Facility to guarantee certain financial investments of commercial borrowers affected by COVID-19, and for other purposes. The proposed legislation has been referred to the House Committee on Financial Services for review. The bill was sponsored by Taylor and co-sponsored by Lawson and Barr.

According to reporting from the Wall Street Journal, "the bill would set up a government-backed funding vehicle that businesses could tap to stay current on their mortgages. It is meant in particular to help those who borrowed in the $550 billion market for mortgages that are packaged into bonds and sold to Wall Street."

Additionally, "banks would extend money to help these borrowers and the facility would provide a Treasury Department guarantee that banks are repaid. The funding would come from a $454 billion pot set aside for distressed businesses in the earlier stimulus bill," according to the WSJ's reporting.

The National Law Review published details on a draft version of the bill on July 12. It spells out criteria for how borrower eligibity would be determined as well as how financial instituions could be reimbursed by the Federal Reserve when participating.

The bill comes at a time when delinquencies on CMBS loans have rapidly mounted and borrowers have found it challenging to navigate their relief options from lenders. The hotel and retail industries, crippled by COVID-19 shutdowns, have been particularly affected. Delinquency rates on CMBS loans secured by hospitality and retail properties soared to 24.3 percent and 18.07 percent, respectively, according to the most recent data from Trepp.

Industry trade groups were quick to react to the proposed bill.

The CRE Finance Council voiced tepid support for the measure, but also said it needed refinement.

“We are deeply appreciative of the efforts that Rep. Taylor and Rep. Lawson are making to support commercial real estate – an industry that has been consistently overlooked in COVID government relief efforts and facilities,” said Lisa Pendergast, executive director of CREFC. “Like many, the hotel and retail industries are in a dire situation and need immediate and specific policy attention in order to sustain the thousands of jobs and investment dollars that are a vital thread in the fabric of our U.S. economy. Recent legislation, including the CARES Act, HEROES Act, and HEALS Act does not address the commercial real estate industry's primary concerns. Federal Reserve facilities support the flow of credit to households and businesses, but unfortunately not the asset-backed businesses that support and create jobs.”

Meanwhile, the International Council of Shopping Centers (ICSC) voiced its approval for the HOPE Act.

“We applaud Congressmen Van Taylor (R-TX), Al Lawson (D-FL) and Andy Barr (R-KY) for outstanding leadership in introducing the Helping Open Properties Endeavor (HOPE) Act, which is the type of solution needed to help prevent widespread foreclosures that could destabilize the US economy. As our nation continues to combat the virus, the bill would provide temporary relief plan for commercial real estate (CRE) borrowers," ICSC President and CEO Tom McGee said in a statement.

.The American Hotel & Lodging Association (AHLA) also expressed its support for the bill.

“With record low travel demand, thousands of hotels can’t afford to pay their commercial mortgages and are facing foreclosure and the harsh reality of having to close their doors permanently," AHLA President and CEO Chip Rogers said in a statement. "Tens of thousands of employees are faced with losing their jobs permanently. Other small businesses that depend on these hotels to drive local tourism and economic activity will likely face a similar fate. Before the pandemic, one out of every 10 jobs in the U.S. depended on travel and tourism. It’s imperative we get back to those levels once this crisis is behind us.... The hotel industry supports The HOPE Act to give struggling small business hotels an opportunity to keep their doors open and avoid foreclosure. We urge Congress to quickly pass this legislation to keep hotels open for business and position America’s tourism industry to survive and recover when the public health crisis subsides.”