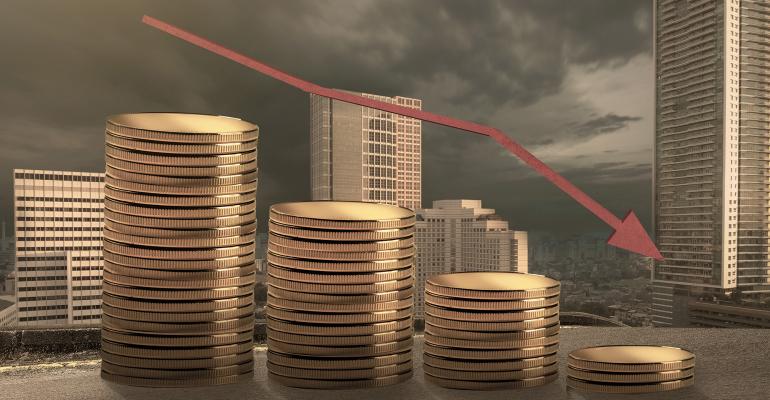 Higher interest rates and lower transaction volume has taken a toll on new CMBS issuance. Issuance on private label CMBS (non-agency backed loans) dropped 36.5 percent in 2022 to $70.2 billion, which is the lowest level since 2018, according to Green Street / Commercial Mortgage Alert. Issuance is likely to decline further in the coming year. “Across the board, issuance is going to be challenged this year,” says Rob Jordan, head of CMBS product at Trepp, a provider of data, insights, and technology solutions to the structured finance, commercial real estate and banking sectors. Much of that challenge stems from the huge move in interest rates, which is impacting underwriting, valuations and loan amounts, as well as bid-ask spreads on both the bond and loan side.

Yet some segments of the CMBS market are faring better than others with conduits that have been hardest hit. Conduits have been on a downward trajectory for the past four years, dropping from $50.5 billion in 2019 to $24.0 billion last year. Meanwhile, single asset, single borrower (SASB) deals have emerged as a more dominant segment of the market. Although SASB issuance dropped from a record high of $79.1 billion in 2021, the sector posted strong numbers with $46.2 billion in new loans last year, according to Commercial Mortgage Alert.

“Borrowers appear to be settling into the new reality of higher commercial mortgage rates and the reduced leverage from lenders,” notes Steven Mehr, a real estate partner and member of the CMBS loan origination team in the Salt Lake City office of Ballard Spahr. That being said, there are a number of factors that will continue to weigh on CMBS issuance and transaction activity generally in the coming year. Mehr expects SASB volume to decrease in 2023 as increases in 2022 were driven by a significant number of transactions resulting from borrowers taking advantage of the lower interest rates and fear of rate increases. “However, the market will likely provide SASB opportunities for well-positioned single borrowers as we anticipate that capital will be made available for such transactions,” he adds.

Related: Securing Office Financing Will Be More Difficult in 2023

SASB is likely to generate the strongest issuance in the coming year, in part because of its more straightforward structure. “They are much easier for the crossover buyer to come in and look at SASB and get their hands around it and understand the deal structures,” says Jordan. Conduit loans have struggled with competition from balance-sheet lenders prior to the rate-hiking cycle that began in 2022. However, the securitized market tends to be a bit more agile than balance sheet lenders, many of whom have pulled back in the current market, notes Jordan. “So, it could be a situation where conduits actually find a window of opportunity to come back, but time will tell,” he says.

CRE-CLO loans that have risen in popularity as a financing solution for transitional multifamily assets in particular also have relatively well under market pressures. CRE-CLO lending dropped from a record high of $45.4 billion but remained robust at $30.3 billion – 58 percent higher than the 2019 issuance level, according to Green Street CMA.

Higher interest rates are squeezing debt service coverage ratios (DSCRs) and putting added pressure on underwriting. “The challenge when your interest goes up 2 percent is to make sure you have a positive debt service coverage to start off with,” says Darrell Wheeler, vice president and senior credit officer, research at Moody’s Investors Service. Lenders typically require that loans have more cashflow than obligations on day one, he adds.

As interest rates have moved up, DSCRs that used to be over 2x on new issuance have moved closer to 1.2x, according to Moody’s 2023 Outlook on CMBS and CRE-CLOs. For borrowers that are refinancing from a mortgage rate that was previously 3 to 5 percent and now are being asked to pay 5 to 7 percent, they’re not going to have as much buffer over cash flows, notes Wheeler. “We have seen several properties that couldn’t refinance with 1.2x where the borrower had to come out of pocket with new equity,” he adds.

Lower DSCRs will make it difficult to underwrite new loans and weigh on issuance volume. Another concern is stress emerging among CMBS loans set to mature in 2023 and 2024. Although that volume is much lower than existed back in 2017 and 2018, it is not inconsequential. According to Trepp’s analysis, CMBS has $15 billion in loans maturing in 2023 and another $31 billion maturing in 2024. DBRS Morningstar is estimating a higher volume of loan maturities in 2023 and 2024 at roughly $75 billion. Under its baseline scenario, DBRS is predicting that about 66 percent of maturities will pay off in 2023 and in the mid-50 percent range in 2024. However, under its stressed scenario modeling, the payoff rates could drop to the mid-40 percent range in 2023 and roughly 35 percent in 2024.

Higher interest rates will take a bigger bite out of cash flows, and are likely to push more CMBS loans into default. According to Moody’s, fourth quarter data shows that the minimum debt yield on loan maturities getting refinanced was 7.8 percent. That suggests that a target debt yield hurdle for loans maturing in 2023 is about 8 percent. “When you start to do the math, there are probably $6 billion to $7 billion of maturities next year that we’re concerned about,” says Wheeler. Retail and office in particular face the biggest risk exposure to default, each of which has more than $2 billion in loans with less than 8 percent debt yield, according to Moody’s.

Delinquencies have already started to tick higher and many expect delinquencies to climb through 2023. After reaching a post-COVID trough of 2.92 percent in September 2022, the rate has inched up for three consecutive months to 3.04 percent in December, according to Trepp. Retail reported the highest delinquency rate at 6.97 percent followed by lodging at 4.40 percent.

Inherently, there is a lot of uncertainty in the economy and the CRE market. That uncertainty will create potential problems for near-term maturities. Looking at the industry more broadly, Trepp has calculated that there is $447.42 billion of commercial mortgages coming due in 2023 and another $486.24 billion in 2024. “Borrowers are going to have to find other pockets of capital to come in and help fill those refinance gaps that exist from traditional lenders,” says Jordan. Preferred equity and mezzanine lenders in particular are going to have ample opportunities to provide capital over the next two years, he adds.