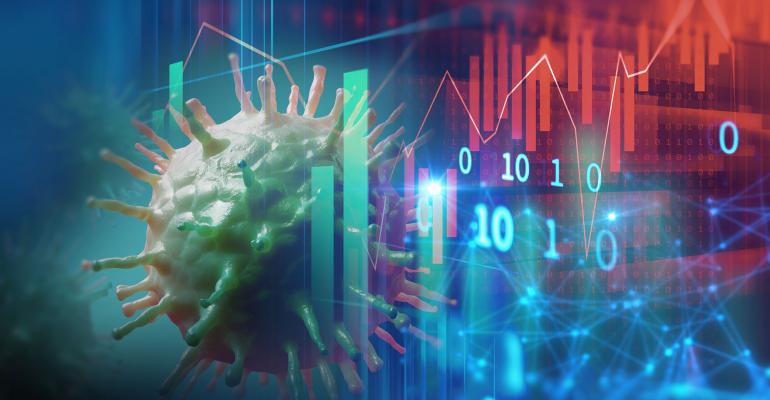 Delinquencies will rise, but not right away. Special servicers and master servicers will be busy in the coming months.

The calendar has turned to April after a seemingly endless month of March. With that it’s the first day that monthly rents and mortgage payments are coming due after a period in which a huge swath of businesses has been shut down. The effects of that will creep into the CMBS sector in the coming weeks and months as origination volumes dip and existing loans are placed into special servicing. And while rates will not move up right away, experts expect delinquencies to start ticking up as soon as May.

On the CMBS origination side, there has been increased volatility in the past few weeks, with spreads initially widening out rapidly. Other lenders are continuing to be selectively active in the market, however.

As of two weeks ago, “banks and insurers were still originating loans, although at lower leverage and with higher spreads than just a few weeks ago, and mostly limited to top sponsors, properties and markets,” says Steve Jellinek, vice president, Morningstar Credit Ratings. “I don’t know if it’s a complete halt, but things have certainly slowed down in CMBS. CMBS deals are waiting to get priced, but they’re being held up as sellers and buyers try figure out pricing.”

“Banks and life companies are lending. They have capital,” Fink says. “They are being careful about what they are taking on, but they are still lending. … The CMBS market for right now is not making loans because those loans rely on there being an outlet for the securities.”

In the secondary CMBS market, spreads have moved considerably in recent weeks according to Trepp.

“From a week-over-week basis through Thursday, CMBX 6-13 AAA spreads tightened between two and 19 basis points. CMBX BBB- for those subseries widened between 194 and 227 basis points,” according to a Trepp’s weekly write-up. “The sell-off was the most pronounced on Monday, as CMBX BBB- spreads jumped by 185 to 278 basis points in a single session—marking it one of the worst widening sessions the sector has seen since the start of the COVID-19 crisis.”

Borrowers with maturing loans that were on the verge of refinancing have been thrown into limbo by the market volatility.

According to Fitch, nearly $5 billion of non-defeased loans within the Fitch-rated U.S. CMBS 2.0 conduit and Freddie Mac universe are scheduled to mature through the end of 2020. The bulk ($4.3 billion) are set to mature in the second half of the year. There is about $707 million that is set to mature during the next three months. Even amid that, the bulk ($152 million and $484 million, respectively) comes due in May and June. By property type, retail leads the way at $382 million, followed by multifamily at $107 million.

For now, experts expect that some lenders will provide short-term extensions to allow time for markets to calm and for borrowers to assess options.

“Less risky assets might see greater availability of capital for refinance, such as those on multifamily, self-storage and industrial properties,” Morningstar’s Jellinek says. “Better performing, less risky assets could potentially get refinancing from banks and insurance companies.”

Matthew Halpern, vice president and senior credit officer with Moody’s, says it’s too early to be able to generalize about how the market will deal with those takeout situations.

“Even in times when the market is not under stress, borrowers may receive short-term extensions to get refinancing in place,” Halpern says. “Extensions may happen for near-term maturing loans unable to refinance. But I don’t think there’s a broad stroke answer.”

Joseph Baksic, an associate managing director with Moody’s added, “We might observe increased differentiation based on borrower strength and/or reserve structure. If you are a rated sponsor, the necessity to find take-out financing is a little less acute, given your existing liquidity situation.”

One measure that’s given confidence to a section of the market is the decision by the Federal Reserve to bring agency-backed CMBS onto its balance sheet as a revival of the 2008-era Term Asset-Backed Securities Loan Facility (TALF). That will keep capital flowing for the multifamily sector at least.

“I think that’s a positive,” Trepp’s Fink says. “It’s part of their mission to maintain that stability on the market [and] liquidity to keep the wheels of the economy moving.”

Meanwhile, sources say that industry groups like the Real Estate Roundtable and the Commercial Real Estate Finance Council have been pushing for the Fed to make private-label CMBS eligible for TALF as well, as it did a decade ago. Jellinek pointed out that “The Fed did say that ‘the feasibility of adding other asset classes to the facility will be considered in the future.’”

In the long-term, as the markets stabilize Fink expects these programs to go away as they did after the last crisis. “Trepp was part of that program as collateral manager,” he says. “It came and went in about 18 months. … Once people saw that the bonds could be sold, the market took over.”

Unsurprisingly, the effects will vary by sector with hotels and retail properties feeling the sharpest pullbacks due to nationwide shelter-in-place and stay-at-home orders. Specifically,

overall hotel loans make up about 15 percent of non-agency CMBS, according to Fitch Ratings. Single-asset single borrower (SASB)  hotel loans amount to $34 billion outstanding and conduit hotel loans come to $49 billion. Fitch analysts expect SASB hotel loans to be able to get through a six-month disruption to the sector, while hotel conduit loans are more likely to experience defaults.

Rating agencies including Fitch and Moody’s Investors Service have already signaled to clients and the market how they plan to review the CMBS market and where they see potential trouble spots.

Fitch “is prioritizing CMBS transactions based on their relative vulnerability to potential negative rating actions, and has already placed those transactions most exposed to risks from the pandemic on Rating Watch Negative.” It is especially attuned to the hotel and retail sectors, although Fitch expects adverse effects for nearly all commercial real estate property types.

“We are taking a measured approach in terms of potential impacts…. We are diligently looking at a variety of scenarios,” says Keith Banhazl, managing director, structured finance for Moody’s. “CMBS does have structures—extensions, modifications, forbearance and institutional sponsorship for certain loans. Broadly, we are taking a measured approach, also with a keen focus on loans that have already been under stress in recent years due to declining cashflows.”

Moody’s Investor Service has identified conduit CMBS issued from 2010 through 2014 with exposure to those sectors as “highly vulnerable to potential changes in credit quality.” Sectors that fell into a “moderate vulnerability” category included commercial real estate collateralized loan obligations and conduit CMBS loans for commercial real estate sectors aside from hotel and retail. Meanwhile it categorized RMBS backed by single-family rentals as “low vulnerability.”

Yet even in the hotel and retail sectors, it might take a number of months for delinquencies to move higher. Analysts from Moody’s noted that after previous shocks, including 9/11 and the 2008 financial crisis, it took eight to 12 months before delinquencies rose appreciably. Overall “it took about eight months for hotel defaults to rise by 1 percent, before accelerating quickly and ultimately peaking at a 17 percent delinquency rate 28 months later,” according to a Moody’s report.

Moody’s analysts noted that the relative extreme nature of the current shock might speed up that timeline a bit, but that buffers like cash reserves and extensions from special servicers would mean that delinquencies will not shoot up overnight. It also remains to be seen how comprehensive government aid will be, which could mute the economic impacts of the COVID-19 crisis.

Long term, however, experts think the financial markets are likely to weather the current storm.

“The markets aren’t broken right now,” Fink says. “They are dealing with an externality that they weren’t ready for. They were caught flat-footed. But now people are adjusting as quickly as they can. … The good news is that the events of 2009 and 2010 are still in people’s immediate memories. So, there’s a bit of ‘Hey, this is what we did the last time. The problem seems similar. Let’s do it again.’”