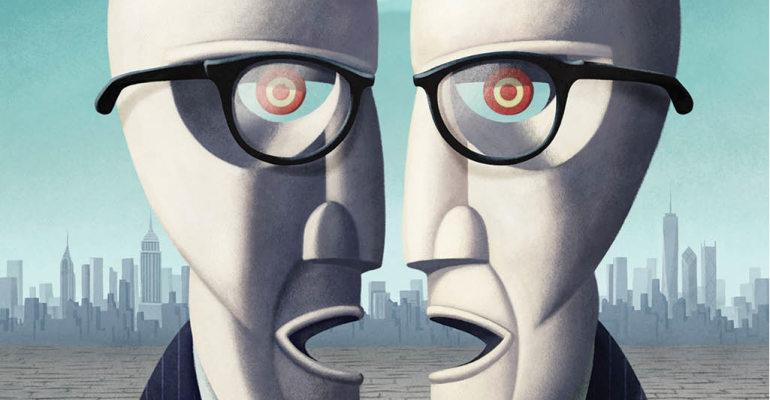 When Advisors Have Advisors

Mutual advantages accrue when advisors enter into fee relationships with other advisors.&nbsp; &nbsp;

Well, no. “Personally, if I were the client of an advisor who invested elsewhere, I would be like ‘WTF?’” says Joshua Brown, a New York City-based financial advisor for Ritholtz Wealth Management. I talked to over 30 advisors for this story, and Brown’s opinion is typical—if a bit more abbreviated—of the responses my question drew. Brown is like most advisors in that he eats his own cooking: his personal investments mirror the model portfolios he designs for his clients.

And yet, is this really the most sensible financial move? Lawyers don’t represent themselves. It’s a well-known maxim that a lawyer who represents himself has a fool for a client. Likewise, physicians are discouraged from diagnosing and treating themselves. In both cases, it’s just too easy for denial and emotion to cloud judgment. Why should it be any different for financial advisors? Every reason that financial advisors trot out to justify to clients the value of hiring a professional FA applies to the
advisor, as well.

But while rare, it’s not impossible to find advisors who are open and unapologetic about the advantages they receive by entering into fee relationships with other FAs. Let’s meet a few of them. 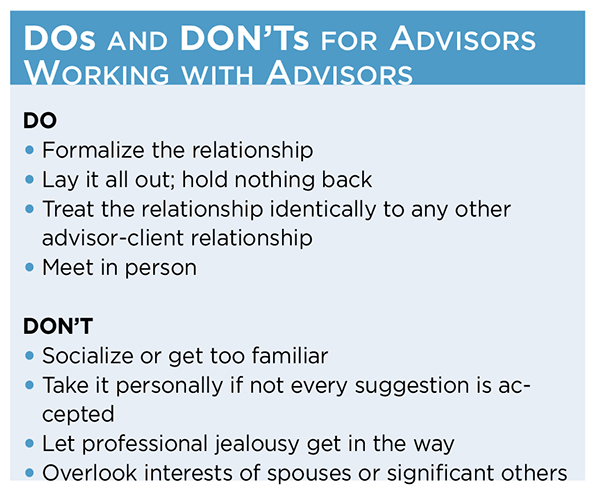 Tom Weilert and Charlie Prothro, both Texas-based WMAs, are affiliated with Northwestern Mutual. Weilert works out of the Dallas office; Prothro works in Wichita Falls. For over 20 years, Tom and DeAnna Weilert have worked with Prothro on a fee basis to consult on the Weilert family comprehensive retirement strategy, which includes investments.

“Even professional advisors have emotions,” says Weilert. “We are human and not exempt from having blind spots. What Charlie does is analyze our holistic plan, reveal potential weaknesses and, most importantly, offer perspective,” he adds. Weilert accepts that he’s overly optimistic. “I often don’t weigh the risks as much as I should,” he admits. “That’s not at all the way I behave with my clients. So, this relationship with Charlie represents a correction to [excess] optimism.”

One of the features of their relationship is that the consultations are in person. “There’s a big difference between writing a plan down and sitting down with another expert and actually trying to explain it,” according to Prothro. The drive time before and after each consultation offers great opportunities to reflect on the challenges and proposed strategies. “I want to take clients out of their comfort zone so they can see their own worlds better,” he says. “It makes it much easier to challenge assumptions. Sometimes the best conversation happens when I walk the client from my conference room to their car.”

Weilert credits Prothro with providing a fact-based framework for big financial decisions. For example, as their children entered high school, the Weilerts considered moving closer to their children’s schools. “I wasn’t sure the numbers would work out,” Weilert says. “Charlie took the financials apart and showed me clearly that we could make the move while preserving our over-arching goal of debt freedom. I can say I would not have been able to make the move without Charlie walking me through the options.”

“Every decision is always a balance,” Prothro responds. The success of Weilert and Prothro’s relationship depends on a formula they both use with their own clients. They have a fee agreement and the act of writing checks and mailing them ratifies the value the relationship continues to provide over time. Prothro and Weilert have been consulting each other for over 20 years.

Prothro notes that working with another experienced FA sharpens the saw for both. “I know I’m a more effective advisor as a result of this relationship. Just the experience of sitting in the client seat and going through the process with another expert helps me be more empathetic,” he explains.

When he started as a financial advisor, Jerry E. Linebaugh II, the founder of JLine Financial in Baton Rouge, La., was taught that he could be all things to all clients. But experience soon persuaded him that this rule didn’t apply to his own family’s specialized investment needs. Soon, he was paying fees to other advisors for help. It wasn’t a big leap to conclude that what was best for his own family was, therefore, best for the families of his clients. Now, Linebaugh doesn’t hesitate to refer his clients to other advisors when a client situation requires more expertise than he himself has. That’s not an admission of limitation, he says, but a sign of confidence that clients reward.

Linebaugh has long-term fee relationships with a number of financial advisors who complement his own expertise. For example, he recently paid a strategic partner to update an estate detail in Linebaugh’s will. “Now, I think I’m perfectly capable of making that update, but I’m absolutely sure my expert is,” he adds. “It’s too easy for advisors to have their eyes clouded by success and start believing their own press.”

Linebaugh’s personal financial situation has also benefited from his willingness to pay other FAs on specific issues. For example, at one point Linebaugh—committed to owning hard assets—had real estate in his portfolio. The assets performed well but were very time consuming to manage. At a recent meeting, the FA Linebaugh consulted suggested that non-traded REITS might serve as a better vehicle to satisfy Linebaugh’s desire to own hard assets. Two benefits were immediate. First, another of Linebaugh’s investment goals is to be less correlated with the market; non-traded REITS served this purpose. Second, owning non-traded REITs instead of individual properties freed up enormous amounts of time that he could then devote to his clients.

Not all such relationships are reciprocal. Kyle O’Dell, a principal with Secure Wealth Strategies in Englewood, CO, is accustomed to having other FAs reach out to him for assistance in designing cases on their own behalf as well as for their clients. He himself has yet to identify a need for such an advisory relationship himself.

O’Dell recalled a recent example in which an FA who is associated with a national financial services company asked him for a fee-basis consultation. This FA, who asked not to be named, could represent to his clients only the products and services available through the firm. “It’s a good company with sound products, but the FA saw that I was able to bring some tax planning strategies to the table that he did not have access to,” O’Dell says. The FA, who was approaching retirement age, had been managing his own investments and was doing well, yet he found O’Dell’s investment strategy and the tools he provided very appealing. The FA moved a good portion of his assets under O’Dell’s management, according to O’Dell.

It’s not always easy for advisors to lean on other advisors. Professional jealousy sometimes gets in the way, especially if the leaned-on advisor is considerably more successful than the advisor seeking help. Yet logic suggests there’s an advantage to leaning on an advisor who has expertise that you don’t.