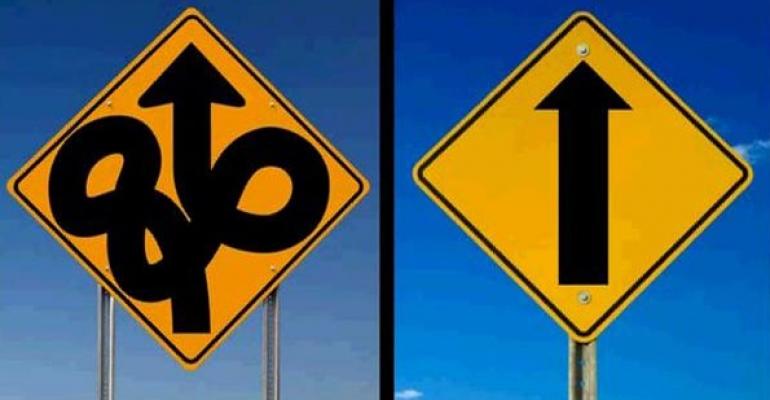 Tales From The Far Side

Wading through complexity to find simplicity

Think of checkers as being on this side of complexity as opposed to chess on the far side, meaning harder to get to.

As applied to the world of trustees and beneficiaries: “He’s always been a spendthrift, so we’d best decline his current request for money out of hand,” versus “What’s the best decision we can make that will contribute to his growth and maturity?”

Back to the quote.  Which Holmes said it—the Junior or the Senior?  Holmes Jr. was an eminent Justice of the U.S. Supreme Court.  And Holmes Sr. was one of our major poets.

At different times, the simplicity/complexity statement has been attributed to one or the other.  And, although a believer in accuracy everywhere else, I like not knowing which of these outstanding men actually uttered it.

I feel that way because—brace yourself—Law and Poetry are the principal and recurring ingredients of the trustee’s profession.

The law (in the sense of  “compliance”) defines the boundaries so we don’t go “outside the box.”  But it’s poetry (after all, trusts are creatures of equity) that allows us to expand the box to, as Mark Twain said, “Do the right thing.  It will gratify some people and astonish the rest.”

Early in his book, In Pursuit of Elegance, Matt May lists why it’s important to understand and pursue complexity on the far side of simplicity.  Among his reasons: “Because we need some way to consistently replace value-destroying complexity with value-creating simplicity.”

It’s easy for a trustee to get caught up in complexities.  And the enticing solution—the way to avoid that swamp—is often a simple one.  Unfortunately, it’s a solution of the sort found “on this side of complexity”— which is the wrong side—and comparable to the Procrustean bed.

Recall your Greek mythology: Procrustes offers his iron bed to weary travelers. And if they’re too tall or too short to fit the bed?  He either stretches them out or cuts off their legs to make them fit.  Similarly, some trustees enforce uniformity according to arbitrary standards.

Let’s compare that to the “other side of complexity” solutions crafted by poetic trustees.

One of the stories in our 2012 book TrustWorthy  is “We All Felt Like Godparents.” For years, a beneficiary granddaughter and her husband have been trying to conceive children, without success.  She comes to the trust to ask for funding of in vitro fertilization.

The beneficiary’s grandmother had created the trust for the benefit of her daughter and grandchildren.  The standard for allowing distributions to grandchildren is “maintenance, education and general welfare,” without mention of medical or health.

Listen as the institutional trustee works her way through complexity and reaches the happier—for all concerned—land of “far side” simplicity.

“Our analysis covered many angles.  Would in vitro fertilization come under maintenance and general welfare?  Who would object to an accounting of such a distribution? What would the grandmother have wanted?  Were there ways of benefitting the family that weren’t contemplated when the trust was originally created?  What’s the benefit to the family for making such a distribution and what is the potential risk to the trustee?”

The distribution is made.  When the child is born, the trustees all “feel like godparents.”

An institutional trust officer told us another story, “James’s Thirst for Education.” James, a beneficiary, has a couple of co-trustees: one a family member, the other a trust company.

James has a long and very negative history with his family trustee.  In his late 30s, James has been living in Paris and, according to the family trustee, is always thinking of very creative ways to get money from his trust.

The family trustee doesn’t like or trust James, and James knows it. So when James approaches his trustees to ask for money to go back to school to get a graduate degree from the Sorbonne to become a teacher, the family trustee is unable to conceive of James having changed.

His reaction: “Absolutely not! How do we know he is really going to use the money for that purpose?”

The institutional trust officer has a different take: “Because I have not known James as long as the family trustee has, there isn’t a negative history between James and me.  I believe James is serious about the endeavor.”

The trustees and James negotiate a plan that includes accountability on James’ part.  The trustees make the distribution.  James returns to school and indeed shows seriousness about his education.  He comes through.

So, Mr. and Ms. Trustee, hats off to you for remembering that your compliance handbook will benefit from the addition of poetic insight.

Wading through complexity with the intent of finding simplicity—typically it’s not quick.  But the reward for doing so is that you and your beneficiaries will avoid winding up in a comic strip.  What comic strip is that?  You remember—“The Far Side.”