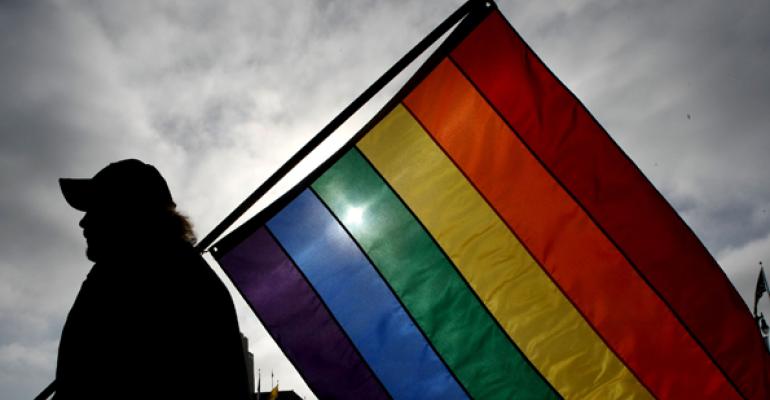 In the year since the U.S. Supreme Court struck down a key provision of the Defense of Marriage Act, the legal, tax and insurance landscape for same-sex marriages has shifted.  Twenty states now allow same-sex marriages, with five major court rulings legalizing gay marriages in New Jersey, New Mexico, Oregon, Pennsylvania and, just this week, Indiana and Utah (the decision has been stayed pending appeal).

The LGBT community offers a good client base for advisors. Same-sex couples earn $8,000 more per year compared to heterosexual couples ($94,000 versus $86,000), according to a study by UCLA’s William Institute. But 83 percent of LGBT investors say they don’t fully understand the impact of federal and state laws on same-sex marriages, while less than half (47 percent) have reached out for professional guidance on these issues, according to a recent Wells Fargo survey released Thursday.

This disconnect offers a chance for knowledgeable financial advisors to step in, as 53 percent of LGBT investors say they would value advice on wills and estate plans, while over 30 percent say they’d value professional advice around tax and retirement issues.

For Kimberly Griego-Kiel of Santa Fe, N.M.-based Horizons Sustainable Financial Services, the changes have impacted her both personally and professionally. A lesbian who participated in the class action lawsuit that eventually overturned New Mexico’s marriage laws, Griego-Kiel says the media attention has helped business.

“We had a great response from our clients, both gay and straight. They were very supportive,” Griego-Kiel says. With both the federal and local changes to marriage laws, she’s seeing more and more discussions around the impacts, even if this awareness isn’t yet translating into a boom in new clients.

“We use social media primarily and share information about successful marriage cases around the country to show that we are LGBT positive,” Griego-Kiel says. The firm takes to Twitter, Facebook and Linkedin to alert clients and followers when major developments—including key rulings nationwide—occur. Overall, the firm gained one or two new LBGT clients in the past year, but Griego-Kiel expects that to gradually increase.

“As marriage for same-sex couples becomes more prevalent, we're going to see it become easier to work with these clients,” she says. Wells Fargo’s survey of 875 LGBT investors found 61 percent want to be married now or sometime in the future.

“But advisors really need to do their research—talk to other advisors and tax professionals,” Griego-Kiel recommends. About 67 percent of LGBT investors in Wells Fargo’s study said they preferred working with advisors and financial professionals with specific training on issues facing gay couples.

For Indianapolis, Ind.-based Bedel Financial Consulting, the Court’s ruling became an important topic to discussion for clients with same sex partners, says firm president Elaine Bedel. “We discussed the financial impact of getting married on income tax, estate tax, and benefit planning.  It is not always to the couples benefit.  They needed to make the emotional decision, but we needed to provide the financial impact,” she says, noting the firm has brought on 2-3 new LGBT clients in the past year.

Indiana is the latest state in which a federal judge struck down the state's ban on same-sex marriage, a ruling that surprised Bedel. "Most would have guessed Indiana to be much later to the party!" Bedel says lots of couples have already gotten married, which means big changes for their financial planning needs. "While there is talk by some of an appeal, I don’t think it will gain much traction."

To get up to speed on the nuances around the new legal and planning implications, Bedel says she attended two seminars on this topic provided by law firms. “The impact of the decision on existing laws and the implication in the state of Indiana where same sex marriage is not recognized—this is a complicating factor.”

Even across the border, advisors are seeing increased opportunities to serve clients. Roughly 15 percent of Ontario-based Northland Wealth Management’s new clients within the past year have been part of the LGBT community.

“In large part the ruling did not directly affect our business per say, rather it provided yet another opportunity to work closely with our clients on their planning needs,” says CEO Arthur Salzer. “As with any client, needs and realities change over time and this was simply another area where we needed to address change where applicable.”

For his clients, the single largest issue at play was around the declaration as a spouse/partner in the legal context, Salzer says, adding he found it necessary to reach out to other specialists in the community, as well as confirm findings against the legislation itself.  “With a lot of focus in the changes in legislation, it was fairly easy to source information, however paramount to validate the information as correct.”

Based in Dallas, Lee Financial’s director of planning and compliance officer Dusty Wallace says Texas’ conservative stance on the issue means the Supreme Court’s ruling has had little impact on business. “We have not seen our LGBT clients rushing out to states where gay marriage is allowed to get married and return to Texas based on the recent ruling.”

And yet the firm is still brushing up on the issues and new complexities, reaching out through relationships with CPAs and estate attorneys who work with several LGBT clients.  Wallace says the firm’s advisors also have attended various education courses offered through the local Financial Planning Association and Estate Planning Council chapters and read several whitepapers and articles published on the topic.

Even if advisors don’t yet have any LGBT clients, similar planning issues may crop up for straight clients too, says Terry Simon, managing director for North Wales, Penn.-based United Capital Private Wealth Counseling. “This [LGBT] planning is unique in some respects, but we also have client couples who meet in later life and do not marry, which often puts them in the same position.”