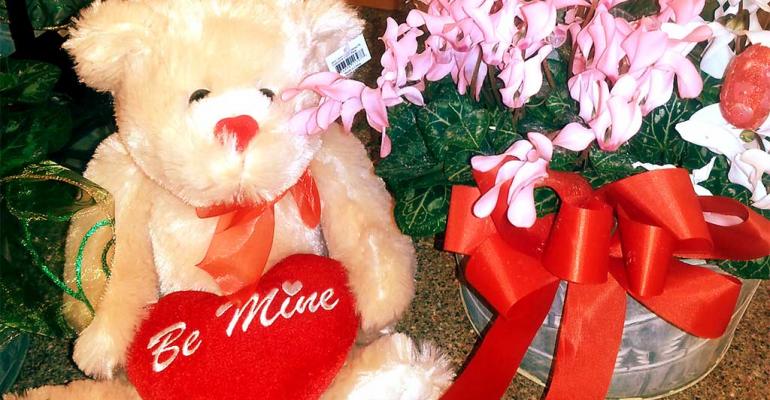 Love Hurts: A Financial Advisor Breaks up a Romance Scam

Sometimes acting as a fiduciary means risking the loss of a client.

It was late afternoon when Melissa Weisz, a wealth advisor with RegentAtlantic, received an urgent email from a long-standing client. The client, recently divorced, requested an oddly specific cash transfer of over $40,000 from a managed account to a personal checking account.

The policy at RegentAtlantic, a New York-based wealth management firm with $5 billion under management, is to verbally confirm large cash transactions with the client. Weisz asked her client why she so urgently needed such a large amount of cash, and in such a peculiarly specific amount. Gloria (not her real name) got angry and initially refused to provide an explanation. Weisz was patient but persistent, aware that there was a possibility if she pushed too hard, Gloria might close her account and take her business elsewhere.

Gloria, the advisor soon discovered, was in a romantic relationship with a man, but a man she knew only through emails and texts. Weisz immediately suspected her client was the target of a “romance scam.” A feature of such fraud is that vulnerable victims are so emotionally blinded by the promise of companionship and love that they lose common sense and resent any interference from “outsiders” who threaten the narrative. Weisz was trespassing on perilous territory for any financial advisor. Do nothing and the client would be further exploited; interfere and risk losing the client.

I first became aware of these events while reporting an unrelated story. I reached out to “Gloria” to ask her to share what happened to her with the readers of Wealth Management. At the time, she declined. The events were too raw for her to confront. Shame, humiliation and secrecy are features of confidence scams. I let her know that when she was ready, an article describing her experience might help other victims avoid what she went through.

That argument, and the passage of time, eventually won Gloria over and she recently shared her story in the hopes that it might spare even one person from the betrayal she experienced. Her one condition was that she could stay anonymous. So in the description of these events, details such as names, locations, and amounts have been altered. None of the alterations change the contours of the story.

The Pattern of Romance Scams

The criminals behind romance scams are usually organized and can be very convincing. Working from internet cafes in places such as Eastern Europe and Nigeria, criminals troll for victims online, often targeting recently bereaved widows or divorcees who have posted on dating websites or social media. Using fake profiles often crafted to appeal to specific targets, the fraudsters will strike up a conversation and try to build rapport.

The best scammers are very patient. The man responding to Gloria’s profile on a dating website strung her along for more than half a year before asking for money. “Just getting a notification from a man liking me was a thrill,” Gloria recalls.  “I looked at his photo and thought he was cute.”

Soon they were chatting back and forth. Thomas, as the man called himself, said he was a 67-year-old transportation industry consultant working for a Fortune 500 company in Chicago. He said his wife of 30 years had passed away, and he was looking to buy a house in the city where Gloria lived.

Eventually, they took their conversations off the dating site to cell phone texts and email. The conversation became more flirtatious. Thomas professed an interest in making a life with Gloria. She was becoming increasingly enthusiastic about the relationship that was promised.

Thomas was a pro and took his time. Over the course of months, the relationship evolved from friendship to what seemed to Gloria like romance—and a chance again for a life-long partner. Along the way, Thomas sent flowers and asked first for small favors—a frequent way scammers test the victim’s trust.

Fraudsters always eventually get around to their true purpose though: separating the victim from as much money as possible. About eight months into the relationship, Thomas asked Gloria for a loan of $2,400. He was in Europe and his bank card wasn’t working. This is also a typical ploy of scammers. They often say they are traveling abroad, or in the military, or working on an oil derrick. Anything that makes it hard to communicate with them.

Gloria got a cashier’s check for $2,400 from the bank and convincingly justified why she needed to mail it to a third person. (Scammers always have an explanation for every question.) She fully expected to be repaid. Soon, he had another difficulty that required an urgent loan of $5,600. Urgency is usually another hallmark of confidence scams. Gloria mailed a cashier’s check to a travel agency he designated.

Then Thomas got greedy. He told Gloria that before he could come to meet her in person, he had to pay a customs fee to reclaim some equipment. He needed $47,772. Maybe he thought avoiding a round number made the request more realistic. When pressed, Thomas even faxed Gloria an official looking promissory note. See the Memorandum of Understanding, redacted to preserve the client’s privacy. Gloria telephoned Weisz to authorize a transfer of funds from her managed account.

The Costs of Romance Scams

In 2019, Americans lost more than $201 million to romance scams—up nearly 40% since 2018—according to the Federal Trade Commission’s Consumer Sentinel Network. The median reported loss per victim from romance scams is $2,600; for people over 70 years old, that number exceeded $10,000. More than 25,000 consumers filed a report with the FTC about romance scams in 2019. But these numbers undercount the true extent of the fraud: Estimates are that only 15% of victims ever file reports.

It’s easy for readers of these kinds of stories to think they are immune from con artists, but the truth is that when people get emotionally hooked, common sense often gets overruled. Romance scammers are skilled at exploiting their victims. The best ones take their time to build trust in small increments, imperceptibly transitioning the relationship from acquaintanceship to friendship to promises of love and partnership.

Once the fraudsters establish trust, they invariably ask the target for small sums of money—often represented as a loan. Cashier’s checks, wires, and gift cards are a favored method as payments made this way are difficult to trace and almost impossible to reverse. Scammers will come up with elaborate stories about why they need the target to send funds. They typically say they can’t access their own funds because they are out of the country, had their wallets stolen, or are hospitalized. The typical cover story is that they need the money to cover travel expenses back to the target; to pay for medical expenses; or to pay customs duties. Sometimes they claim the funds are to rescue their children from some distress. The need is always pressing. And the requests always, always escalate.

Gloria’s experience followed the established pattern. After she sent the first two payments without hesitation, the fraudster made a mistake. Had he kept his requests modest, Gloria might have been able to write many more checks without the cash request that alerted her financial advisor.

When Weisz asked her client why she needed so cash so urgently, Gloria’s impatience was palpable and out of character. Weisz understood her client resented the questions and didn’t know how far she should push. It was, after all, the client’s money, as Gloria insisted. Still, the advisor persisted. “I had real concerns,” she recalls.

Swearing her financial advisor to secrecy, Gloria eventually confided that she was in love with a man she met on a dating site and the man, a well-off international transportation industry consultant, needed $47,772 to release some equipment from customs.

“Yes, I demanded that Melissa transfer the money out of my managed account immediately,” Gloria says. “Yes, she cautioned me not to do so.” Gloria grew increasingly frustrated with her advisor. “How dare she interfere in what might be my last chance at having fun and romance again?”

Weisz asked Gloria to allow her to join her at the remitting bank before she authorized the transfer of such a large sum to a man she never met. “I couldn’t justify letting this go. As hard as she pushed me, as a fiduciary I knew I had to do everything in my power to act in my client’s best interest.”

The meeting at the bank was stressful. The bank officer expressed skepticism about the transaction. At one point, Weisz actually got the scammer on the phone. He had an answer for everything but wouldn’t provide any identification. When asked to provide a scan of his passport to authorize the transaction, he refused.

At that point, Gloria agreed to call the police. A detective arrived at the bank and quickly demonstrated that the Fortune 500 company the man claimed to work for had no record of any such employee. That was enough for Gloria to take a step back. The money stayed in Gloria’s account.

“Despite everything, I went home very upset that night,” Gloria says. “I was afraid that Thomas would feel betrayed. I even sent him a Valentine’s Day card at the mailing address I had for him.” The returned card was stamped “delivery attempted; addressee not known.”

“[My advisor] saved me,” Gloria says. “At the time, I felt she was ruining what I thought was a real relationship. But now I praise God that she had the courage to say, ‘I don’t want this to happen to you.’”  Going forward, Gloria has learned to be more vigilant.  “I hope this article educates advisors about the risks romance scams pose to their clients,” she says.

Gloria lost about $10,000 in the scam. The good news, if there is any, is that she was protected from certainly losing more. Moreover, thanks partly to the good services of her financial advisor over the years, the amount she did lose would not materially affect her financial security. “I ended up blocking the man and reporting him to the dating site,” says. “Months later, I saw a profile with the same photos, only this time he knocked six years off his age.”

This story is an object lesson about slowing down and being a first-line of defense for clients, keeping them from making rash decisions that often aren’t in their own best interest.

“All advisors are committed to quick service,” Weisz concludes. “But speed can get in the way. Slowing down, and asking the right questions, is sometimes in the best interests of the client,” she says.

How Advisors Can Protect Clients from Romance Scams

Advisors can be a front-line defense for their clients. By paying close attention, advisors may be able to identify many preventable abuses including romance scams, elder fraud, and other harmful activities.  For romance scams, advisors should be alert to irregular cash transactions from the client and:

Memorandum of Understanding from a Scammer 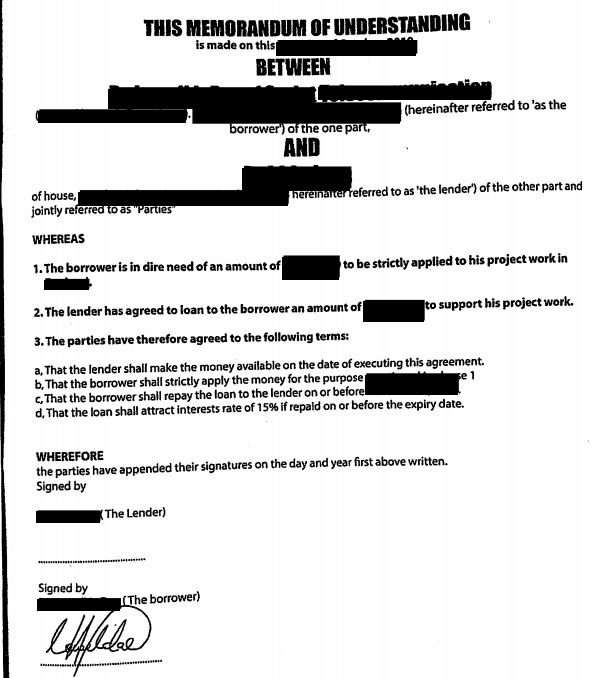 When challenged, the scammer faxed this memorandum of understanding or promissory note to memorialize theft in the guise of a loan. A clue that the note is not from a native American English speaker may be found on line 3d: the use of the term “expiry” is in the British style to mean “expiration.” This clue may situate the scammer in Nigeria or another African country where British style English is practiced. The document has been redacted to preserve the privacy of the client.