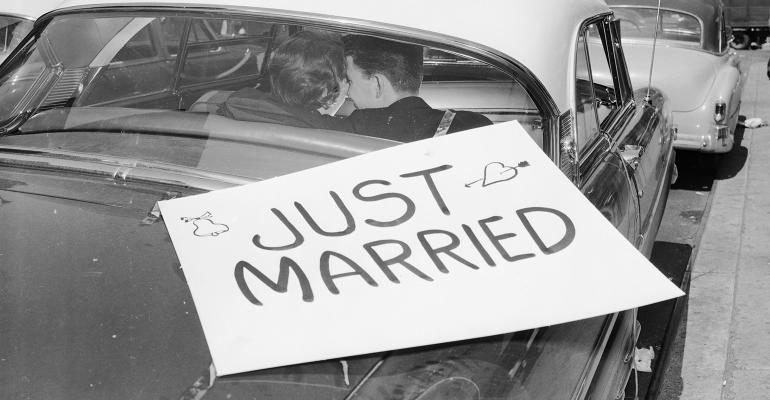 How to Talk to Clients About Money and Marriage

Talking to clients about their personal relationships may be awkward, but they’re essential conversations to have for effective financial planning.

Americans today are getting married much later in life. What that means is that when people finally do tie the knot, they often have considerable assets, which is a shift from previous generations, when young married couples typically struggled just to make ends meet.

When an advisor becomes aware that a client is in a serious relationship, sometimes they will tiptoe around the topic or avoid it entirely, figuring it’s too personal to bring up. But there’s nothing inappropriate about asking unmarried clients about their relationships and how they could impact their financial planning. For sure, it could spark a series of awkward and potentially prickly financial conversations between a client and their future spouse, but these are conversations that need to happen.

Here are best practices for advisors who need to initiate these discussions:

Align Goals and Values. When people go on first dates, they rarely ask each other about their financial behaviors and long-term wealth plans. Even when a relationship becomes more serious, these things frequently don’t come up. The longer financial issues are ignored, however, the harder it is to come terms with them.

Advisors can protect their clients by explaining that talking and listening honestly about financial goals and values with their partner before marriage sets the stage for healthy wealth accumulation and long-term financial harmony for decades to come. This allows the client and their partner to communicate about saving and spending, budgeting habits, what type of home they want, what their retirement should look like, how their children’s education will be funded, estate planning for their heirs and prenuptial agreements. Clients usually take comfort in learning that their financial advisor would be happy to facilitate this conversation.

Encourage transparency. Once a soon-to-be-married client and their partner come to an agreement about goals and values, they naturally begin to open up about their respective financial situations. A surprising number of couples get engaged without previously revealing a long line of relevant financial information to one another, including income, total savings, investment holdings, property ownership, debt levels, credit scores, insurance policies, wills and estates, as well as alimony or beneficiaries from previous marriages.

While an advisor should already know all that information about their client, to serve the entire relationship well, they have to learn the same about their future spouse. People have been known to call off engagements upon discovering that their partner is saddled with massive debts. Others have been greatly relieved—and happy—to find out that their partner is in much better shape financially than they thought.

The nature of a partner’s finances can affect both the goals and action plans of an advisor’s client. For instance, as most know, federal student loan debt is forgivable, but private student loan debt obligations are not, and that could have an impact on an estate should a spouse die unexpectedly. Meanwhile, real estate holdings can also have big implications. If both members of a couple own a home, deciding where to live may not be as clear-cut as it may seem. Sure, one property might be a bit larger, more modern and in a better neighborhood, but it could also have far less equity.

Encourage them to combine their assets. Although married couples are increasingly keeping their finances separate, this practice can make it harder for an advisor to plan. Advisors have more flexibility and can make better decisions when they can see everything in one place. It’s also worth pointing out to clients that separated finances may lead to hidden actions and a lack of trust.

In many marriages, some small pools of assets do remain separate, typically in the form of an employer-sponsored retirement account or a monetary gift from a parent before the couple became serious. There’s also the caveat that depending on the complexity of a couple’s businesses or financial picture it may be advantageous to establish creditor protection by titling certain assets or structures in the name of a specific spouse rather than jointly.

Financial advisors serve the role of guiding discussions, raising concerns, clarifying details and easing tensions. Advisors who discuss these topics early increase their ability to retain clients and add new business from a referral network of the client’s partner. These are, of course, delicate conversations. But when you don’t have them, you run the risk that your client may already be having them with their spouse’s advisor—which means you’re in danger of becoming their former advisor.

Michael Rousseau is a financial planner at CCR Wealth Management, an advisory firm based in Westborough, Mass.