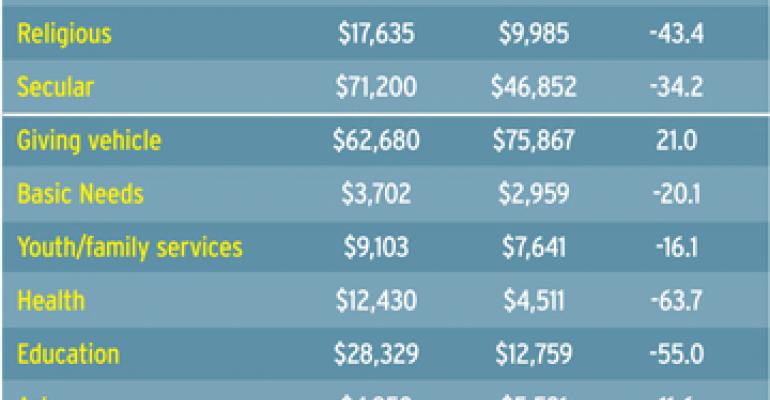 Bah, humbug. The latest study of charitable giving among America’s high-net-worth households shows a marked decline in generosity. The 2010 Bank of America Merrill Lynch report says that households averaged donations in 2009 of $54,000, down 34.9 percent from two years earlier, adjusted for inflation. Median donations were down 7.6 percent in that period, to $12,000.

Interestingly, donor advised funds keep gathering assets, and a survey by Boston College indicated a slight upturn in giving for 2010. If President Obama removes the tax advantage of charitable donations, you can expect donations to drop, according to the BoA Merrill Lynch survey.

The survey’s results indicated that the 2007 numbers themselves were down from 2005, when the average donation was $91,900 and the median was $15,700. The analysis, conducted with the Center on Philanthropy at Indiana University, randomly surveyed more than 800 households in affluent neighborhoods. The households had income of more than $200,000 and/or a minimum net worth of $1 million, excluding primary residence value. Half of the respondents had net worth of between $3 million and $20 million.

Claire Costello, national foundation executive for Bank of America Merrill Lynch, said last year’s economy played a role in the donation habits of the households in the poll. “Feeling financially secure” was among the top motivations affecting charitable behavior, with 71 percent of the affluent respondents reporting it as a factor in their decisions. Considering economic conditions, such as unemployment and gross domestic product, “We’re in a really down market,” Costello says. Then why would the results from 2007, before the financial crisis struck, be lower than those of 2005? Costello says the 2005 figure may have been unusually high because of contributions resulting from the Hurricane Katrina disaster; the difference between 2005 and 2007 donation levels, she adds, is not statistically meaningful.

For example, giving as a share of income remained “roughly” equivalent to 2007 —when donors contributed an average of 11 percent of their income — compared to 9 percent last year, she says. And while 35 percent of donors stopped giving to at least one organization in 2009, the survey found that percentage consistent with 2007 results. The survey also found a sharp increase in the number of wealthy households doing volunteer work, perhaps to offset lower financial contributions. Almost 79 percent of households surveyed did volunteer work; the share of those who contributed more than 200 hours rose from 27 percent in 2007 to 39 percent in 2009. The survey saw a link between those who volunteered and those who provided financial support. Households that did more than 200 hours of volunteering donated $75,662 to charity last year, or 63 percent more than non-volunteers. Costello says an increase in people with more time on their hands, either through retirement or unemployment, also can account for the growth in volunteerism.

“No one feels flush. No one feels like there’s extra anymore, even the highest tax bracket taxpayers,” says Mary M. Deatherage, a Morgan Stanley Smith Barney advisor in Little Falls, N.J., with $1.1 billion in assets under management. “The unintended result of having people feeling so tentative has been that a lot of very worthy goals have not been achieved.”

Data reflecting more recent measures of donor activity offer a more mixed picture. Fidelity Charitable Gift Fund closed its 2010 fiscal year last June with assets up 15 percent, to nearly $4.4 billion. Yet a national survey it conducted of people who will give more than $200 in 2010 found that 36 percent planned to give less (two-thirds of those who are giving less are considering non-cash donations, Fidelity said), while 55 percent planned to maintain the same level of donations in the fourth quarter as in past years.

Meanwhile, Schwab Charitable said contributions to its donor advised fund were $610 million for the first three quarters of 2010, up 274 percent from the comparable period a year earlier. “Everybody was off in 2009,” says President Kim Wright-Violich. The Center on Wealth and Philanthropy at Boston College this year predicted individual giving in the United States would increase by 3 to 4.5 percent.

The Merrill Lynch report also found that about two-thirds of the household surveyed would “somewhat” or “dramatically” decrease their giving if they received no income tax deductions for their contributions; that was up from 47 percent in 2007. The report also saw a 21 percent uptick in contributions to “giving vehicles” such as foundations or donor advised funds. That accounts to some extent for the increase in households that are using accountants (68 percent more than two years ago) and financial/wealth advisors (39 percent more) to advise them on charitable donation issues.

This story has been updated from an earlier version to reflect explanations for the difference between the 2005 and 2007 average household donations.