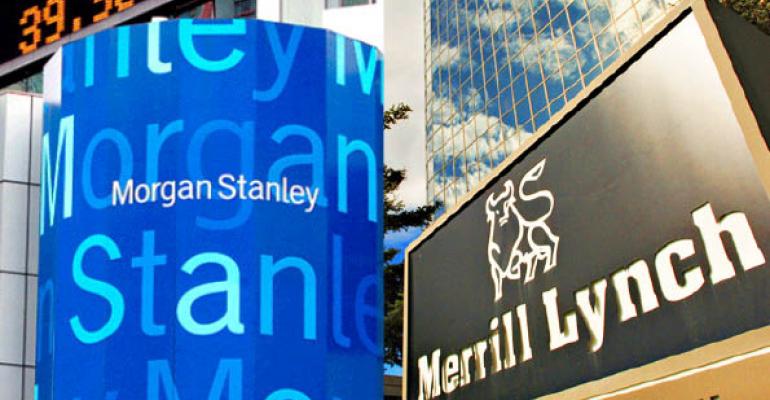 Two behemoth wealth management organizations enter a bar........and so the joke goes. Morgan Stanley and Merrill Lynch have been two of the most respected and recognized names in the world of wealth management and investment banking for decades. Each firm having its “best of times” and “worst of times” over the last decade culminating in dramatic change surrounding the financial crisis of 2008-09.

The discussion here today is to take a look at both wealth management firms as they exist today - post apocalypse - five years hence. What traits did they retain in the transition and what has changed dramatically.

Around the year 2000 both were well known for their respective powerhouse investment banks and sturdy wealth management cultures that lured advisors away from other firms, while keeping existing talent. Each organization took a completely different path over that past five years; so much so that they have become dramatically different from one another. Let’s take a look at those differences.

1. Global Reach. Both Morgan and Merrill were serious players across the globe when it came to investment banking business and operations throughout most of the 2000’s. Morgan leveraged its investment bank as a money printing tool, while Merrill used its prowess to do the same. At one point in the 2000’s both firms were generating better than 85% of all annual revenue from investment banking activities across multiple continents. Oh, how times have changed. The financial crisis took a torch to the “investment banking as the be all end all” business plan for both firms. But Merrill was taken a step further as it was purchased by Bank of America (not the most “global” name to be found) and within 36 months had sold off nearly all of its existing wealth management offices outside of the US (to swiss firm Julius Baer). Morgan, on the other hand, braved the storm - and while investment banking revenue has been somewhat de-emphasized they remain serious players globally. (It is common knowledge that Morgan’s syndicate department remains a strength for the wealth management unit.)

3. Crisis Management: This is a tough one. As mentioned in the beginning paragraphs both firms have had their repsective “best of times” and “worst of times” over the past decade. It is my belief that the true difference is evident from a leadership stand point. Currently, Morgan Stanley is led by James Gorman. Merrill Lynch is led by, ???, give me a second...I have to look it up. Get my point. Merrill is run by Bank of America. As it relates to crisis management - Morgan has remained a viable investment bank on the global stage, while Merrill simply has not. Another quick wrinkle - when retention contracts were dispersed at both organizations - Morgan made their contracts more lucrative as well as longer in duration (9 years). Merrill (read: Bank of America) tried to get off on the cheap, while instituting 7 year contracts. A shrewd move by Morgan as their largest producers are locked in (theoretically) for another 4 years.

4. Platform/Resources: Another tough one - as Morgan unceremoniously rolled out their 3D platform to much criticism. Merrill is undergoing a similar process with its new Merrill One platform “phased” roll out. This one may come down to simply my opinion. While Morgan took it on the chin with its 3D changes and execution - they did it all at one time at the end of the Smith Barney integration. While painful (especially for legacy Smith Barney FA’s) they chose the Seinfeld-esque method of “ripping of the band aid”. 18 months later - nearly zero mention of 3D. The jury is still out on the Merrill One platform (and its rumored higher fees for clients - always a crowd pleaser!).

It seems to me that Morgan Stanley finds itself in a better position going forward, when competing with firms like UBS, Wells Fargo, JPMorgan (don’t get me started) and the like. While Merrill has a rich heritage and a solid culture - it is as if the slow drip of Bank of America is slowly dimming the shine of the once proud “Thundering Herd”.

Andrew Parish is the CEO and founder of AdvisorHUB and managing director of Axiom Consulting.