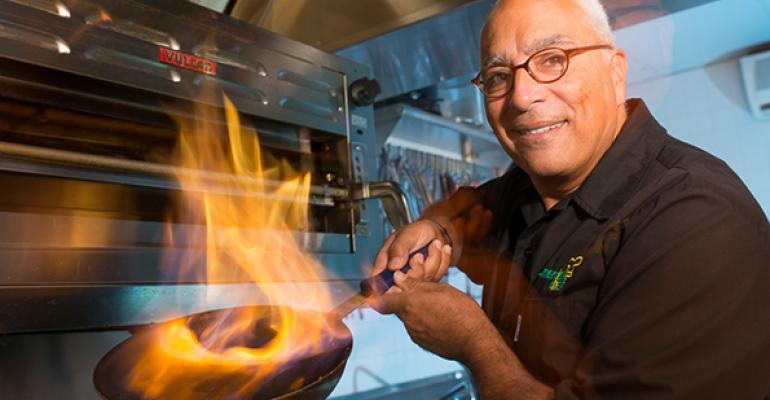 <p>David Ortiz operates his advisory firm, The Financial Chef, out of his restaurant in Coral Gables, Fla.</p>
Practice Management>Careers

Sometimes, the best training a financial advisor has is the years previously spent working in an unrelated profession

Ortiz trained at the Culinary Institute of America and was a professional chef for a time. He now heads an advisory firm called The Financial Chef, which he operates out of a restaurant he owns in Coral Gables, Fla. He meets clients there over meals he cooks himself; a typical day includes breakfast, a late breakfast, two lunches, a late afternoon sushi snack and a dinner.

Ortiz always eats with his guests (limiting himself to small portions). It’s not a typical advisor role, but he says it’s led to deeper relationships with his clients and opened the door to prospects. “I’ve won a couple of sizeable relationships, and they would never have taken a meeting with me without this,” says Ortiz, whose firm has about $60 million in assets.

According to Cerulli Associates, 89 percent of financial advisors came to the profession after working somewhere else. Sometimes those previous careers and jobs relate to their current work as a financial advisor, and sometimes not. But whatever the previous job, the contacts advisors made or the skills they acquired often help them in their new role.

What makes the advisory role particularly attractive to career changers? It’s a largely autonomous job that can fruitfully (and sometimes lucratively) absorb a variety of experiences. It’s as appealing to people who can work with numbers as it is people who excel at relationships. Have an area of expertise? You can exploit it as a financial advisor, say practice management consultants. Sometimes it takes working in the world and handling your own finances to appreciate how important the role is. “You’ve walked in your clients’ shoes and really understand the problems they face,” says John Nersesian, managing director of Nuveen Investments in Chicago.

Advisors often try to jumpstart their new career by tapping their networks for prospects. Gil Armour was an engineer for 21 years; after widespread layoffs in the aerospace industry, he became a financial advisor in 1994 and started a practice in San Diego in 2000.

With an analytical, detail-oriented approach to problem solving, Armour says he was in a particularly good position to attract other engineers as clients right off the bat. “I see advisors throw up their hands and say they can’t work with engineers because they’re too demanding; they want to know all the details,” says Armour, who has about $70 million in assets. “But I relish that.” Engineers account for about a quarter of his revenues and assets.

Similarly, June Ann Schroeder, a former nurse, became a financial advisor in the late ’70s, forming Liberty Financial Group in Elm Grove, Wis., which now has about $100 million in assets. About a third of her business is from people in the health profession, she says.

It’s not uncommon for advisors on their second career to have better luck with former colleagues once they’ve established themselves. Before Winnie Sun became a financial advisor in 1999, she ran her own company based in Hollywood providing audiences for TV shows, a practice known as audience production. During periods of hiatus in the industry, she got her CFP.

But when she joined Smith Barney, Sun didn’t approach her former contacts right away, figuring she needed to prove herself first. She made sure to stay visible, updating her profile on LinkedIn regularly. It wasn’t until she started her own firm, Sun Group Wealth Partners, that she started contacting former colleagues. “I felt I had more credibility at that point,” says Sun, whose firm has about $160 million in assets.  Many of the people she’d worked with when she was younger had also matured and, with more money, were looking for financial advice.

Robert Foley worked as a headhunter before becoming an advisor in 2002. During the market downturn, when a number of clients were out of work, Foley realized he had unique skills he could offer: He started coaching clients on how to navigate job interviews. “It helps them feel a little more in control and encouraged,” says Foley, now with Raymond James Financial Services. “It helps me deepen the relationship.”

When he was in his early 20s, Rich Van Loan spent four years selling cable TV services door to door. Eventually he rose through the ranks to be manager of a call center before becoming an advisor in 1997. During those first few years, he learned a great deal about the art of selling. That meant not only developing perseverance—he would continue knocking on doors even during snowstorms—but also how to figure out just how pushy he could be. “I was showing up at people’s homes unannounced selling something they didn’t even know they wanted,” says Van Loan, who is now with Ameriprise Finanical Services with about $75 million in assets. “So I would always be careful to apologize for the inconvenience and arrange to come back at a more convenient time. I basically still use the same approach now.”